Demonstrations to capture the student's imagination by Adrian Guy of Blundell's School. In this issue: Floating Gas Bubbles 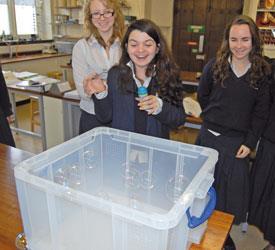 Several years ago, when I also taught physics, we used a demonstration to compare densities of liquids and solids called the 'knickerbocker glory' of densities. This was demonstrated in a tall gas jar and involved paraffin floating on water. Different solids were then added: ice floated on the water but below the paraffin (between the paraffin/water boundary), polystyrene floated on the very top (on the paraffin), whilst metal objects sank to the very bottom.

Then, many years later I was watching the popular US TV series MythBusters where they managed to float a paper boat on carbon disulfide gas. This gave me the idea of floating air bubbles on carbon dioxide.

This demonstration is enjoyed by all ages, but is particularly useful for Year 8 students when studying the properties of gases. It helps to reinforce the idea of density, which can be related to methods of collecting gases (upwards displacement of air etc), and to enforce the idea that gases, despite many being colourless, still have substance.

Avoiding draughts, allowing the reaction between the marble and acid to continue until completion, ie when the effervescence stops.

Table 1: Density of some gases1

Whilst the ideal behaviour of gases predicts that the molar volume of any gas is 24.5 dm3 at 298 K assuming perfect gaseous behaviour, their densities will differ depending on the relative molecular mass Mr. Carbon dioxide with a Mr of 44 g mol-1 should therefore be 22 times the density of hydrogen with an Mr of 2 g mol-1. So, providing the bubbles of exhaled air including the liquid bubble combined have a lower density than the equivalent volume of carbon dioxide, the bubble will float.

A more scientific method could be used to calculate this, involving estimating the size of a bubble (its volume), and estimating the mass by landing a bubble of exhaled air on a sensitive scale. Calculations could be made to work out the volume of carbon dioxide that would need to be displaced for weight to equal upthrust.

Given the information in Table 1 or using Mr or density data for various gases, devise combinations of gases that will float on one another. Better still, try this for a combination of gases where, for example, bubbles of ammonia will rise into a container of hydrogen (less dense) and appear suspended.

What else will float on carbon dioxide - will a normal party balloon of air still float?