When discussing intermolecular forces, polymers present a wide range of opportunities for demonstrations because of the sheer wealth of materials available. The use of some polymers relies on their sensitivity to particular solvents while others can be compromised unintentionally through exposure to the ‘wrong’ solvent. In this demonstration we investigate the properties of two polymers.

Students intuitively ‘know’ from their experience of polymeric materials that ‘plastics don’t dissolve’, so PVA makes for a great start. Among many other things, PVA is used in soluble laundry bags to reduce cross contamination from soiled bedding in hospitals and in ‘artificial tears’ for lubrication of dry eyes. It can also be obtained from fishing shops as PVA bait bags and of course in the liquid detergent pouches for your washing machine.

These materials show slightly different properties that can be revealed to your class. Simply load a PVA bait bag with approximately 5 cm3 of water coloured by enough food colouring to make a strongly coloured solution (a washing liquid pouch also works well, although the detergent turns the water cloudy) and suspend it in a beaker of water. The coloured water and sagging plastic form beautiful patterns in the water as the PVA dissolves.

PVA is prepared from poly(vinyl acetate) by transesterification with ethanol. As such, it presents another example of this type of reaction beyond the production of biodiesel and traditional soap. Intermolecular forces are the key here – the solubility of PVA can be controlled by the degree of hydrolysis and the corresponding number of hydroxyl groups available for hydrogen bonding to water. It is possible to obtain partially hydrolysed PVA laundry bags online for comparison, which only dissolve above 65°C.

Where PVA can dissolve in water, latex rubber, which contains no polar groups and lacks the capacity to hydrogen bond to water, does not. This makes it a great material for making water balloons (and also condoms). Here the sensitivity to solvents is reversed and can be revealed by exploring the action of glycerol and baby oil (mineral oil) on water balloons.

Take two latex party balloons and fill them with tap water until the rubber is stretched enough to begin stretching away from the bulb of the balloon towards the neck. You will know that the balloon is stretched enough once it begins difficult to pull enough material to form a knot. I suggest filling them in separate transparent plastic storage boxes, which will help to support the balloon as you fill (when full, it will not be able to support its own weight when suspended from the neck) and will contain the water when it bursts. Dimensions of approximately 25 cm × 25 cm × 30 cm work well.

When in front of the class, ask for a volunteer. Give them one of the balloons and 10 cm3 of baby oil (a mixture primarily consisting of mineral oil – see note). You will use glycerol with the second balloon. The class can be shown representative structures of mineral oil (n-pentadecane, at the lower end of the fraction is a suitable example) as well as the structure of cis-1,4-polyisoprene. Ask the class to predict which pair of chemicals will have more favourable interactions.

Invite the student to pour their baby oil onto their water balloon as you pour glycerol onto yours. Depending on the balloon, it may pop after only a few seconds. If not, the liquid can be gently spread over the surface by hand and almost immediately the baby oil balloon will burst. The balloon with glycerol will tolerate much more handling and should not burst at all. 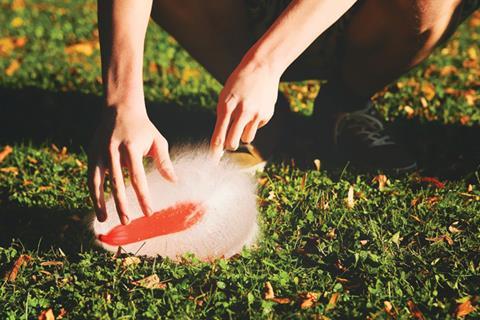 In this demonstration, we are not seeing dissolution, but how stretching the rubber allows us to exaggerate the effects of incompatible solvents. The highly hydrophobic rubber will be resistant to the polar, hydrogen bonded glycerol but enough non-polar alkanes from the baby oil are able to disrupt the chain-chain van der Waals interactions to rupture the balloon.

Despite mostly consisting of the same substances, baby oil seems to produce much more rapid results in this demonstration than mineral oil alone. It is possible that the additional surfactants and slightly lower viscosity of the fluid makes it easier to spread over the material’s surface and perhaps help it enter weak points in the rubber.

Acknowledgement: This demonstration has been modified from one I saw performed by Ashley Kent.

If it’s appropriate for your audience, you could carry out this demonstration using condoms instead of balloons.

Burst volumes or pressures are one way in which plastics have been tested for their strength. A study in Contraception measured the burst volumes of latex condoms following exposure to a number of solvents and found a 90% reduction following as little as 60 seconds’ exposure to products containing mineral oils.1

Some modern condoms are made from poly(urethane) and are far more resilient to mineral oils, as might be suggested from their more polar structure with the capacity to hydrogen bond.