Silane: an analogue of methane

Updated October 2017. This demonstration may be prohibited under the 2014 explosives regulations. We have removed the kit list and instructions from this article. 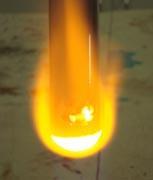 The silanes are generallymore reactive than their hydrocarbon analogues, and ignite spontaneously on contact with air. They also react explosively with F2, Cl2 and Br2. Silane itself is a reducing agent in solution - when bubbled through an oxygen-free solution of Fe3+ (aq), for example, Fe2+ (aq) is produced.1

The laboratory preparation of silane makes for some fascinating chemistry and a good demonstration. Magnesium silicide is made first, followed by the production of silane gas which ignites spontaneously in contact with oxygen.

The increased reactivity of silane compared with its analogue methane can be attributed to the readily accessible d-orbitals, available for bonding with attacking species. This is not the case with methane otherwise we would have major problems with our natural gas supply.

This demonstration is useful if you are discussing the relative stability to hydrolysis of CCl4 versus SiCl4 in year 13 (A2 chemistry, Edexcel Nuffield topic 16, for example). SiCl4 is hydrolysed readily by water because of the accessible d-orbitals.

The demonstration can also be used to show GCSE chemistry students how reactive magnesium is, or how stable silicon dioxide is - ie a giant covalent structure, which requires a very reactive metal such as magnesium to react with it. I have also used this demonstration when discussing activation energy.