The dehydration of sucrose

Create a smoking column of carbon

Sucrose is a disaccharide with the formula C12H22O11. On hydrolysis, it yields the two monosaccharides, glucose (aldohexose) and fructose (ketohexose), and on dehydration produces a complex carbonaceous solid residue.

The reaction between sucrose and concentrated H2SO4 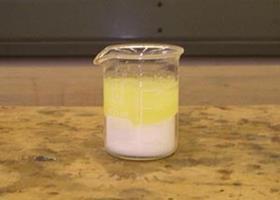 With this reaction, there is a time delay of almost one minute before the reaction proceeds. The acid starts to go yellow as the dehydration begins. The rate of dehydration then accelerates as the acid heats up because the reaction is exothermic. As the sugar molecules are stripped of water, the heat generated turns the water into steam which then expands the remaining carbon into a porous, smoking, black column. This expands out of the reaction vessel, producing a choking acrid vapour and the smell of burned sugar. At this stage I normally remind my students that sulfuric acid is highly corrosive and will burn skin so they must avoid contact with it. 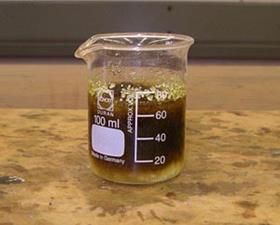 Put the sugar into the beaker and stand on a heat-proof mat. With care pour the acid onto the top of the sugar and then stand back. Since this demonstration produces sulfur dioxide as a waste product, it should be performed in a fume cupboard.

Sulfuric acid contact with the eyes or skin can cause permanent damage. Concentrated solutions of acid are extremely corrosive and when sulfuric acid is dissolved in water enough heat is released to make water boil. Sulfur dioxide is toxic in high concentration and is a severe respiratory irritant at lower concentration. The typical exposure limit is 2 parts per million (ppm), a level which can readily be exceeded in a laboratory with poor ventilation. Some people, especially those prone to asthma, may be especially sensitive to sulfur dioxide. In the presence of moisture sulfur dioxide forms an acidic, corrosive solution, which in contact with the skin or eyes may lead to burns. 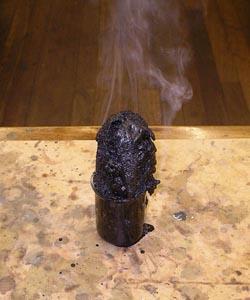 Precise amounts of chemical are unnecessary but do not use any other form of sucrose other than normal (household) granulated sugar.

Pure sulfuric acid is an oily liquid. Odourless and colourless, the pure acid freezes at 10.5°C to produce a white crystalline solid consisting of a three dimensional hydrogen-bonded network which persists in the liquid and aqueous state, making such solutions viscous. The pure acid decomposes slightly on standing and warming to evolve sulfur trioxide and water. Thus the acid reaches its maximum boiling point mixture of 330°C and its maximum concentration of 98.33 per cent.

Concentrated sulfuric acid has a molarity of 18M and has a strong affinity for water, making it very useful for drying gases which it does not react with, eg  SO2, Cl2, N2, and O2. As well as being a good reagent to dehydrate carbohydrates, concentrated H2SO4 also dehydrates crystalline hydrates, organic alcohols and acids. In the reaction with sucrose, the acid dehydrates the carbohydrate to carbon and then oxidises the carbon:

The acid is a powerful oxidising agent as shown by its reactions with solid halides:

These reactions can be used to good effect when teaching oxidation number and balancing equations. It is worth noting that a solid potassium bromide and concentrated sulfuric acid mixture is used to convert organic alcohols to halogenoalkanes.