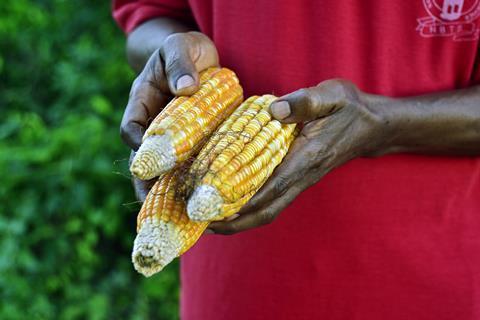 Food security is an urgent global issue and it is an increasingly serious problem in Africa where the challenges of supporting a rapidly growing population are resulting in hunger and poverty.

One of the main causes of the challenges witnessed in Africa is poor crop yields largely caused by insect pests, weeds and degraded soils. Improving agricultural output is especially vital for subsistence cereal farmers (especially maize farmers) who rely on what they grow to feed their families.

Many insects are beneficial to an ecosystem and assist production of crops through pest control and pollination. Other insects can be harmful to agriculture production and damage or kill crops. Insect larvae that bore into plant stems, known as stemborers, are examples of pest insects. The caterpillars of moths attack maize and other cereal crops such as sorghum, millet and sugarcane. Damage is caused by larvae, which first feed on young leaves and then enter the stems, killing the plant as it grows.

Striga weeds, also called witchweeds, are another significant problem. These parasitic weeds prevent 30−100% of affected crops growing to more than 30 cm tall. When these weeds start to grow from seeds underground, they attach to the maize causing huge damage before they are even visible above ground.

The third main battle for farmers in sub-Saharan Africa is dealing with eroded soils with low fertility. Improving soils requires fertilisers that cost more money than subsistence farmers can afford. These issues are complicated further by the increasingly hot and dry weather conditions associated with climate change and rapid population growth that has seen the human population more than triple in the second half of the 20th century. Increasing agricultural production is therefore a major challenge.

No single approach can deliver sustainable agriculture and a broad perspective that encompasses the whole plant system is essential. The interactions of all the species in the environment need to be considered and it is chemistry that can help us understand natural insect–plant, plant–plant and insect–insect relationships.

Semiochemicals (signal chemicals) are the chemicals involved in the interactions between the plants, weeds, pest insects and beneficial insects. They are non-toxic and convey information about the plants and animals in the environment. When an organism produces one or more biochemicals that influence the growth, survival and reproduction of other organisms, this is called an allelopathic effect. A detailed understanding of these chemical interactions is behind the development of a pest management approach called push–pull technology. Here, crop protection is provided by exploiting natural plant and insect interactions, rather than direct application of insecticides or herbicides.

Semiochemicals and smell play a role in protecting us from mosquitoes. Biting insects use these chemical cues to avoid certain people. Find out how studying these interactions is leading to new repellents.

Semiochemicals and smell play a role in protecting us from mosquitoes. Biting insects use these chemical cues to avoid certain people. Find out how studying these interactions is leading to new repellents (http://rsc.li/1Djdp63).

The push–pull system was developed in 1997 by scientists at the International Centre of Insect Physiology and Ecology (Icipe) in Kenya and Rothamsted Research in the UK, in collaboration with other national partners. The technology uses natural plant chemicals that drive insect pests away from crops and attract them to other host plants, rather than synthetic substances. This system has proven to be an ideal resource to tackle the long-term struggle against poverty and hunger in Africa in an environmentally friendly way.

The system involves growing certain crops in proximity of others, a method known as intercropping. Cereals are intercropped with a repellent plant, ‘the push’, which diverts pests away from the main crop. An attractive trap plant, ‘the pull’, is then planted as a border crop around this intercrop which pulls the pests towards it.

Stemborers, like this Mimusop stem borer (Pachyteria dimidiata), first feed on young leaves and then enter the stems, killing the plant as it grows

One of the repellent intercrops that researchers found to be effective is desmodium. This plant naturally gives off volatile chemicals that mask the appearance of the cereal crop by making it appear damaged, which makes the stemborers see the crop as a bad place to lay eggs and prevents them from attacking it. At the same time, the chemicals that are repugnant to these pests are actually attractive to parasitic wasps, so these come to the plant to feed on the pests giving the crops more protection.

As well as working to control the stemborers and striga, the roots of the desmodium intercrop provide an additional benefit to farmers. Because it is a legume it fixes atmospheric nitrogen into the soil, providing it in a form that is accessible to plants. Furthermore, because desmodium is a perennial plant living from one year to the next, it also adds organic matter to the soil, helps to conserve the soil moisture and enhances soil biodiversity. This helps improve both the soil health and the fertility. It also helps to protect the soil against erosion through providing ground cover along with the surrounding grass trap crop.

Around the edge of the crops in the push–pull system, an attractive ‘pull’ plant is used to draw pests away from the main crop. One such trap plant is called napier grass.

Researchers found that when border rows of napier grass were planted around the maize field, the stemborers were enticed to lay their eggs on the grass rather than the maize. The trap plants emit significantly higher amounts of the compounds that are attractive to stemborers than maize, and the amount emitted also increases 100-fold within the first hour of nightfall, known as the scotophase, which is when moths are most actively seeking host plants to lay their eggs in.

These grasses also have their own effective defence mechanisms against attack from the stemborers. When the larvae work their way into the stem, the grass secretes a sticky gum, physically trapping the borer and preventing most larvae from completing their life cycle. The grass also attracts additional stemborer predators such as ants, earwigs, spiders and cockroaches, further protecting the cereal crops.

Not only is napier grass helping to increase maize yields, farmers are provided with a ready supply of grass to feed their livestock or sell to other farmers. This has resulted in cows and goats being introduced in the area as, with forage available, farmers can also raise animals for milk production.

The push–pull system is an illustration of how detailed knowledge of chemical mechanisms can be applied to solve some of the major challenges faced in the world today. It shows that clever applications of science can successfully support the interests of small-scale farmers and promote food security and sustainable livelihoods. 80% of the population of sub-Saharan Africa are smallholder farmers and by requiring few resources, the push–pull system is suited to helping them and tackling the natural resource problems they face. To date, it has been adopted by over 90,000 African farmers and half a million people rely on it for food security. 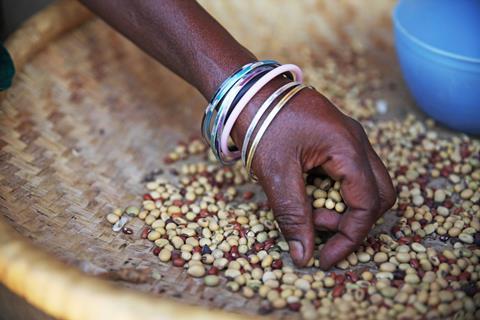 Tony Hooper, one of the scientists who worked on the technology, explains the reason for its success: ‘Push–pull technology is popular among East African farmers as it fits with cultural mixed cropping practice. It typically doubles or triples yield but also provides the means to produce surplus forage, milk and meat as well as grain. This creates access to markets for the first time for many smallholders so is wonderfully effective in lifting farmers from poverty.’

Scientists have now turned their attention to ways this system can be developed further. Developing more resilient versions of the system will ensure that push–pull can continue to spread into other African countries. For example, farmers that battle with arid conditions face even tougher challenges in growing crops. Drought tolerant cereals such as sorghum are grown in arid areas and can also be protected by push–pull technology using trap crop and desmodium species that are drought tolerant. Therefore, if the crops used in the system can withstand these arid conditions, the push–pull system can be used by these farmers too. These more resilient crops will also be vital in facing the long-term challenges that climate change will bring and progress has already been made by scientists in this area.

The next big challenge that scientists need to overcome is developing a system that uses an intercrop that is edible by humans, as well as able to stop the striga. Desmodium works well but it is only suitable as animal fodder. Many smallholder subsistence farmers in Kenya would prefer intercropping maize with edible crop legumes rather than cattle fodder. In particular, there is an immediate demand for legumes such as cowpea or beans that supply protein in human diets, but neither of these crops demonstrates any suppression of striga and so they cannot be used. However, now that some understanding has been gained of the mechanism by which desmodium suppresses striga, there is the potential for transferring these biochemical traits into edible legumes. If scientists can find a way to do this, the farmers’ agricultural productivity could increase further and it could take us another step closer toward tackling the global challenge of food production and ensure that we are able to feed our growing global population.

As populations increase and resources such as water and nutrients become scarcer, it is imperative we develop ways to improve food yields, cut food waste and ensure people have access to a plentiful supply of safe and nutritious food. Find out more about the role the chemical sciences has to play in to helping to feed a growing global population.

As populations increase and resources such as water and nutrients become scarcer, it is imperative we develop ways to improve food yields, cut food waste and ensure people have access to a plentiful supply of safe and nutritious food. Find out more about the role the chemical sciences has to play in to helping to feed a growing global population (http://rsc.li/1bA56NO).