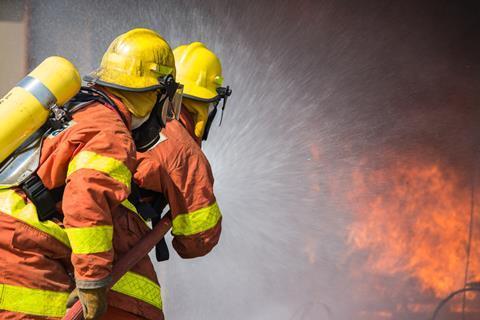 In 1985, at the Bradford City football ground, white smoke was seen emerging from beneath the terraced seating of the 77 year-old wooden building. Within two minutes the main stand was engulfed in flames. The speed of events was fast and 56 fans were trapped and died while around 200 were injured and others suffered from smoke inhalation. It was concluded that the fire was an accident and not arson. How can you tell the difference?

Arson is a common crime with around 100 000 cases a year in the UK, many of them caused by children and adolescents. The pranks can kill and cause billions of pounds worth of damage.

The investigation of fires is one of the most difficult procedures in forensic science because the fire destroys important evidence as it develops and fire fighting can frequently eliminate what few clues remain.

Investigation begins with the experienced eye of the fire-scene investigator who has an extensive knowledge of how materials behave at high temperatures. Establishing the cause of the blaze means finding the seat of the fire. This is done before any laboratory samples are collected. And despite the problems the fire investigation scientist can nearly always come up with the answer to that most important question: how did the fire start?

Fire is a form of rapid oxidation known as combustion. Fire requires a reducing agent, an oxidising agent and thermal energy to start the reaction.

In cases of arson, accelerants – substances used to initiate or promote a fire – are often used. Flammable liquids like petrol or paraffin are common accelerants.

Consider a situation in which an accelerant (eg petrol) is absorbed by a rag. The rag is then pushed through the letterbox of a house and then ignited with some burning paper posted through after it. Surrounding materials such as textiles, paintwork and wood heat up and catch fire and a serious blaze ensues.

A typical fire, such as a house fire, involves a variety of fuels, varying amounts of oxygen and a range of temperatures. All this produces some complicated chemistry. Fire chemistry is high-temperature chemistry and this means free-radical chemistry.

The main fuel in house fires is wood, which is mainly cellulose as well as small amounts of low molecular mass compounds such as phenols and ketones.

As the wood heats up, usually because of the radiant heat from a flame, a flamable vapour forms around the wood from volatile compounds released from the solid. This glowing hot vapour is the flame. As the temperature increases the cellulose begins to pyrolyse – decompose without oxygen – adding to the flammable vapour and the flames.

In many fires conditions can change rapidly and combustion reactions seldom go to completion – all the fuel being converted to CO2 + H2O – because eventually the oxygen level is insufficient to sustain the burning process. Therefore, the atmosphere in a burning building is a complex mixture of volatile compounds.

In the initial search after an arson a piece of accelerant soaked rag may be found. While we are tempted to think that all of the petrol would have burnt away, it is often the case that residues – maybe only trace amounts – remain. With a sufficiently sensitive method of analysis these can be analysed.

With samples from a fire scene the forensics laboratory uses gas chromatography (GC) – discussed in the previous article of this series (InfoChem, July 2010) – coupled to mass spectrometry (GC-MS). In our example the rag from the fire scene is sealed in a plastic bag and rushed to the forensic laboratory. It, or a part of it, is placed into a gas-tight bottle. The bottle is maintained at a certain temperature and vapour is drawn out with a syringe and injected into the GC-MS. The GC part works as described previously but the GC separated molecules go directly to a mass spectrometer.

The spectrometer converts the gas molecules to positive ions by electron loss before a magnetic field then accelerates the ion beam. The ion beam is deflected by the magnetic field by an amount that is proportional to the mass of each particular ion. Similarly, changing the strength of the magnetic field enables ions of a particular mass to be directed to a detector and in this way two main types of information are provided – molecular mass and fragmentation pattern. Using published tables of data, it is possible to identify the molecule passing through the MS as it leaves the GC section.

Examination of a fire scene requires a multidisciplinary approach and chemistry plays a major part. Chemistry’s role is crucial to identify trace amounts of substances from post-fire debris. Although many fires are not due to arson it is now normal practice to treat each fire scene as if it were a crime scene.

And what of Bradford?

At Bradford the whole event was recorded as the intention was to televise the game – between Bradford City and Lincoln City. This helped the investigation track the path of the fire.

It was concluded that a discarded match or cigarette end had been dropped and fallen beneath the floorboards where there was an accumulation of litter. Bradford City FC had been repeatedly warned about the litter posing a fire risk and had plans to upgrade their stand at the end of the season as they were to be promoted for the next season. In fact, a souvenier edition of the local paper, printed to celebrate the presentation of silverware to the club before the game, detailed the extensive renovation work that was due to take place over the summer.

The Popplewell Inquiry into the Bradford City fire led to legislation to improve the safety at UK football grounds. One result was the banning of new wooden grandstands being built at any UK sports grounds.

Today Bradford still remembers the fire with an annual memorial service on the 11th hour of the 11th day of May, and representatives from Lincoln City always attend.

The Bradford City ground has two memorials to the fire and the team’s shirt collars now always have a black trim to remember the 56 people who died in the accident that day. The home end of Lincoln City’s ground Sincil Bank is named the Stacy-West stand in honour of Bill Stacey and Jim West, two Lincoln City supportes who were among the dead.