Biofuels: the next generation

First-generation biofuels made from carbohydrate-rich food crops, such as corn or sugar cane, have come under scrutiny as they compete with food crops for land use. Chemists are now turning their attention to dead wood, algae and genetically-engineered microorganisms to develop second-generation biofuels.

Climate change has risen to the top of the political agenda in recent years. Growing awareness of this problem has also raised the profile of fuels made from biomass - ie biofuels. Following the example of Brazil, which has used bioethanol as a transport fuel for many years, other countries have stepped up their production of fuels from carbohydrate-rich crops, such as corn or sugar cane. These fuels were initially seen as 'carbon neutral' because regrowing the crops would absorb the same amount of carbon dioxide as was released when burning the fuel. In 2003 the European Union set a target of replacing 5.75 per cent of all transport fossil fuels (petrol and diesel) with biofuels by 2010.

From food crops to agricultural waste

However, the increased production of such biofuels has quickly shown up their shortcomings. Fuel crops have begun to compete with food crops for land use and are already making food less affordable in developing countries. Furthermore, their green credentials have come under fire as the intensive farming methods required for efficient mass production of fuel crops use significant amounts of energy. By the end of 2007, it had become clear that the potential solution had become part of the problem.

Experts now pin their hopes on biofuels that are not produced from edible plant materials, but from the woody parts of plants that end up as agricultural waste, including straw and sawdust.

What kinds of materials are available depends on the specialisation of the local agriculture. The most promising starting material may be sugar cane residues ('bagasse') in the Caribbean, straw in Canada, and sawdust in Scandinavia. Even food waste, from densely populated areas could be converted into biofuel, as has been demonstrated by the North American Biofuels Company which operates in New York and New Jersey. While the end product, eg biodiesel or bioethanol may be indistinguishable from current biofuels, the production pathways will need to be radically different and will require new technology.

The key advantage of the existing, 'first-generation' biofuels is that they are easy to make with established technology, not fundamentally different from that of making vodka or cooking oil. To produce bioethanol, carbohydrates are hydrolysed into sugars that are fermented to form alcohol, which is then distilled. Plant oils from rapeseed or soy beans simply need to be extracted followed by catalytic transesterification to be turned into biodiesel.

By contrast, making use of the indigestible parts of plants requires complex procedures that can crack their tough structures, which are based on lignocellulose. This fibrous material is made up of cellulose, hemicellulose and lignin (see Box 1). The former two compounds are carbohydrates, which can in principle be hydrolysed into sugars and thus fed into the established procedures to make bioethanol. Separating cellulose and hemicellulose from the unfermentable lignin, however, requires steam and thus a lot of energy. Lignin is currently burnt to generate heat or electricity.

One general approach that can handle the lignin and indeed turn the entire wood into fuel, is the biomass-to-liquid (BTL) process. Fast pyrolysis (heating in the absence of oxygen) of the biomass results in a liquid oil, which can then be refined to syngas (synthesis gas, a mix of carbon monoxide and hydrogen):

thus opening up synthesis routes to a range of products that would normally be made from petroleum.

At the beginning of 2008 Choren Industries in Germany completed building a small industrial refinery for BTL diesel in Freiberg, Saxony, which is expected to run to full capacity by the spring. Shell chemists helped to develop the process used to convert the syngas into diesel fuel, which is a variant of the established Fischer-Tropsch procedure.1 (The Fischer-Tropsch process, invented by German chemists Franz Fischer and Hans Tropsch in the 1920s, is a catalytic reaction that converts syngas into a range of liquid hydrocarbons similar to petroleum:

thus allowing the synthetic production of fuels and other petrochemical products. Historically it was used in Germany where coal was abundant and oil scarce.)

The pilot plant is due to produce 13 500 tonnes of BTL diesel per year, using wood waste and straw. In the long term, however, the company has much bigger plans. Choren Industries believes that with wood waste alone, it can produce 2.5 million tonnes of fuel per year, matching the output of 11 traditional petroleum refineries. With this in mind, Choren want to build a large industrial refinery at Schwedt for operation in 2012.

Meanwhile Oxford University spin-out company Oxford Catalysts is also developing new technologies aimed at the production of fuels from wood waste, but is adopting a decentralised approach with a larger number of facilities operating on a much smaller scale. Among other things, the company develops Fischer-Tropsch catalysts that are economically viable in much smaller facilities.2 The idea is that small, transportable, units could use the waste where it is produced, avoiding the need to transport the biomass which may only hold a small amount of usable energy per weight. With this approach, the large scale flaring of natural gas at oil production sites could be abolished, because gas could be turned into transportable liquids.

At the moment, it still appears possible that radically different approaches may develop into more efficient ways of turning wood and other waste materials into fuels. Chemists in many laboratories around the world are working on improved methods and new catalysts for biomass utilisation.3 For instance, Ferdi Schueth and his team at the Max Planck Institute for coal research at Mülheim, Germany, have recently shown that a combination of ionic liquids as solvents and solid acids as catalysts can degrade solid wood to small oligosaccharides, which can then be fermented.4

While many researchers focus their efforts on recycling agricultural waste and wood, others are looking to produce fuel from scratch. One idea that is rapidly gaining currency is to produce new microorganisms for the industrial production of fuel which will require only carbon dioxide and sunlight for growth. 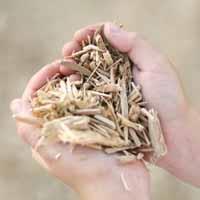 Wouldn't it be good to make use of such waste?

Craig Venter, the geneticist who pioneered the shotgun-sequencing of microbial genomes in the 1990s, and then went on to launch the race for the human genome, is believed to be working on the creation of novel microorganisms which could be tailored towards the production of fuels. Part of the appeal is that the metabolic cycles of such organisms could be designed and optimised to the extent that they would produce only desirable products and no waste. However, there will inevitably be ethical concerns over scientists creating new life forms and possible impacts if these escape into the environment.

In a less radical approach, other researchers are considering the advantages of engineering specific biomolecules, particularly enzymes, to degrade lignin. For example, Agrivida,5 based at Cambridge, Massachusetts, has developed maize plants that produce an enzyme which degrades cellulose. The trick is to make this enzyme switchable so that the plant does not self-destruct while it grows in the field, but can be ordered to degrade its own cellulose after it has been harvested. One promising approach pursued by Agrivida is a temperature switch. By getting the plant to produce a cellulose-degrading enzyme from heat-adapted (thermophilic) organisms, which only becomes active at temperatures around 60°C, the company can switch on cellulose decomposition simply by heating the biomass to this temperature.

The rapidly growing information on genomes of many different organisms offers other routes towards efficient conversion of biomass to fuels. For instance, the genomes of the microbes degrading cellulose in the stomachs of ruminants could yield as yet unknown enzymes that would help in this endeavour. Moreover, the knowledge of plant genomes could help to identify which plants that are not yet used in agriculture would be best suited for domestication and use as biofuel feedstock. While the traditional domestication of agricultural plants took millennia, the knowledge of modern genomics should enable scientists to derive suitable new varieties within years.

Another school of thought asks why should we develop new organisms when we have algae? The US Department of Energy (DoE) had funded research into the production of biofuels from algae as part of the Aquatic Species Program from 1978-96, but shifted resources to corn ethanol when it appeared that algal fuels would cost more to exploit. Rising oil prices in 2007-08 have stimulated a renewed interest in the algal alternative. 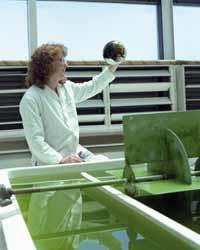 Algae have the advantage, however, that they don't compete with food crops for land use. They can be grown in purpose built reactors, in ponds created on desert land, and indeed in fenced-in areas of coastal waters. Moreover, much of their biomass will be lipid membrane, which can be transesterified to biodiesel, leaving a residue that will be rich in protein, carbohydrate and water, which can be used as animal feed or fermented to make alcohol.

Solix Biofuels, founded in 2006, is currently developing reactors for the growth of microalgae. The technology may be useful for closed circle recycling of carbon dioxide emissions from power stations. By contrast, PetroSun BioFuels, a subsidiary of the oil company PetroSun, has started growing algae in open saltwater ponds covering 1100 acres in Rio Hondo, Texas. In its purpose-built refinery on site, which was launched in April 2008, PetroSun aims to produce 4.4 million gallons (16.7 million litres) of algal oil per year. Part of the production will be used to make jet fuel.

Other companies, including Chevron and Shell, announced new collaborative projects exploring the possible production of biofuels from algae in 2007 and 2008. Chevron has signed up to a collaboration with the DoE's National Renewable Energy Laboratory (NREL), marking a surprise U-turn for the DoE after 11 years. Shell entered an exploratory project in collaboration with HR Biopetroleum, which already grows algae in ponds on the coast of Hawaii.

In October 2008, the Carbon Trust (UK) announced the 'algae biofuels challenge', a scheme which will pay up to £26 million in grants to develop technology and infrastructures to make algal biofuels viable.

It remains to be seen whether any of these efforts lead to actual fuels appearing at petrol stations. In this field, even the best intentions can be thwarted by unexpected twists and turns of markets and politics. However, with high oil prices and growing awareness of the climate crisis both among politicians and the general public, the time for second-generation biofuels has never been better.

Michael Gross is a science writer based in Oxford. He can be contacted via his website.

The tough fibrous material in wood consists of three main components that behave very differently in chemical reactions. Around 41 per cent of the material is made up of cellulose, which is a simple polysaccharide made of glucose monomers linked by 1,4-glycoside bonds. Cellulose is surrounded by hemicellulose (28 per cent) which is also a polysaccharide, but made up of a variety of monomers including glucose, galactose, mannose, xylose, arabinose, and glucuronic acid.

The polysaccharide fibres are held together by the highly branched polymer lignin (27 per cent), which consists of phenylpropane units held together by ether and by C-C bonds. This component confers rigidity to the whole fibrous material and is the most difficult to crack in any reaction aimed at biomass utilisation. 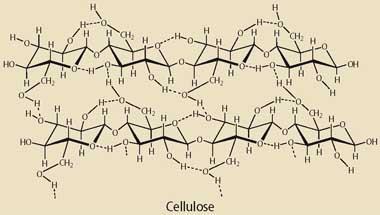 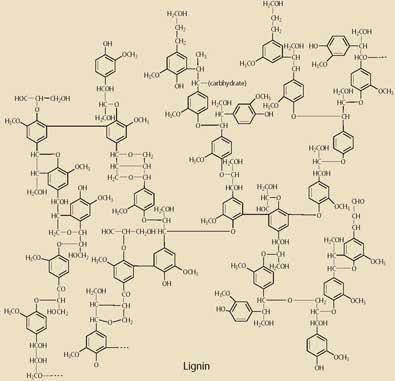