Bringing molecules into the third dimension

Teaching many key concepts in chemistry, such as chirality, requires the visualisation of molecular structures in 3D, something that students often struggle with. Although molecular modelling kits help, playing around with plastic sticks and joints often isn’t enough to help students ‘see’ molecules in their true form. It doesn’t help that chemical structures are normally drawn in 2D, for simplification reasons, when most molecules are in fact 3D. In the classroom, drawings using wedged and dotted bonds - that have been coined 2.5D - are often the best that can be achieved. Looking at molecular structures on a computer, however, offers students the chance to not only visualise, but also rotate, invert and perceive the symmetry of molecules. 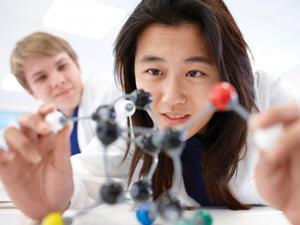 The Cambridge Structural Database (CSD) – compiled by the Cambridge Crystallographic Data Centre (CCDC) – is the global repository for small-molecule organic and metal-organic crystal structures and holds over 700,000 real 3D crystal structures. Over 700 of these structures are freely available in the WebCSD teaching subset. Each 3D structure is selected by typing in a unique six or eight letter refcode used in the main CSD database and can be visualised and manipulated using either an embedded JMol or Astex viewer. Simple measurements of bond lengths, bond angles and torsion angles (the degree of planarity) can also be made for each molecule, and the molecules can also be viewed in genuine 3D using widely available low cost 3D glasses. This teaching subset was discussed in a 2011 article.

In collaboration with Greg Ferrence from Illinois State University, US, the CCDC has developed several undergraduate teaching exercises for use with this teaching subset. Subjects covered include aromaticity, ring strain and conformation, valence shell electron pair repulsion, and hapticity. In 2011, Newcastle University and the CCDC began a new collaborative effort to develop teaching activities initially for school outreach use.

The purpose of this collaboration was to bring the database and its benefits to the attention of younger children and their teachers. The initial idea was to develop activities which could be disseminated for use in outreach visits by school-aged children into university chemistry departments, to showcase the importance and application of x-ray crystallography. It rapidly became apparent that the remit and objectives could be a lot broader and more appealing than this. It was decided to produce a series of short activity sheets that require students to look up structures in the free teaching subset, accessed by WebCSD, and answer questions about them.

The sheets were to cover a range of topics across UK A-levels and comparable qualifications globally – to be used either as self-study, teaching and learning support in lessons or revision activities. We decided to develop a range of sheets for each topic, with each sheet being a maximum of two sides of A4 in length, thus allowing them to be used easily and accessibly next to the PC or laptop displaying the crystal structures.

The sheets produced for each topic consist of a basic theory sheet plus worksheet(s) with answers that cover the basics of major post-16 specification requirements, and then an extension version containing greater detail than is required for post-16 specifications. The extension theory sheet and worksheet(s) are useful as a teaching, review and revision resource for foundation or first year undergraduates or for post-16 outreach activities on campus. 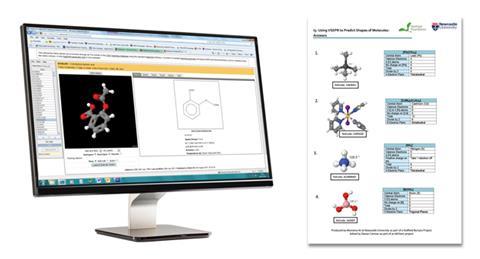 To complete the worksheets, students must look up structures on WebCSD

One of the key features of these resources is that they have all been suggested, designed and produced by students. Initially these were year 12 school students based at Newcastle University for summer holiday Nuffield Research Placements, and more recently final year MChem project students.

In August 2011, the first Nuffield placement student (Hollie Staward from Heworth Grange Comprehensive in East Gateshead) produced an initial set of activities and, more importantly, laid the groundwork for the format and direction for the others who were to follow. The following summer, 2012, three further Nuffield students (Mumena Ali from Sacred Heart Catholic High School in Newcastle, Gabriel Bramley from St Robert of Newminster Catholic School in Washington and Emma Burnett from St John’s School in Bishop Auckland) had an extremely productive four weeks producing many theory and worksheets. Topics covered by these summer students included isomerism (E/Z and optical), structure of benzene, VSEPR (shapes of molecules) and basic shapes of transition metal complexes. Their achievements were all the more impressive when you consider that several topics were UK A2 level so they had to teach themselves about the topics from scratch before they could begin to write the sheets. 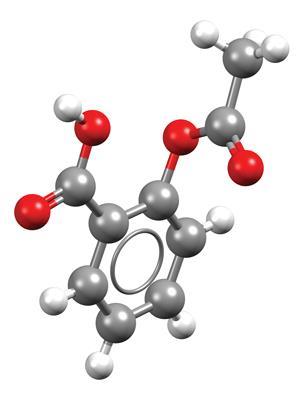 A dedicated webpage was set up on the Newcastle University school of chemistry’s website to host the resources and allow free download and use by all.5

Various MyRSC blog groups and latterly Twitter have been used in an attempt to reach a wider audience for these resources.

In autumn 2012, it was realised that a student able to work on the project for a more substantial time period than four weeks was needed to gel the project together. It was decided to offer the project as a final year MChem research project. MChem projects in chemical education have been offered at Newcastle University since 2010-2011. These projects involve either developing new experiments which can be used in the university’s chemistry outreach laboratory facility or new and innovative chemistry teaching and learning resources. The students who opt for the projects are often, but not always, interested in a future career in teaching and indeed the majority have gone on to do a PGCE after graduation.

Steven Carman was the 2012–2013 MChem project student tasked with reviewing the collection of topic theory and worksheets already created, plugging any gaps and identifying any additional topics not already covered from searching through UK A-level, Scottish Highers and International Baccalaureate specifications. The only proviso was that he was not allowed to alter or replace any of the sheets that had already been produced, as the peer-produced resources aspect of the project was one we were keen to retain. Steven was permitted to produce alternative or complementary worksheets where he felt that this was necessary or appropriate.

Steven prepared sheets covering the new topics organic functional groups, structural and conformational isomers, cis-trans and fac-mer isomers of transition metal complexes plus alternative or additional worksheets for several of the existing topics. This project is still ongoing and we would welcome suggestions for either additional worksheets for existing topics or potential new topics.

Steven trialled many of the sheets with various groups of students studying A-level chemistry both on campus and in local schools and gathered feedback through an online form he designed. Feedback was also received from around the world by blogging and tweeting the website link, again this was collected using the online form. 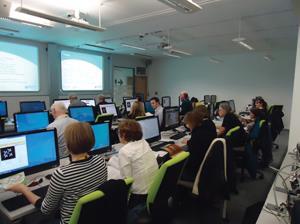 Teachers trial the resources at the ASE annual conference

The overwhelming majority of the feedback was very positive, with both students and teachers agreeing that the sheets were useful and they would use them again and recommend their use to others. Two major areas for improvement identified from user feedback were to improve the instructions for the use of the interface that accesses the free teaching subset (WebCSD) and for many teachers to include a list of important molecules with their refcodes as the teaching subset isn’t searchable. Steven addressed the first by making several screen-capture video tutorials using the screen recording and video editing software Camtasia to demonstrate how to perform various tasks on the web platform, from how to find the webpage to measuring bond lengths and displaying the molecules in 3D. These tutorials are on both a dedicated YouTube channel and the university’s website. He also produced the list of key molecules as a text document. This is currently being set up as a searchable spreadsheet to enable easier location of a specific molecule.

Selected sheets were also trialled as part of an activity on Newcastle University’s chemistry-specific Headstart Summer School, and also on the university’s spectroscopy workshops for visiting A-level students. Additional teacher feedback has also been obtained at various conferences, including ChemEd-Ireland in Limerick in October 2013 and the Association for Science Education (ASE) annual conference in Birmingham in January 2014.

A 2013–2014 MChem project student, Leticia Prince, worked on the continuation of this project. She took a different approach and produced self-contained lesson resources – comprised of a PowerPoint presentation, theory sheets and worksheets with answers - to enable the use of crystal structures contained in the free teaching subset in the teaching of selected topics such as carboxylic acids and hydrogen bonding. These are available on a university webpage.

Newcastle University has also recently started a collaborative project with Gary Battle and his colleagues at the Protein Data Bank in Europe (PDBe). The PDBe is part of the European Bioinformatics Institute, and is also based near Cambridge, UK. It is one of three worldwide online repositories of protein structures, principally obtained by x-ray crystallography. This new project aims to develop teaching and learning resources along similar lines to the CCDC project for the structure and function of proteins. Lucy Jakubecz, another 2013–2014 MChem project student, produced the initial resources which are also accessible on a university webpage.

Peter Hoare is the chemistry outreach officer in the school of chemistry at Newcastle University. Susan Henderson is a marketing and communications scientist at the Cambridge Crystallographic Data Centre