Catalysts for a green industry

The chemical industry has always exploited catalysts to do reactions as near to ambient temperature as is practical, thus keeping energy usage and costs down. Today industry faces additional pressure to be cleaner and greener, which will require the development of new catalysts.

The focus of catalyst research is now on finding catalysts that will enable industrial processes to be less polluting, operate with better atom economy, produce purer products and last longer. Although we may think of the catalyst as lasting for ever, this is never the case - all industrial catalysts have a finite lifetime, which makes the search for longer lasting catalysts high on industry's list of priorities. 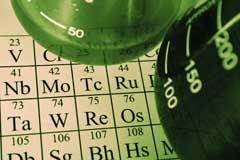 In general catalysts are described as substances capable of speeding up a chemical reaction, but there are some reactions that do not proceed at all unless a catalyst is present. These reactions may be thermodynamically feasible but their kinetics are so unfavourable that no reaction occurs.

For chemical reactions to take place the reactant molecules must collide with sufficient energy, the activation energy, to form the activated or transition state complex. Once formed, this transition state will either break down into reactants or into products. A catalyst provides an alternative reaction pathway with a lower activation energy than the uncatalysed reaction. The catalysed reaction can involve several intermediates and transition state complexes, quite different from the one-step mechanism for the reaction in the absence of a catalyst (see Fig 1). 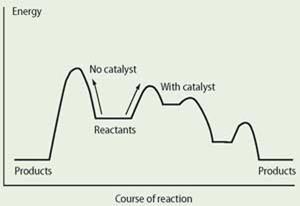 Many reactions are multi-step processes of which one will be the slow rate-controlling step, and it is this reaction that the catalyst must be active for, ie provide the alternative pathway. Additionally, many reactions are accompanied by the formation of side products, which may be useful but nevertheless need to be separated and therefore add to the costs of the process. Thus industrial chemists are always looking for catalysts that will provide maximum selectivity to ensure the highest purity of product. Two types of catalyst dominate in the chemical industry: heterogeneous and homogeneous catalysts.

Heterogeneous catalysts are solids that catalyse the reactions between liquid or gaseous reactants. (Note that the reaction itself usually occurs at the surface of the catalyst.) The catalytically active solid is typically coated onto a high surface area support to ensure the maximum exposure to the gas or liquid reaction mixture. These catalysts, usually transition metals and their compounds, are used in ca 85 per cent of industrial processes because they are easy to separate from the products at the end of the reaction. Examples include the Haber-Bosch process for the production of NH3, catalytic cracking, and the hydrogenation of vegetable oils.

A heterogeneous catalyst provides a lower energy path via a sequence that involves adsorption of reactant molecules upon an active site in the surface. The molecules become chemisorbed on the active site, their bonds are disrupted and rearrangements take place to form the activated complex; desorption then follows to release the product molecule(s) into the gas, or liquid, phase. The active site is once again vacant to repeat the process. Figure 2 shows adsorbed ethene and adsorbed hydrogen upon the active sites of a nickel catalyst. Following adsorption and reaction, the product ethane desorbs back into the gas phase, leaving the active site vacant for the next reactant molecules. This reaction is the basis of the hydrogenation of unsaturated vegetable oils in the manufacture of margarine. 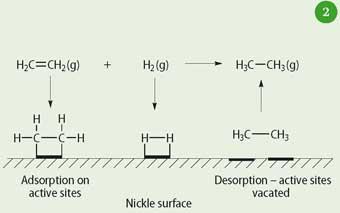 Clearly the adsorption is an important step and the precise structure of the surface is vital in providing the active site. Defects in the solid surface will create different types of site, which may have different or no catalytic properties. The active sites are characterised by having a critical geometry associated with the compounds that adsorb onto the catalyst surface. The geometry of an active site may also be determined by the structure of the underlying support. Thus changing the support can have a profound affect upon activity and may even redirect the course of a reaction.

An active site may be made more active by introducing other atoms or compounds. These are known as promoters, which alone are relatively inactive. For example, if a small amount of cobalt is added to the desulfurisation catalyst molybdenum disulfide there is a marked increase in activity. Poisons have the counter effect and build up on the catalyst surface during its life and often mark the end of the catalyst's life. A platinum hydrogenation catalyst, for example, is poisoned by sulfur-containing compounds.

The understanding of surface structure therefore plays a big role in the development of new catalysts and so it is here that much of the research effort is directed. Where only a small amount of a catalyst surface is productive there is clearly scope for improvement.

Several industrial processes use homogeneous catalysts, which are in the same phase (liquid or gas) as the reactants and products. Although more difficult to separate at the end of a reaction, homogeneous catalysts are often more active and selective than heterogeneous catalysts and tend to work at lower temperatures. This is because all the metal ions of a dissolved catalyst are potentially active sites for the reaction, whereas in a solid only those atoms at the surface are accessible to the reactant molecules. Examples include the acid catalysed esterification of carboxylic acids and alcohols and the gas-phase catalysed reaction of ozone destruction in the stratosphere in which chlorine free radicals, from CFCs, act as catalysts for the reaction.

Today, the industrial world relies upon an enormous number of chemical reactions and an even greater number of catalysts. A selection of important reactions reveals the scope of modern catalysis and demonstrates how crucial it will be for chemists to achieve their environmental objectives.

A sacrificial, or stoichiometric, catalyst is used once and discarded. The amount of waste produced is not insignificant since these catalysts are used in stoichiometric amounts. For example, the catalyst may typically be in a 1:1 mole ratio with the main reactant.

In the manufacture of anthraquinone for the dyestuffs industry, for example, aluminium chloride is the sacrificial catalyst in the initial step, the acylation of benzene, see equation (i). This is a type of Friedel-Crafts reaction 1  in which the spent catalyst is discarded along with waste from the process. Fresh catalyst is required for the next batch of reactants. The problem is that the aluminium chloride complexes strongly with the products, ie  Cl-, forming [AlCl4]- and cannot be economically recycled, resulting in large quantities of corrosive waste. 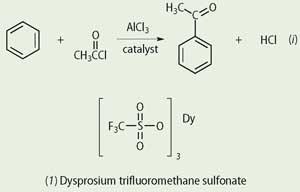 New catalysts, with better environmental credentials, are now being tried out. Compounds, such as the highly acidic dysprosium(III) triflate (trifluoromethane sulfonate, 1) offer the possibility of breaking away from the sacrificial catalyst by enabling the catalyst to be recycled.

Petroleum-derived fuels contain a small amount of sulfur. Unless removed this sulfur persists throughout the refining processes and ends up in the petrol or diesel. Pressure to reduce atmospheric sulfur has driven the development of catalytic desulfurisation. One of the problems was that much of the sulfur present was in compounds such as the thiophenes, which are stable and resistant to breakdown. 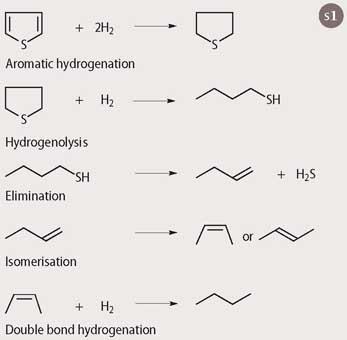 The catalyst molybdenum disulfide coated on an alumina support provided one solution. Cobalt is added as a promoter, suggesting that the active site is a molybdenum-cobalt sulfide arrangement. In the catalytic reaction (see Scheme 1), which is essentially a hydrogenation sequence, the adsorbed thiophene molecule is hydrogenated and its aromatic stability destroyed. This enables the C-S bond to break and release the sulfur as hydrogen sulfide. This is an interesting example of a catalyst performing different types of reactions: hydrogenation, elimination and isomerisation.

Current research in this area is directed at increasing catalyst life and improving activity.

In theory, the fuel cell is promising in terms of efficient electricity generation - chemical energy in the fuel is converted directly into electrical energy. Unlike other methods of generating electricity from fuels there is no intermediate thermal stage with attendant energy losses. In practice, however, there is a significant amount of energy consumed in the ancillary equipment, limiting its efficiency.

Like other electrochemical cells,2 the fuel cell is a redox system. The hydrogen fuel cell, for example, comprises an anode catalyst and cathode catalyst separated by a proton exchange membrane. The latter is a polymer that behaves as an electrolyte and allows protons to pass through. Overall the reaction is the oxidation of hydrogen to form water, which takes place in stages: at the anode, hydrogen is oxidised to give electrons and protons. The electrons pass to the external circuit and the protons pass through the proton exchange membrane to the cathode. At the cathode oxygen from the air reacts with the protons emerging from the membrane and simultaneously takes electrons arriving from the external circuit.

The electrode catalysts are platinum, which is expensive and so research is aimed at finding alternatives. Of the metals being tested an alloy of copper and platinum is showing promise.3 The platinum is alloyed with copper followed by de-alloying of the surface, leaving a modified platinum surface with improved activity. 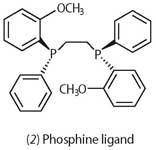 In many therapeutic drugs the active component is a single enantiomer. Generally, chemical reactions give enantiomeric mixtures as the product. Subsequent purification, for example, by fractional crystallisation, to isolate the active enantiomer is an extra process that adds to production costs.

By using chiral catalysts - or asymmetric catalysts - the single active enantiomer can be produced. William Knowles in the 1970s found that rhodium bonded to chiral phosphine ligands (2) could perform asymmetric catalytic hydrogenation. The method was soon developed for the commercial production of the anti-Parkinson drug, l-dopa (Scheme 2). In 2001 Knowles shared the Noble Prize in chemistry with Ryoji Noyori and K. Barry Sharpless for their research on asymmetric catalysis. Today, with the huge expansion of the pharmaceutical industry, there is demand for chiral compounds and other chiral catalysts are now being developed.4

Ethanoic acid is an important industrial chemical with an annual world demand of about six million tonnes. It is used in the synthesis of polyethylene terephthalate (PET), which is used for soft drinks bottles, in the production of photographic film and in the synthesis of synthetic fibres and fabrics, for example. There have been several methods used in its production, including the distillation of soured wine in which the ethanol was oxidised by bacteria to form ethanoic acid. This method, however, could not supply the needs of industry and so synthetic methods were developed. Today, the carbonylation of methanol, which uses a rhodium compound as a homogeneous catalyst, is the major production method. One of the problems with this reaction is that the selectivity is compromised by a side reaction in which propanoic acid is formed. In 1996 BP Chemicals introduced a catalyst - the Cativa catalyst (3) -  based upon iridium in place of rhodium.5

Scheme 3 shows the reaction sequence. This homogeneous catalyst, when combined with a small amount of ruthenium as a promoter, shows higher activity and suffers less from the propanoic acid side reaction, leading to lower costs and less waste.  Furthermore, the iridium catalyst is cheaper than the rhodium catalyst.

Catalysis has come a long way and has served industry well in enabling many reactions to be done which, otherwise, would have been uneconomic or even impossible. Today chemists are faced with new challenges as concerns for the environment and scarcity of resources motivates them to look for greener processes.

Tony Hargreaves is a science writer and part-time lecturer in applied chemistry at Calderdale College of Further Education, Halifax.