Chemistry unearths the secrets of the Terracotta Army

Simon Rees discovers how the Terracotta Warriors’ deadly arrows were made 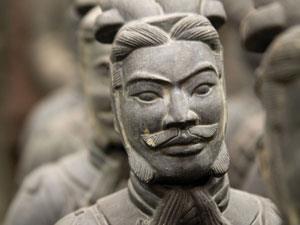 As the sun rose over the fields of Xi’an, Shaanxi Province on the 29 March 1974, a group of Chinese farmers set off for a day’s toil unaware of the astounding discovery they were about to make. There had been reports of fragments of terracotta figures in the past, but as the farmers dug a water well that morning they uncovered one the greatest archaeological sites in the world.

One can only imagine the intrigue and bemusement they must have felt when, after digging 5 m down into the loess sediment that had accumulated over the past 2000 years, they suddenly saw terracotta faces peering up at them. The first of an estimated 8000 Terracotta Warriors were emerging from the necropolis.

Fast forward 40 years and the home of the Terracotta Army is a world famous tourist attraction with more than a million visitors annually. Additionally some of the warriors and their horses have been on sell out world tours, attracting more fans than a One Direction concert.

Fit for a king

The Terracotta Army is one part of a much larger mausoleum built for Qin Shi Huang , the first Emperor of China (259–210 BC). Ascending to the throne at the age of 13, the emperor commissioned its construction and in less than 40 years a colossal funerary space was created that covers approximately 56 km2. It includes a funerary pyramid, various pits with life-sized servants, acrobats and musicians, water channels with delicate bronze birds, bronze carriages fitted with gold and silver implements and lavishly decorated with polychrome pigments. The Terracotta Warriors are distributed in three pits at the eastern end of the complex and are thought to be there to protect the emperor in his afterlife. Excavation of the largest of these pits has so far recovered over 1000 ceramic warriors in battle formation and eight chariots pulled by horses.

Thousands of workers are believed to have been involved in the construction of the mausoleum, with the workforce drawn from all over the empire. Forty years of painstaking recording and investigation has taught us much about this site, but in recent years archaeologists have turned to chemistry to help provide new evidence about how these workers constructed the Terracotta Army.

A joint team from the UK’s University College London’s institute of archaeology and the Emperor Qin Shi Huang’s mausoleum site museum have been working together on this project since 2006.1,2,3,4 Led by UCL’s Marcos Martinón-Torres, the Imperial Logistics Project brings together specialists in close typology, materials science and spatial analysis to obtain new insights into the warriors and their world. 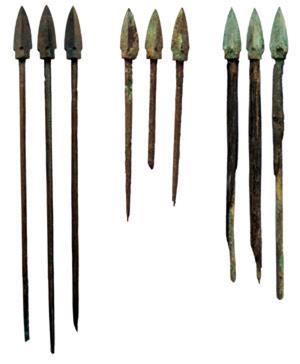 Some of the 40,000 bronze arrowheads recovered from the site of the Terracotta Army

The project’s latest results focus on investigating the logistics of technology and labour organisation behind the construction of the Terracotta Army’s bronze weaponry. Each of the individually crafted warriors was fully equipped with state-of-the-art bronze weapons. Over 40,000 arrowheads (most bundled in groups of 100 and placed into quivers) have been excavated as well as hundreds of crossbow triggers, swords, lances, spears and honour weapons. Detailed measurements and scrutiny of the crossbow triggers identified very subtly different subgroups in the collection. This suggests a range of different casting moulds and workshops were used to make these weapons.

However, all the arrowheads that were examined were visually very similar and so the researchers turned to chemical analysis to investigate the elemental composition of the artefacts to obtain an insight into how these weapons were made. The team used portable x-ray fluorescence spectrometry (pXRF)  to perform chemical analyses on a large number of arrows quickly, inexpensively, and without damaging them or needing to remove them from the site. All the major elements present in pre-modern copper alloys have relatively high atomic numbers and can, in principle, be accurately quantified by pXRF even if the analyses are not carried out in a vacuum.

It was uncertain, however, whether any meaningful results would be obtained due to the mild corrosion and contamination by soil deposits on the surface of the arrowheads that had occurred since they were manufactured. This sampling uncertainty means that the results could not be considered as fully representative of the overall composition. There was, however, no alternative as it would be unacceptable to damage the artefacts while attempting to reveal the original metal underneath.

Despite this limitation, when the results were analysed some interesting observations were made. When the lead and tin contents of the arrowheads were plotted as a scatter diagram, the arrowheads within a single bundle were found to form a relatively tight cluster that was marginally different to the arrowheads from other bundles. This led the research team to suggest that the 100 arrowheads in each bundle all came from the same metal batch, probably cast from a single crucible.

The same pattern was observed for the tangs (the part behind the arrow that extends into the shaft), suggesting that the 100 tangs in each bundle were also made from a single batch of metal. The presence or absence of metal impurities such as antimony and arsenic was also generally consistent within bundles, adding more support to the researchers’ conclusions.

X-ray fluorescence spectrometry works by bombarding the material of interest with short wavelength x-rays, resulting in ionisation of the component atoms. The x-rays are sufficiently energetic to expel electrons from the inner orbitals of an atom and the electronic structure becomes unstable. Electrons ‘fall’ into the lower energy levels and energy is released as x-ray fluorescence. The energy of this x-ray is equal to the difference between the orbitals involved and is therefore characteristic of the atoms present, while its intensity is relative to the abundance of that particular element in the sample. 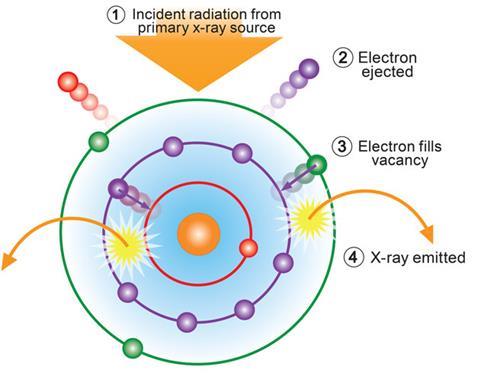 Evidence of the arrows’ compositions has led the researchers to state that a cellular production system rather than a continuous production and assembly line must have been used to make them. If the arrows had been constructed by an assembly line comprised of highly specialised teams, each producing one part, then it would have been much more likely that different metal batches would be mixed up among various bundles. In a cellular production model – with smaller but more versatile production teams functioning in parallel, each with all the skills and resources they need to produce complete, multi-component items such as arrow bundles – muddling up of batches would be far easier to avoid. Most likely, these versatile cells produced different finished weapons as and when needed, adapting their output to the progress of the construction of the Terracotta Army.

The modern parallel to this form of production can be seen in the car industry. The moving assembly line was made famous by Henry Ford and it was used to ensure low production costs, high productivity and consistent standards. On the other hand, Toyota has utilised cellular production since the 1970s. Toyota cars are manufactured by smaller production units when demand is in place, reducing storage costs and overstocking (a production strategy known as ‘just in time’). In terms of its basic principle and potential advantages, the organisation of labour for the production of the Terracotta Army is thought to be closer to Toyotism than Fordism.

A view to kill 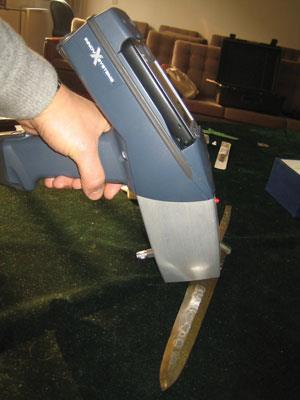 Comparison of the chemical composition of the arrowheads and the tangs also revealed that, with very few exceptions, the heads have a higher tin content than the tangs. High tin bronzes are very hard and can be polished to a sharp finish, increasing the penetration power of the arrow but at the expense of higher brittleness. The tangs, on the other hand, were made of a lower tin bronze and are tougher and less likely to fracture when inserted into the bamboo shaft. This may also allow for a certain degree of flexibility for its oscillation during the arrow’s flight. The implication is, therefore, that the weapon makers consciously optimised the composition of the alloys for the different functions of the various arrow parts.

Once the arrowhead  had been cast it would then have been polished and finished. To learn more about how this was done, the researchers used poly(vinyl siloxane) (the material used for denture impressions) to obtain precise moulds of the weapons’ surface. Under the scanning electron microscope (SEM), these rubber impressions displayed densely packed, extremely fine and perfectly parallel, grinding and polishing marks. Such features are diagnostic of the use of rotary mechanical devices for the painstaking polishing that ensured the sheen and sharpness of the weapons – the earliest evidence of the use of lathes for polishing on an industrial scale.

Another fascinating aspect to these latest chemical analysis results is that this vast army’s weaponry was manufactured to be fully capable of lethal use. It was not simply a funerary offering.

Marcos says ‘We always talk about chemistry as something helping us shape the future. Here we show that the use of chemistry to understand the past can be very rewarding too. A combination of chemistry, geography and computing, together with more traditional archaeological methods, is allowing a fascinating insight into the logistical organisation of the first Chinese empire. Hopefully our work will appeal to students of both humanities and sciences, and it will persuade them that speaking of interdisciplinary research is not redundant today, as there is simply no other way of doing research.’

It remains to be seen how chemical techniques can be used in the years to come to reveal yet more about the Terracotta Army  and the thousands of workers that constructed it over 2000 years ago. 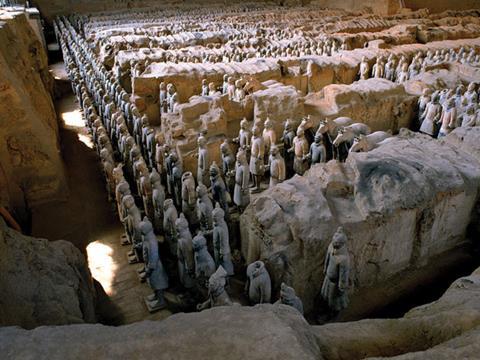