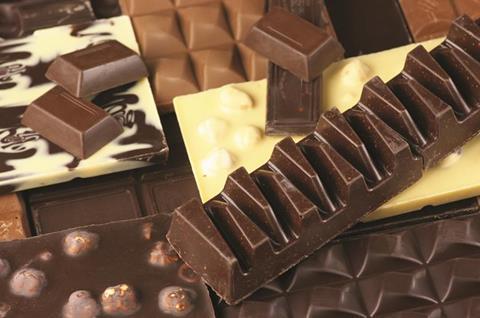 Imagine yourself holding a bar of chocolate. As you tear off the wrapper, you are greeted by the glossy sheen of the chocolate. You break off a square with a satisfying snap and place it on your tongue. The flavour intensifies as the chocolate starts to melt in the warmth of your mouth. Delicious compounds are unlocked while the creamy mass glides across your taste buds. The flavour of chocolate is sensational but the consistency – how it feels to eat – is just as important. Not only did the cocoa bean give us those wonderful flavours, it also gave us another substance responsible for that trademark consistency – cocoa butter.

The tantalising texture of chocolate is no accident. Even after the ingredients have been combined in the right amounts, the mixture still has to be tempered. This is the process of manipulating a material’s properties by changing its temperature. If the chocolate is not tempered, it will not have the same glossy appearance, satisfying snap and melt-in-the-mouth, creamy consistency. For example, have you ever eaten a chocolate bar that has melted in your pocket and then resolidified before you opened the wrapper? It looks dull or patchy, and feels grainy or greasy on your tongue. The only way to restore the desirable properties is to temper the chocolate again, to crystallise the cocoa butter molecules in a particular way.

What pops into your head when you think of a crystal? Chances are, you are thinking of the cubic crystals of table sugar or table salt, or blue, parallelogram-shaped crystals of hydrated copper sulfate. In fact, crystals come in all kinds of shapes, sizes and colours. Some are transparent, like quartz; others are opaque or shiny like iron pyrite (‘fool’s gold’).

But the thing that makes something a crystal is the way the atoms, ions or molecules are arranged. In a crystal, the structural pattern is fixed and repeats over and over again, in all three dimensions. The smallest box you can fit this fixed, repeating pattern into is called the unit cell. Some unit cells are cubic, others are cuboids or rhombic prisms, and the overall shape of the crystal reflects the shape and symmetry of the unit cell. A crystal is a huge stack of unit cells, all the same way up, side by side and on top of each other, repeating over and over again, right from one end of the crystal to the other.

But how does this process of crystallisation relate to the melt-in-the-mouth consistency of chocolate? The first thing to note is the difference between a crystal and a material that contains crystals. Chocolate can form in various different shapes, Easter eggs being a common example, and many of them do not look like the crystals we just described. This is because a piece of chocolate is not a single crystal. It is a mixture of several substances, some of which form crystals. Each piece of chocolate contains millions of microscopic crystals of cocoa butter that are too small to see, mixed in with the other ingredients that are not crystalline.

Explore the structure and melting point of chocolate with this experiment, which includes the all-important taste test!

Explore the structure and melting point of chocolate with this experiment, which includes the all-important taste test! http://bit.ly/13171U2

To understand how cocoa butter crystallises, it is important to know what kind of substance it is. Cocoa butter is a fat, which means it is formed from three fatty acid molecules attached to a glycerol molecule.

The fat molecules resemble the head of a fork with three prongs. If we rotate one of the fatty acid chains so that it sticks out the other side of the glycerol backbone, they take on a new shape rather like a chair. This is important because we need our cocoa butter molecules in the chair shape to get the best crystals.

Not only is their shape important, but also the way they are laid out. Remember that a crystalline structure is one in which a pattern of atoms or molecules – the unit cell – is repeated over and over throughout the structure. The snag with cocoa butter is that lots of different arrangements are possible. Another problem is that no one is very sure precisely what those arrangements really look like at the molecular level! However, researchers and chocolate-makers agree that there are six types, which are given Roman numerals. Types I to IV produce inferior chocolate, while types V and VI give the creamy texture and other desirable qualities.

While the structure of the type V and VI crystals is not completely understood, there is a working model. Returning to the idea of the ‘chair shaped’ fat molecules, we think the unit cell for the type V crystal is with pairs of chairs back to back and head to toe. These pairs can then stack together to form layers, and several layers stack on top of each other to make a crystal. But the fat molecules could line up in the ‘fork’ position, or the chairs could be back to back but not head to toe. These are examples of what the structure of the inferior type I to type IV crystals might look like. 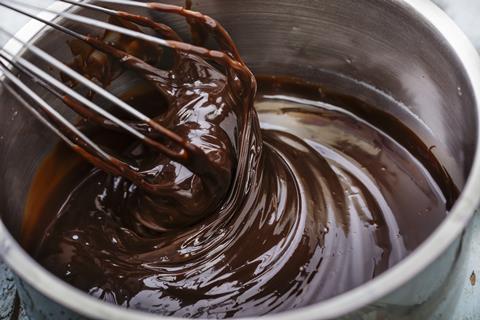 Now that we have identified the type of crystal we want, we need to consider how to grow it. For this, two things are necessary. The molecules forming the crystal must be free to move and they need a lot of time to get themselves lined up. This is exactly what happens when chocolate is tempered.

In fact, the process is slightly more complicated than that. First of all, the chocolate is heated to 50°C so that it completely melts. Next, the mixture is cooled. As it starts to solidify, the cocoa butter begins to crystallise. But crystals of all six different types form. At this stage, the crystals are very small and are called seeds. In crystallography, a seed is a small crystal and the starting point for a larger crystal to grow. The problem after this first stage of tempering chocolate is that the mixture contains seeds for all the different types of cocoa butter crystals. This means that the other cocoa butter molecules have a choice of seeds to crystallise with, and whichever type of crystal a seed is, it will stay that type. In other words, if a crystal forms around a type II seed, then it will grow into a type II crystal, and that is not the kind of crystal that makes for good chocolate.

Our understanding of chocolate is still incomplete. But the more we learn, the more advantages food chemistry gives us. Up to now, the main point of research has been to improve the efficiency of the chocolate-making process. For example, adding emulsifiers such as lecithin has helped to reduce a phenomenon called ‘blooming’. This is when cocoa butter molecules get pushed out of the middle of the chocolate and crystallise on the surface, producing unsightly white patches.

But a far more exciting development in the world of chocolate chemistry has just been announced by researchers at the University of Warwick, UK. Stefan Bon and his team have found a way to remove up to half of the fat content of chocolate without affecting the flavour or texture. This incredible breakthrough was achieved by adding fruit juice or tiny blobs of jelly to the chocolate mixture. After the ingredients have been mixed, there is a very specific preparation process that has to be applied, just as normal chocolate has to be tempered. But the end product tastes just as delicious.

These breakthroughs show how rewarding a career in chocolate chemistry could be. The huge profits of the food industry will drive research for a long time to come. But as the obesity epidemic continues, there is more than money at stake. If you were the scientist to develop a delicious chocolate with no fat and no sugar, history would remember you as a saint – and a wealthy one at that.

The chocolate river and waterfall in the 2005 film Charlie and the Chocolate Factory weren’t computer generated. Find out how the film company produced 1.25 million litres of liquid ‘chocolate’ with this article from Chemistry World.

The chocolate river and waterfall in the 2005 film Charlie and the Chocolate Factory weren’t computer generated. Find out how the film company produced 1.25 million litres of liquid ‘chocolate’ with this article from Chemistry World: http://rsc.li/15ElhAH.