Nuclear power is a low-carbon technology, but it does come with a catch: it produces waste that emits harmful radiation for many thousands, even millions of years. UK chemists, however, are working to produce materials and technology to deal with this problem. 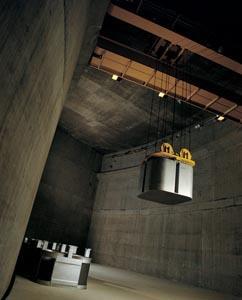 Out of sight, out of mind?

The UK looks set to increase its reliance on nuclear power. Scientists and politicians agree that this technology will be a necessary part of the energy mix to meet the pledge to cut 60 per cent of the country's carbon emissions by 2050. The UK currently has 24 nuclear reactors, many of which began operating in the 1950s. They produce one-fifth of our electricity but are now nearing the end of their lifetime and need to be decommissioned, which will produce yet more waste. Even if no new reactors are built there will be an estimated 478,000 m3 of radioactive waste by 2120: enough to fill London's Royal Albert Hall five times over. What is this waste and how is it being dealt with?

There are three main categories of radioactive waste. The most dangerous is 'high-level waste' (HLW) - the hot concentrated nitric acid solution that contains the dissolved spent fuel rods from the nuclear process (see Box 1) and is so radioactive that it generates large amounts of heat.

Around half of the elements of the Periodic Table, from zinc to the late lanthanides, are generated during the fission reaction. Many radioactive elements are present, some of which have a 'half-life' (the time it takes a substance to lose one half of its radioactivity) of hundreds of thousands of years. They will therefore remain radioactive for millions of years. Storage of HLW must therefore be designed to withstand temperatures of several hundred degrees Celsius. Although HLW makes up less than 2 per cent of the nuclear waste stockpile, it contains over 90 per cent of the total radioactivity.

In 2003 the Government set up a task force, the Committee on Radioactive Waste Management (CoRWM), to investigate the best option for disposing of this hazardous material. The committee considered everything from dumping it in the sea to blasting it into space on rocket ships. But in 2006 the committee gave the Government its answer: bury the waste deep underground. While stored between 300 and 1000 m below the surface of the Earth, the radioactive elements will decay over many thousands of years forming other, common, less harmful elements.

Living 500 m above a tonne of radioactive waste sounds scary, and the technology for storing the waste must prevent any of the radioactive elements from leaking out into, for example, the water supply. The materials must also prevent radiation damaging the environment. 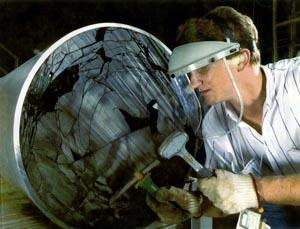 Source: US Department of Energy

The nitric acid solution containing mainly the other fission products can be cooled and stored. The nitric acid solution of HLW is currently dealt with by turning it into a glass in a process called vitrification. First water and nitrate is removed by heating at 400-600°C, then lithium nitrate, sugar and glass granules are added. At ca 1060°C the molten glass mixture dissolves the fission products. The solution is poured into steel canisters and sealed inside, where it cools and solidifies, trapping the harmful elements inside a tough matrix. The random arrangement of atoms in glass makes it well suited to trap the waste. Up to about 25 per cent of the weight of the final glass is waste.

Dr Neil Hyatt of the University of Sheffield develops and tests materials for radioactive waste storage. He explains that matching the material to the requirements and risk of the waste is a case of using the right tools for the job: 'You wouldn't use a hammer to undo a nut in your car engine would you?', he asks. Cement, for example, is suitable for storing the large volumes of ILW and LLW. It is not as durable to heat and radiation but is cheap to manufacture. 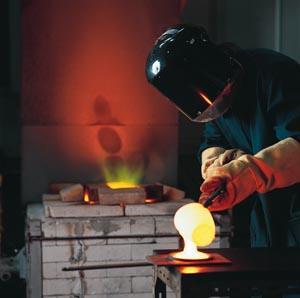 Hyatt's goal is to develop a 'tool box' of materials suitable for different purposes. His team evaluates materials against various criteria, including chemical durability and resistance to radiation damage, using experiments and mathematical models. For example, to test for durability his team measures the effect of different conditions such as pH and temperature on the species that leach out of a material in aqueous solution.

The team also uses naturally occurring minerals as a guide to design synthetic materials that will perform as well, or better, than Nature. 'A mineral that's been around for millions of years and retains radioactive elements is a good bet', said Hyatt. His group took the natural ceramic mineral zirconolite (CaZrTi2O7), for example, and created a version including cerium, gadolinium and hafnium. Ce is very similar in chemistry and atomic size to plutonium, and therefore Pu atoms could replace Ce atoms in the structure. Gd and Hf are included because they absorb neutrons without undergoing fission, reducing any radiation damage the Pu may cause. Materials like this are also extremely good at preventing the waste leaching into the environment.

Some of the problems associated with disposal could be avoided by reducing the amount of harmful substances in the radioactive waste.

Professor Francis Livens of the Centre for Radiochemistry Research at the University of Manchester is investigating ways of doing this by a process of 'transmutation'. This is the process by which a long-lived radioisotope is converted into a short-lived one.

Technetium-99 (Tc-99), for example, is a common fission product with a half-life of 210,000 years. In HLW it may have to be stored underground for over two million years before it has decayed fully. In transmutation, Tc-99 is bombarded with neutrons and is converted to Tc-100. This new isotope decays to harmless ruthenium and has a half-life of only 16 s.

This is a hugely attractive concept but it's not a simple solution. Livens describes the HLW mixture as 'gunk' containing many other elements besides technetium. These would also be hit by the neutrons and form other products in an unpredictable way and cause other problems. 'Separating these elements from the waste', according to Livens, 'requires sophisticated chemistry on some unpleasant stuff'. 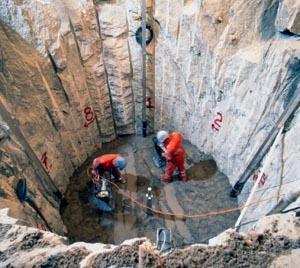 This is one of the goals of Livens' colleagues at Manchester. In one of a select few laboratories worldwide equipped to work with radionuclides such as technetium-99, neptunium-237 and plutonium-242, they design molecules that can encapsulate specific radioactive species, forming a complex that can be extracted from the waste mixture using a solvent. For example, the oxygen atoms in bis(diphenylphosphino)methane dioxide (DPPMO2) can complex uranium and technetium atoms to form the stable, soluble complex [UO2 (TcO4)(DPPMO2)2]+.

There are still significant technological problems to solve before large radioactive waste repositories can be built. We need a better understanding of, for example, how the durability of some materials is affected by the damage caused to its structure from radiation. The efforts of UK chemists will, however, ensure the Government has confidence in its plans to bury our toxic legacy.

Nuclear reactors use rods of solid fuel which are stored in metal tubes. The fuel rods are made of two isotopes of uranium: U-235 and U-238. The source of the power is the fission reaction. To initiate fission, the fuel is bombarded with neutrons, causing the unstable U-235 nucleus to split. This creates two or more lighter atoms (fission products) and releases more neutrons and a great amount of heat. The neutrons released by fission cause other atoms to split in a chain reaction. The heat is used to produce steam which powers a turbine to generate electricity.

An example of a fission reaction:

Once a fuel rod has been used it has to be treated before it is safe for storage and disposal. First it gets chopped up into small pieces and dissolved in hot nitric acid. The solid casing is separated from the dissolved fuel and fission products, then tributyl phosphate (TBP) and kerosene are added. The uranium and plutonium atoms in the solution bond to the TBP to form a complex that dissolves in the kerosene, allowing these valuable elements to be recovered and used again.