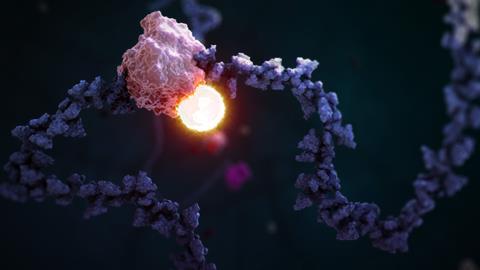 If you want to develop new and better cancer drugs, go to the library, says Andy Extance

Chemists are hunting down a killer responsible for the death of someone in the UK every four minutes. That killer is cancer, which the World Health Organization estimates was the first or second leading cause of death for people under 70 in 112 of 183 countries in 2019. Cancer is such a big threat that many chemists are inventing new drugs to treat it. They hope these will either work better than older drugs or fight cancers that we don’t already have good treatments for.

For decades, doctors have used three main types of treatment to keep cancer at bay. You could call them slash, burn and poison. Slash refers to surgery, which simply cuts out tumours. Burn means radiotherapy and poison means chemotherapy; both kill cancer by damaging the DNA molecules that are its genetic material. Radiotherapy uses radiation beams focused on the cancer. In chemotherapy, drugs like cisplatin damage DNA – and DNA in all cells in a patient’s body, not just cancerous ones. According to statistics from Cancer Research UK (CRUK), 45% of cancer patients undergo surgery, 27% get radiotherapy and 28% get chemotherapy.

Several post-16 exam specifications require learners to know why cisplatin prevents DNA replication. Learners should also be able to explain why such drugs can have adverse effects. The mechanisms of anti-cancer drugs brings together learning about transition metals, DNA and ethical considerations in science and medicine. This is an opportunity for cross-curricular debate within the classroom, with sensitivity to the real impact that the topic may have on everyone’s lives.

Cisplatin’s chemical structure primes it to react with DNA. Nitrogen atoms in DNA can displace two chlorine atoms attached to the platinum atom at cisplatin’s centre. That stops cells repairing or copying that DNA and ‘causes them to die’, explains Helen Sheldrake, a lecturer at the University of Bradford who is researching new cancer drugs. ‘Because the drugs target DNA, they affect all cells that have it. They have most effect on cells which are dividing rapidly like cancer. But other types of cell normally divide rapidly, including hair follicles, the bone marrow that produces blood cells, and stomach lining.’ Cisplatin also causes these cells to die. That leads to people losing their hair, getting more infections and feeling sick, respectively.

Chemotherapy works well for some cancers, like testicular cancer and some forms of leukaemia. ‘In many other cancers, it either doesn’t work well or can work for a while then stop as cancer cells develop ways to quickly expel the drug from the cell,’ explains Helen. ‘Developing new drugs will improve the chances of survival for patients who have difficult-to-treat cancers and make treatment more tolerable.’

Caroline Springer is director of the Drug Discovery Unit at Cancer Research UK’s Manchester Institute (CRUK MI), part of the University of Manchester. She adds that chemotherapy with drugs like cisplatin doesn’t usually cure cancer on its own. Surgery and radiotherapy tend to be used together with chemotherapy. ‘Chemotherapy is often the last resort,’ Caroline says. Even when cancer cells initially respond to chemotherapy, they evolve ways to resist the drug, often by mutating. ‘The cells within the tumour change in response to drugs,’ Caroline stresses. Today, to deal with cancer becoming drug resistant, doctors can move through a sequence from a first to second line treatment and beyond. Adding new drugs to this sequence has lengthened cancer patients’ lives. 30 years ago, about a quarter of people survived 10 years after their cancer diagnosis, according to CRUK statistics. Today it’s about half. 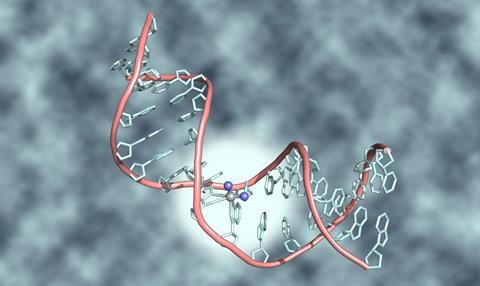 Chemotherapy drugs like cisplatin, seen here bending the double helix, damage DNA in all cells in our body, not just cancerous ones. Medicinal chemists are working on more targeted drugs

That’s in part because, starting in the 1970s, chemists helped develop a new type of cancer treatment. Targeted therapies seek to build on an idea called the ‘magic bullet’ that originated early in the 20th century. The idea was that scientists could develop drugs that don’t harm a patient, and only affect the cause of a disease. Targeted cancer drugs aim at genetic features or biological processes ‘very specific to cancer cells’, says Helen. ‘They can stop a process that allows a cancer cell to grow rapidly or spread in the body with very little effect on normal cells.’ As such, Helen’s research focuses on a target involved in the process of metastasis by which cancer spreads.

Discovering targeted therapies starts with finding their target, Helen explains. This involves finding a mutation, or a protein that cancers make a lot of, but normal cells don’t. ‘Part of the driving force is knowing that there are no effective treatments for some cancers,’ she says. ‘Developing a new drug will have a huge impact on the lives of patients and their families.’

Assess your learners’ abilities to apply their knowledge of transition metals in the context of anti-cancer drugs with these exam-style questions. The resource requires learners to be able to draw the structure of cisplatin and show the mechanism of a ligand substitution reaction with DNA.

Assess your learner’s abilities to apply their knowledge of transition metals in the context of anti-cancer drugs with these exam-style questions.

Yet the reality of cancer is quite different to a magic bullet. That idea is best suited to diseases caused by bacteria or viruses, which come into our bodies from outside. Cancer starts inside our bodies when a gene in one of our cells mutates. Those mutations can be caused by things we do in our lives, like smoking or getting sunburned. ‘Or we might inherit defective genes from our parents,’ Caroline says. Cancer cells are therefore very similar to healthy cells, she stresses. ‘That’s a major issue when we select our targets.’

‘We screened about a quarter of a million compounds, which might sound a lot but it’s actually not that many’

Often the mutation is in a gene that tells cells to make a protein called a kinase. That’s one of the targets the CRUK team is trying to invent drugs for, so they must make sure they don’t accidentally hit kinases in healthy cells. Another target for CRUK MI is lysyl oxidase, which helps tumours to grow and spread by metastasis. ‘Most drugs are aimed at the primary tumour,’ says Caroline. ‘90% of patients that die of cancer die of their metastasis rather than their primary tumour, so we think it’s important to try to address the metastasis as well.’

The next step is finding a way to stop the target working. This is usually done by physically blocking the target from interacting with other molecules. Scientists call this binding. ‘Much of the design process is done using computer modelling,’ says Helen. ‘We take the structure of a protein and identify parts of it where a drug could bind, called a binding site. Molecular docking allows us to test small molecules virtually to see whether they will fit the binding site.’

Testing whether the molecules or antibodies bind and stop cancer cells is called screening. That’s where STORM Therapeutics in Cambridge, UK, started work on developing the molecule they hope will be a new cancer drug, called STC-15. ‘We screened about a quarter of a million compounds, which might sound a lot but it’s actually not that many,’ says David Hardick, STORM’s director of medicinal chemistry. ‘Typically, you’ll do screens of up to a million compounds.’ 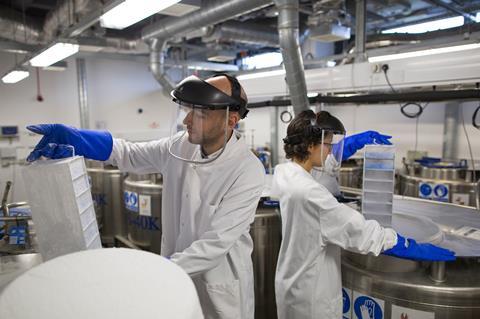 Go to the library

To do this, chemists go to the library, says Caroline. But rather than a library of books, this is a library of compounds that might work as drugs. Typically, her team will add a little of each compound to target the cancer protein in solution across many, many plastic tubes. Each tube will also contain a way to tell if the drug binds to the target, perhaps through a colour change. Caroline says that maybe 3% of the entire library might produce a colour change. Her team then looks in each of these tubes to ‘assess whether that effect is real’.

STORM’s target is a protein called METTL3. It tags RNA molecules carrying information from a cell’s genes about which proteins to make. The proteins that get made help acute myeloid leukaemia (AML) to thrive. STORM targets AML because it is one of the cancers with the fewest treatment options. Leukaemia is a type of blood cancer, so there’s no tumour to cut out or burn away with radiotherapy. Chemotherapy has long been the only option.

By screening, David and his colleagues found a molecule that only loosely binds to METTL3. Over two years the scientists modified the molecule’s structure to fit many needs. They wanted it to bind more tightly to METTL3. But they also want a molecule that dissolves better in water, so it gets into our blood more easily. They also wanted to balance how quickly our body breaks down the molecule. It needs to be stable long enough to affect the cancer, but not long enough to build up to dangerous levels. ‘Gradually, you get the molecule you’re really interested in,’ says David.

STORM Therapeutics hopes to start giving the final molecule, STC-15, to human patients in early 2022. ‘You’re targeting specific mechanisms being identified for a particular cancer, which we hope is less toxic to patients,’ David says. Yet, despite the magic bullet idea, neither STC-15 nor any other targeted therapy is perfectly free of side-effects. ‘You have this fine line between therapy and toxicity,’ says David. ‘Cancer is one of these things where we do push the limit. Older cancer drugs tend to be a bit more of a blunderbuss, more heavy-handed.’ So, until it reaches patients, STORM researchers will study how toxic STC-15 might be. STORM’s chemists are also busy making a few kilograms of the drug, enough to give people for testing.

Targeting is getting ever more tightly focused, adds David. ‘When we take AML there are many subtypes of that,’ he explains. ‘One size won’t fit all with cancer. It’s not just one disease. There’s a huge spectrum of ways of treating it.’

Discovering drugs for cancer or any other disease involves scientists from many areas, David stresses. There are many areas of chemistry, physics and biology involved and even lawyers to help understand which drugs companies have already patented. However, David highlights that chemistry’s involvement has a unique feature. ‘There’s huge creativity in the chemistry behind being able to optimise a drug,’ he says.

Caroline echoes this. ‘For medicinal chemists, it’s a really interesting way of working,’ she says. ‘Medicinal chemists are really excited to get those biological results and make better molecules. It’s really fascinating.’