Forensic science and the case of Dr Mario Jascalevich

Forensic science is depicted in several television programmes as a near-perfect means of solving major crimes. In real life, forensics may sometimes point to guilt, but in the end be insufficient to prove it. This is the account of one such case

Murder by poisoning is now rare compared to a century or more ago. Firstly, the classic poisons are much less readily available. You cannot pop into the local chemists and buy the deadly poisonous alkaloid, strychnine, under the pretence that you want it for destroying garden moles. Arsenic compounds are no longer ingredients in fly-papers. Secondly, in suspicious deaths, analytical chemistry is far more effective at identifying unexpected substances in bodily remains, so laying the foundation for subsequent detective work.

The medical profession and murder by poison have a connectivity, even in recent times. Most notorious is the case of Dr Harold Shipman, who may have killed up to 230 of his patients by injections of morphine and heroin. A century earlier, the story of Dr Hawley Harvey Crippen who poisoned his wife using hyoscamine, still resonates today. This connection between doctors and poisoning arises because they:

This is the story of Dr Mario Jascalevich, who probably killed as many as 25 hospital patients, and the battle between two sets of forensic experts, the outcome of which failed to convince the jury of the doctor's guilt. Jascalevich was the chief surgeon at Riverdell Hospital, New Jersey, US. In 1965-6 patients began to die unexpectedly.

The first was a man of 73 admitted for a hernia repair. Jascalevich said he was not fit for surgery due to mild congestive heart failure and he put him on an intravenous drip. The patient died a few minutes later.

A few months later a four year old girl had her appendix removed by another surgeon, Dr Stanley Harris. She was progressing well and told a nurse that she wanted to go home. A few minutes later she was dead.

A succession of suspicious fatalities followed. Dr Harris and his colleague, Dr Lans, reviewed the cases and noted several similarities:

Using his own initiative, Dr Harris decided to open Jascalevich's locker. He found several vials (both sealed and half used) of curare, a poison and syringes of curare. The directors of the hospital were alerted. A warrant was obtained to conduct a formal search of the locker. 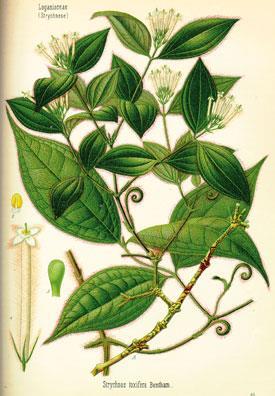 The strychnos toxifera plant, from which curare can be extracted

Curare (pronounced curaré) was used by South American Indians as arrow poison. It was derived from local plants, which they used to kill prey for food.5  In sufficient quantity, curare paralyses muscles so that the prey cannot escape, and dies because it stops breathing. It was first brought to Europe by the explorer, Charles-Marie de la Condamine, and extensively investigated by physiologists in the 19th century. But it was not until the mid-20th century that it was realised that as it caused paralysis, if it were to be safely used in medical applications, it had to be combined with artificial ventilation. 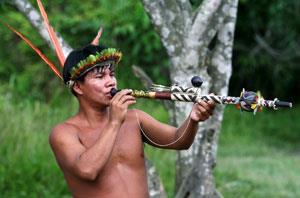 The nerve impulse from the brain along the nerve is electrical, but when it reaches the nerve ending, it becomes chemical. Acetyl choline is released which passes across the junction on to receptors on the muscle, and causes it to contract. Curare sits on these receptors, so the acetyl choline cannot reach them. Provided that the subject is kept alive by artificial ventilation, eventually the curare dissipates, and the subject recovers voluntary muscle control.

Curare itself is no longer used in anaesthesia as better synthetic analogues are now available. These drugs have revolutionised anaesthesia and surgery. An anaesthetised patient can now be kept lightly anaesthetised, but completely paralysed, so that surgeons can gain access to areas which were impossible previously. At the end of surgery these drugs can be reversed and recovery from anaesthesia is more rapid, as less anaesthetic agent needs to be used.

When challenged, Jascalevich claimed that he'd been using the drug as an anaesthetic adjunct for experimental work in connection with liver biopsies on dogs. Afterwards he went to his research laboratories and performed a dog experiment.

Later his locker was found to be contaminated by dog blood and hairs. There was no way of knowing if the contamination occurred before or after the confrontation between Jascalevich and the hospital authorities.

A check revealed that some of his curare had been legitimately purchased but some could have been stolen from the hospital pharmacy, and planted by someone else in his locker in an attempt to frame him. Because of this, and because the prosecution was told that curare could not be found in human tissue, the case was dropped.

In 1975 the New York Times received a tip-off that the events might be worth re-examination and reporter Myron Farber began investigating. He interviewed relatives of the deceased and hospital staff. He obtained case notes and other original files, publishing three long articles on his findings in the NY Times.

"It is my professional opinion that the majority of the cases reviewed are not explainable on the basis of natural causes and are consistent with having been caused by a respiratory depressant. It is my opinion that recent technological advances now permit the detection of very minute amounts of curare removed from dead bodies."1

Relatives of five of the alleged patient-victims agreed to exhumations. Tissue samples were taken and divided among toxicology laboratories. Curare was found, apparently, in several of the bodies and Jascalevich was arraigned for the murder of these patients.

The 34 week trial, conducted before 18 jurors, started on 28 February 1978. The scientific issues that were being deliberated were:

If the forensic analysis indicated the presence of curare in the patients' tissues, was Dr Jascalevich the person who injected them with it? His defence challenged the chemistry underpinning the analyses, and raised uncertainties over this last point.

"Currently, the reported analytical methods (relied upon by the prosecution), which include ultraviolet absorption spectroscopy, thin layer chromatography, high pressure liquid chromatography and radio-immune assay, alone or in conjunction, lack such a degree of specificity with any degree of scientific certainty required to support the opinion that they identified the isolated material as d-tubocurarine (ie curare) in the embalmed decomposed and skeletonizing tissues that have been in the ground for ten years under varying climactic conditions." 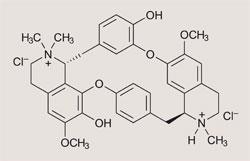 The structure of curare (d-tubocurarine chloride)

Experienced users of thin layer chromatography will know how difficult it is to be certain that one ascending spot, or more likely, smudge, is moving at the same rate as the reference one. Even if it is, does the coincidence imply that the two substances, analyte and reference, are identical?

Missing from Stolman's list was mass spectrometry. This technique was used by both the prosecution and defence.

A prosecution witness, David Beggs from the Hewlett Packard Corporation, said he had found curare in the tissues from one of the patients (Nancy Savino) and that sample from two further exhumations contained  possible traces of curare. However, under cross-examination he stated that mass spectrometry is not an absolute test for curare but 'just probably indicated that it was there'.

Today we would combine the spectrometry with capillary gas chromatography. If reference curare matched the analyte both with respect to GC retention time  and with a MS fingerprint, then the result would not be disputable.

A defence witness, Frederick Rieders, former chief toxicologist in Philadelphia, said the only procedure that he considered as providing unequivocal evidence for the presence of curare was, indeed, mass spectrometry. A reliance should be placed on the whole 'fingerprint' spectrum, rather than the more sensitive selected ion monitoring method.

His technique was to:

Having established a method for showing up traces of curare, Rieders tested the stability of curare against embalming fluids and the liquids produced by bodies whilst they decompose. It was detectable for a few days, but after this period he could not find any traces of it, or plausible decomposition products that indicated its original presence.

In reviewing his results, Lawrence Hall and Roland Hirsch said:

"These liquids altered curare chemically to the point where it was no longer recognisable as such. He concluded that the rapid rate of decomposition meant that to detect curare in the specimens of 1976 would have required huge, medically impossible amounts to have been present in 1966."

However, Rieders had another surprise in store for the jury. His methodology confirmed one of the prosecution's assertions: he too found curare in the liver from Nancy Savino. However, this observation was accompanied by some concerns.

Firstly, in the light of his work on the instability of curare towards embalming and decomposing fluids, it should not have shown up at all.

Secondly, he found that the curare, despite having been in a most unpromising environment for a decade, was highly and inexplicably pure.

Thirdly, he found curare only in the child's liver, not in her muscle tissue. The drug, administered by intravenous injection, should have perfused the whole body (with the possible exception of the brain) and a positive liver result should have been matched by a positive tissue result.

In the reports available to us, we do not know what interpretations the defence made from these findings. Possibly the least suspicious one would be that some form of accidental contamination occurred whilst handing the child's liver.

In October 1978, the jury retired to consider its verdict. It had to consider a mass of circumstantial evidence, an array of allegedly positive chemical tests advanced by the prosecution, and the doubts raised by the defence as to the validity of the results. It had to weigh the research results from Dr Rieders above and deliver a verdict. This only took two hours.

The unanimous jury found Dr Jascalevich was not guilty of the charges of murder for which he had been tried. He was acquitted, but his licence to practise medicine was revoked by the New Jersey Medical Licensing board for seven unrelated counts of malpractice. He skipped the country, leaving his attorney, Raymond Brown, unpaid.

Jascalevich died in 1984. Riverdell Hospital changed its name, but it remained tainted with the scandal and closed.

One of us has recently reviewed this case from a medical viewpoint.2 Some 20 years ago, L H Hall and R F Hirsch (then associate professor of chemistry at Seton Hall University) presented a view from an analytical chemical perspective and most of our quotations are taken from this source.1 The Jascalevich case has featured in at least two books, with the one by Farber giving the more detailed account.3,4