Free fall: could you parachute to Earth from space? 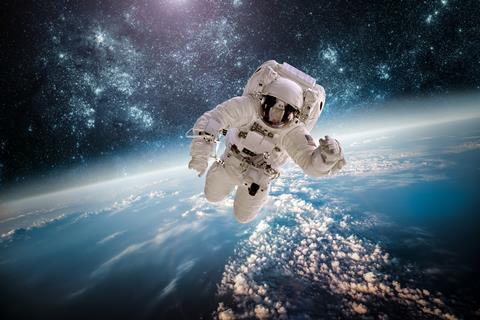 What’s really amazing about Joe Kittinger’s space flight (The planets, BBC TV) is not just that it’s footage of the first manned trip into space but that you see him make the trip without a spacecraft. So how did he do it?

Of balloons and gondolas

In 1960, a year before the Soviet Yuri Gagarin made his historic single orbit around the Earth in a spacecraft, Joe Kittinger’s US air force team was pioneering high altitude helium balloon ascents. As part of Project Excelsior, Kittinger aimed to fly to 31 km (ca 102 000 feet) in a balloon-supported gondola. His only protection from the changes in atmosphere and harsh solar radiation was a basic spacesuit. This suit also controlled his temperature and supplied him with air.

At an altitude of 15 km Kittinger’s right hand spacesuit glove developed a hole and started to leak. The outside pressure at these altitudes is so low that his skin around the hole was therefore exposed to a vacuum. The water and blood in his hand would evaporate considerably and even boil at such low pressures. Rather than abort the historic mission though he simply plugged the hole with his other glove and continued.

An hour and a half after lift-off he was at 31 km (102 000 feet). Here the air is so thin that the characteristic scattering of sunlight by the atmosphere, which makes the sky appear blue, does not take place and so Kittinger found himself looking out into black space. At this altitude the ambient temperature is around -70 °C.1

Once up at this altitude Kittinger spent just a few minutes making routine measurements and then set up his equipment for his descent. He simply stepped off the gondola to make a free-fall parachute jump back to Earth. At first he felt no sensation of falling because the pressure/density of the atmosphere was too small to make an impact. Within a few minutes though he arrived back into what we would consider the main part of the Earth’s atmosphere and at 5.5 km he pulled his parachute cord and, completing this amazing trip, landed safely.