Can a urine test offer insight into George III's insanity?

Analysis of George III's urine at the height of his insanity revealed a deposit in the shape of a blue ring, characteristic of indigo. But what could have been the source of indigo and was it linked to his dementia?

Most of us pay little regard to the colour of our urine. The various shades of yellow are caused by the presence of a variety of pigments - urobilins - the degradation products of haemoglobin. But other colours are possible: red, orange, and even green, purple, brown and blue. The first of these should necessitate a visit to the doctor. Blood tints the urine red, and needs early investigation. But what about shades of blue and green? Possibly the most famous report of blue-tinted urine is that of George III (1738-1820) just before he became too ill to rule. Does the colour give us any clues to the cause of his eventual fall from power?

Shades of blue, purple and green in the urine could originate from either ingesting a blue dye or pigment, or from the biochemical conversion of food into indigo, well known now as the blue dye used to colour jeans.

Prussian blue (an artists' pigment, formerly used in some inks) or the water-soluble methylene blue were possible dye candidates in the 19th and early part of the 20th century. Methylene blue was also used during this period in minute amounts in patent medicines - eg Boots Back and Kidney Pills - to persuade the gullible, from the tint imparted to their urine, that good was being done. The dye was also used to treat malarial fever, gonorrhoea, diabetes and even in experimental therapy to control mania in disturbed patients.1  Here the dose was large and the patients' urine assumed the colour of writing ink.

The connection of blue urine with indigo, a product from the woad plant or the shrub, Indigofera tinctoria, was investigated most persistently by Edward Schunck, a rich Manchester chemist who spent much of his life (1820-1903) investigating dyes of natural origin (see Box 1).2

(The last three reactions are characteristic of plant-derived indigo.)

With these tests available to confirm the presence of indigo, Schunck then devised a method for detecting the indigo precursor in urine. He added basic lead(II) acetate (ethanoate) solution to the urine and filtered off the white precipitate (lead sulfate, chloride and urate). He then added ammonia to the filtrate which again gave a white precipitate, which he removed and added to dilute sulfuric or hydrochloric acid, sufficient to neutralise the lead hydroxide, and filtered. When indigo was present it formed a film of blue solids on the surface of the liquid, sometimes only after 24 hours if a small amount was present.

Using this procedure, Schunck examined the urine of 40 individuals, all apparently healthy, aged between seven and 55 years, mostly of the working class. In all but one case the result was positive. The largest amount of indigo was obtained from a man above the age of 50, a publican by trade.

In Schunck's self-experimentation he found his amount 'varied most capriciously from a tolerable quantity to a mere trace'.3  He thought this variation might be caused by different types of diet, but after many experiments he found one which was really effective: 'I took on the next night, before going to bed, a mixture of treacle and arrowroot, boiled with water in as large a quantity as the stomach could bear, and the effect was that the urine of the following night gave a large quantity of indigo-blue'.3

And the link to George III? 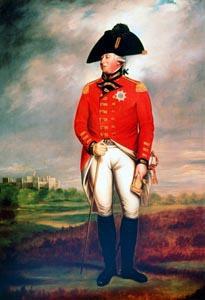 George III was born on 4 June 1738 in London, became king in 1760 and died after a reign of nearly 60 years in 1820. He is widely remembered for two things: losing the American colonies and going mad. He had four bouts of insanity, the first in 1788, after the declaration of American independence on 4 July 1776 and the end of the American war with surrender by British forces in 1782, followed by reoccurrences in 1801, 1804 and 1810. Throughout these periods he also showed many of the symptoms of porphyria (see Box 2). George became permanently deranged after the 1810 episode. He was blind and mentally unfit to rule so his eldest son - who later became George IV - acted as Prince Regent from 1811.

A report in the British Medical Journal  (BMJ) in 1966 by a mother and son team of psychiatrists, Ida MacAlpine and Richard Hunter,4 claimed that King George III's insanity was a classic case of porphyria.This prompted the play by Alan Bennett The madness of George III,5  which in turn prompted Wilfred Arnold, writing in The Lancet  in 1996, to re-examine the original 1811 reports which mention a blue colour of the King's urine.6

On the 6 January 1811, Sir Henry Halford, one of the attending physicians, wrote of the King's urine: 'The water is of a deeper colour - and leaves a pale blue ring upon the glass near the upper surface.' 6  The blue ring may have been indigo, and as Edward Schunck showed, it is not an uncommon physiological phenomenon. There may have been no connection between this and the King's insanity, which may have had other causes.

Although some medical writers choose to connect urine containing indigo and indirubin with illness (notably Crohn's disease and acute myelomonocytic leukaemia),7  we have not found it linked to mental instability.

And what would have been the source of the indigo? Physicians treating John Good in 1901, who had among other symptoms 'peacock blue' urine, had a theory: 'It was due to the formation of indigo through oxidation of the indican that results from the putrefactive activity of the Bacillus coli upon the products of tryptic digestion (see Scheme 1).8

This view has been recently amplified by Professor Wilfrid Arnold: 'Because the patient was constipated, putrefaction during stasis (sluggish performance) of the bowel led to indole formation from dietary tryptophan by the normal intestinal flora. Some indole was absorbed into the blood stream and converted in the liver first to indoxyl and then to the sulfate ester (see Scheme 2). The colourless, water-soluble indoxyl sulfate (metabolic indican in the older published research papers) was excreted in the urine. In the presence of a sulfatase of bacterial origin, either from urinary tract infection or as an environmental contamination of the chamber pot, indoxyl was slowly released by hydrolysis and oxidatively dimerised to indigo, which precipitated on the porcelain', (see Scheme 3). 6

The later stages of this hypothesis were vividly demonstrated by using urine fortified with indoxyl sulfate and Providencia stuartii - a bacterium associated with urinary tract infections and known to have sulfatase activity). Sir Henry Halford's blue ring was thus seen again.6 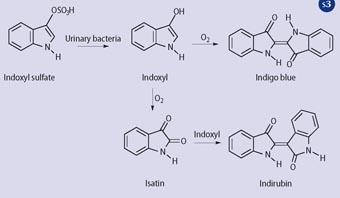 Scheme 3 - Conversion of indoxyl sulfate to indigo, and the blue ring

Initially, MacAlpine and Hunter thought George III had the most common type, intermittent porphyria, but they changed the diagnosis to variegate porphyria after learning that some of George's descendants were abnormally sensitive to sunlight, a characteristic of this type of porphyria. This view was generally supported by Wilfred Arnold5  30 years later, but there are still critics who claim 'not proven': 'Arnold perpetuates the fable that King George III had acute porphyria'.9

Chris Cooksey is retired; Alan Dronsfield is professor of the history of science in the faculty of education, health and sciences at the University of Derby, Kedleston Road, Derby DE22 1GB.

Henry Edward Schunck was born in 1820. As his surname suggests, he was of German lineage, his grandfather serving in the army of the Elector of Hesse. This was 'rented out' to the British to fight in the American War of Independence, but there is some doubt as to whether he actually went to America.2  Edward's father (Martin) came to Manchester in 1808 and was a prosperous calico printer and international merchant. Edward was educated at a private school in the city and had several recollections of John Dalton, founder of the atomic theory, who lodged there.

Clearly a committed chemist even in his boyhood days, Edward did his first practical investigations in the works' laboratory of Charles Henry, a manufacturer of patent medicines. He studied later at Berlin and then under Justus von Liebig at Giessen, where he obtained his PhD (1842). He returned to Manchester to manage the calico printing business, but he was sufficiently wealthy to leave the day-to-day running to others. He built a large house with an attached laboratory at Kersal near Manchester and spent some 60 years independently researching into the chemistry of natural colouring materials [madder, indigo (including it occurrence in urine), Tyrian purple (6,6'-dibromoindigo)] and chlorophyll. He published some 100 papers. A noted philanthropist, on his death he bequeathed to the University of Manchester his extensive library on dyestuffs, his laboratory and some land in Kersal.

Porphyria is an inherited defect in metabolism in which porphyrins are overproduced in the body, mainly in the liver and bone marrow, and excreted in the urine and faeces. Symptoms include acute abdominal pain with vomiting, and because of the effects on the nervous system, produces cramps and paralyses of the muscles which may affect respiration. It is characterised by periodic attacks in which, sometimes, the skin becomes sensitive to light even to the extent of blistering. There may be sensory and mental changes; the pulse rate and blood pressure rise.

Experiment: test your own urine

Teachers are advised that experiments on body fluids must be thought through very carefully, if necessary ascertaining institutional policy. A student should only work on his/her own urine and pay particular concern to the disposal of waste solutions and the cleaning of contaminated glassware. The test depends on the decomposition of indican to indoxyl and subsequent oxidation to indigo. This is concentrated in the organic layer to make measurement easier.

Prepare the test (Obermeyer) reagent by dissolving iron(III) chloride (0.8 g) in concentrated hydrochloric acid (100 cm3). Place fresh urine (5 cm3) in a test tube and add an equal volume of Obermeyer reagent. Stopper and mix. To this mixture, in a fume cupboard, add chloroform (trichloromethane) or dichloromethane (2 cm3), stopper and invert several times over a period of about five minutes to allow the colour to develop. Allow the chloroform or dichloromethane (lower) layer to settle, then remove with a Pasteur pipette and wash with water. Remove as much water as possible with the pipette and add anhydrous sodium sulfate drying agent. Indigo, if present, tints the chloroform or dichloromethane layer blue. The identity of the dye may be confirmed by thin layer chromatography. Solid indigo will not dissolve directly in either of the two solvents, though the following route is successful.

'Dissolve' a few mg of indigo by adding to sodium dithionite (0.5 g) dissolved in hot water (30 cm3). The reduction product is a pale yellow colour. Allow this to cool and spontaneously air-oxidise to form a blue colloidal-like solution. Take about 5 cm3 of this solution and treat it as before with Obermeyer reagent and chloroform or dichloromethane. Shake gently and sufficient indigo will dissolve in the organic layer for tlc purposes. Extract and dry as before. Dilute this solution of indigo so that its tint approximately matches that produced from the urine experiment. Spot the 'indigo from urine' sample against the authentic indigo solution on a silica gel tlc plate. Allow the spots to dry and elute with a 50:50 mixture of ethyl ethanoate and 60/80 petroleum ether or cyclohexane. The two spots will travel up the plate at an identical rate, Rf 0.67 (approx).

Access the 1901 report on blue urine published in JAMA