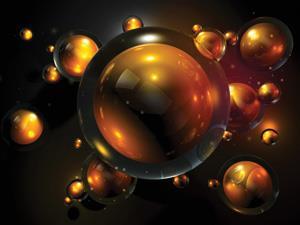 Look inside a school chemistry textbook and you’ll find that gold only has a small section dedicated to it and it usually says something along the lines of: gold is a soft shiny metal, it is unreactive and alloys with silver or copper are used in jewellery and coins. But, there’s so much more to gold. It can be used to catalyse the process that occurs in catalytic converters and in a process to clean wastewater, for example. It even catalyses the reaction that deodorises toilets in Japan. So, why is gold generally considered to be unreactive?

When it’s in its bulk state, such as in jewellery, gold doesn’t react with oxygen or water as most metals do, says Graham Hutchings, professor of physical chemistry at the Cardiff Catalysis Institute (CCI). ‘Most other metals will react with oxygen to form an oxide, even if it’s only a thin surface layer,’ he says. ‘Iron, for example, will rust very easily when it reacts with water and oxygen,’ adds Stuart Taylor, also a professor of physical chemistry at the CCI. ‘But the atoms in gold are very happy to be bound to each other and don’t want to react with anything else. It’s a very stable structure – you can dig it out of the ground after thousands of years in perfect condition, just like Tutankhamun’s death mask.’

‘It’s only when you divide gold down to a few hundred, a few tens or even a few atoms that it becomes reactive because its structure has changed,’ says Graham. ‘One of the best ways to do this is to make gold nanoparticles from solution,’ says Stuart. The gold is dissolved in an acid to make a yellow solution of gold ions. The ions are then reduced by an agent such as sodium borohydride. As the gold is reduced, its atoms start to stick together, and can form nanoparticles that consist of about 1000–1500 atoms. At this point, other chemicals are added to stabilise the newly-formed nanoparticles. ‘This stops them growing further, otherwise they just grow back into a big lump and fall out of solution,’ says Stuart. ‘After we’ve made the gold nanoparticles, we add a solid and the nanoparticles stick onto its surface. Then we filter off the solid to end up with a material that has lots of gold nanoparticles dispersed over its surface. That’s the catalyst that we’ll use to catalyse other reactions.’ 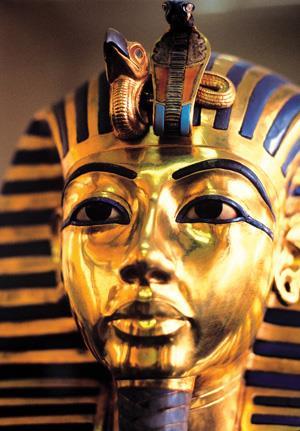 The gold in Tutankhamun's death mask has survived over 3000 years

Despite the fact that the Romans had used gold nanoparticles to colour glass, it wasn’t until the 1980s that their usefulness was discovered in scientific research. This discovery was made around the same time in separate projects, published first by Graham Hutchings and then by Masatake Haruta from the Gold Research Institute at Tokyo Metropolitan University.

Masatake found that gold nanoparticles could catalyse the low temperature air oxidation of carbon monoxide (CO) to make non-toxic carbon dioxide. The oxidation process is used to remove CO from the air in a range of life support applications: in submarines, deep sea diving, space travel, mining and breathing apparatus for firefighters. ‘Carbon monoxide builds up in these confined environments,’ says Stuart.

Initially, Masatake thought that he was making a gold–metal oxide mixture catalyst. It wasn’t until he examined the structure under a microscope that he noticed that he’d made gold nanoparticles. ‘It was these gold nanoparticles interfacing with iron oxide that gave very high catalytic activity,’ says Graham. Masatake also discovered that the nanoparticles could carry out CO oxidation at –76°C, which is around the lowest temperature recorded on Earth. ‘That’s about 200°C lower than any other catalyst, so gold will do CO oxidation anywhere on the globe.’

Graham was working for a company called African Explosives and Chemical Industries in Johannesburg, South Africa, researching catalysts for the hydrochlorination of acetylene to produce poly(vinyl chloride). ‘This is where acetylene reacts with gaseous HCl to form the vinyl chloride monomer. The industrial catalyst was then, and still is, mercury(II) chloride (HgCl2). It’s an awful catalyst.’ The reaction takes place at 180°C at which point the mercury(II) chloride sublimes and, over a period of months, the toxic catalyst leaches into the environment. ‘This is an environmental disaster, so I was told to come up with a better catalyst,’ says Graham.

Then one wet Saturday afternoon in Johannesburg, he realised that gold could be a contender. ‘My family were busy and I was bored. So I thought I’d do some work,’ he says. He read a paper that contained results of a test of over thirty metal chlorides as catalysts for hydrochlorination. Graham noticed a discrepancy in the results, so he plotted the data in a different way. He realised that if his approach was correct, gold would be the best catalyst for the reaction. ‘I convinced my management that we needed to do the experiments,’ says Graham. ‘Rather than being told I was totally mad because gold would never work, they let me do them. Gold, indeed, proved to be the best catalyst. It still is.’

However, Graham says that vinyl chloride manufacture is still done using mercury(II) chloride as the use of gold has yet to be commercialised. ‘60% of the production is carried out in China with over 12 million tonnes of vinyl chloride being produced each year. 50% of the mercury ore that’s mined every year goes into supporting the process,’ he says. ‘We are going to run out of mercury so it just cannot continue.’ Graham points out that gold is the obvious alternative. ‘It’s far better than mercury – it doesn’t go anywhere, it stays in the reactor and it can be used very effectively, and there’s a lot of gold around.’ 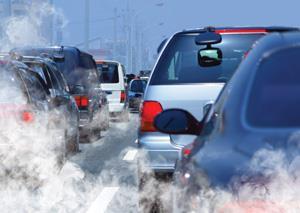 Graham stresses that there is plenty of gold for catalysis, despite the fact that it is prized for being rare. ‘Several hundred tonnes of it are mined every year,’ he says, ‘and you only need a very small amount of it as a catalyst – fractions of a percent will be active.’ As far as cost is concerned, Graham says that the solid support material is usually more expensive than the gold. Also, gold used to be considerably cheaper than platinum, and a lot of platinum is used in catalytic converters, adds Stuart. ‘These days platinum and gold are not that different in price.’

Now, there are a number of companies that are looking at using gold catalysts in car exhausts, says Stuart. It was Graham’s group that showed that if gold was alloyed with palladium, its catalytic activity would be enhanced. ‘A company called Nanostellar then showed that this catalyst was stable at high temperatures and so could be used effectively in car exhaust catalysts,’
says Graham. ‘They’re not used commercially at the moment but who knows, in the future, there may be lots of applications like this to help protect the environment,’ says Stuart.

Much of the research being done at CCI is geared towards protecting the environment and developing processes that use feedstocks more efficiently to create less waste. Graham and Stuart’s research focuses on finding a catalyst that transforms a waste by-product from the production of biodiesel into useful compounds. ‘To make biodiesel from vegetable oil, the oil is reacted with methanol. A lot of waste glycerol is produced,’ explains Stuart. ‘Gold nanoparticle catalysts can be used to convert glycerol into lactic acid, for example, and lactic acid can be used to make biodegradable polymers.'

The group also uses gold catalysts to transform simple compounds into more useful compounds. ‘We want to take a molecule and put oxygen into it, because if you put oxygen into it, you can produce chemicals that are a lot more valuable for the chemical industry,’ says Stuart. The team carried out selective oxidation on toluene using gold, titanium dioxide and oxygen. This process produces compounds such as benzaldehyde, which is more valuable than toluene.

Graham’s group is currently carrying out pioneering work on catalysing the reaction between hydrogen and oxygen to make hydrogen peroxide. This can purify household wastewater known as ‘grey water’ which can then be reused in the house. Grey water comes out of the bath, sink and washing machine, for example, and contains bacteria so must be purified before reuse. It could then be used to flush the toilet or for washing. ‘It’s a shame that we don’t reuse this water when you think about the shortage of water in some of our cities, particularly London. But we don’t. It goes straight down the sink and joins up with black water (sewage) to be treated,’ says Graham.

‘Since 1999, we’ve known that gold alloyed with palladium is very good at catalysing the reaction of hydrogen with oxygen to make hydrogen peroxide directly,’ explains Graham. With their catalyst, Graham’s group can make hydrogen peroxide in a continuous flow reactor. ‘We hope that we can get it commercialised,’ he says. ‘My dream is that we go one step further and come up with a device that could create drinking water in remote locations, such as Africa. That would be fantastic.’

Is gold up to standard?

‘There are probably 1000 academic papers and several hundred patents a year on the subject [of gold catalysis] and it’s starting to be commercialised in various processes,’ says Graham. Despite this, there are challenges ahead in convincing industry to switch to gold catalysts. ‘The big challenge is to convince them that we’ve got something better because they’re very often running their processes on a very large scale. These are very well controlled processes, which are operating very efficiently,’ says Stuart. There may be opportunities to switch to gold catalysis in areas such as the manufacture of fine chemicals for the pharmaceutical industry because these are often a lower capacity production.

‘When we’re making catalysts, gold is just another element that we can now use,’ says Stuart. One thing that the team at CCI is doing is trying to combine gold with other elements. ‘Gold can be very good on its own but when you combine it and make nanoparticles that are alloys for example, the properties can be even better. Until a few years ago, people wouldn’t have thought of using gold. Now you’ve got this whole new palette of things you can make as well. I think at some point, there are going to be commercial catalysts based on gold, but it’s very difficult for me to say when. We just try our best to get things to work and try to get people interested. Very often it’s the economics and the business side that finally decides.’