There are all sorts of ways chemists can use their skills to aid global development, writes Josh Howgego 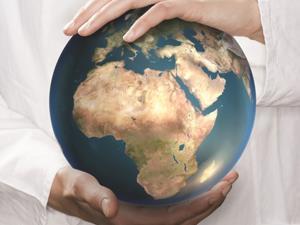 By the time I’m old enough to forget my grandchildren’s names I would like to be able to say I’ve done some good in this world. Maybe you feel the same? If so, I have good news for you: you’ve chosen your specialism well. Chemistry can change the world for the better.

I know this because after several years in university chemical laboratories, I switched careers and became a science journalist. And, somehow, I have found myself writing a lot about how science, including chemistry, plays a part in the growth of developing nations. So if you’ve ever felt a vague sense that you’d like to do something meaningful with your scientific career – well, you can. There are several ways you can go about it – and a few pitfalls to avoid.

One of the most common things I write about is scientists who have used their knowledge and skills to help solve problems that exist in the developing world. Chemists often feature among this group because the subject is so practical. An illuminating and rather fun example is a research paper that appeared in July last year suggesting that chemists in the developing world do their reactions in bubble wrap. 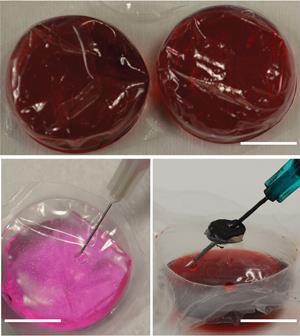 It almost goes without saying that plastic multi-well plates that chemists use to run lots of small scale reactions and tests in parallel are expensive and not always available in developing nations. The same goes for round-bottomed flasks. (Even if chemists can afford them, supplies can take weeks to deliver.)

Harvard chemist George Whitesides’ research group became interested in bubble wrap when they noticed its similarities to these plates: it has row upon row of small, sterile containers.

The team showed that it is possible to do several types of reaction in the bubbles, and even grow bacteria. In particular, they showed the bubbles could be pre-filled with a cocktail of chemicals, then used as a portable test kit for anaemia (see Bubble wrap blood tests). They also showed that chemists in developing nations could use the bubble wrap to try out small scale chemical experiments, using them as electrochemical cells, for example.

There are several niggles with the bubble wrap reactions idea. For example, the chemicals needed to test for anaemia include a source of toxic cyanide anions and if the bubble wrap was popped, the chemical could escape. Another problem is that once chemicals are injected into the cells with a needle, they need to be firmly sealed up again to prevent leaks. Whitesides recommends this is done with nail hardener solution, which sounds as though it may not be foolproof, even if we accept that nail hardener is as cheap and widely available in the developing world as Whitesides says it is. Nevertheless, the idea is certainly an improvement on not having any container to do a reaction in, and Whitesides thinks it could be improved with more research.

Whitesides’ paper suggests that bubble wrap could be a useful material for conducting blood tests for anaemia in poor rural villages. Here’s how it could work:

Anaemia affects almost a third of the global population, with many sufferers in devloping nations, according to the World Health Organization. If you have anaemia, you are often very tired, meaning you can’t do much work. And in children, the condition impairs physical and mental development. So the researchers’ invention could be a boon for health workers operating in developing regions.

So how helpful could this innovation really be to people in developing nations? There is a line of argument that equipping scientists with tools that allow for more and better research leads, in itself, to poverty eradication. The theory here is that scientific research yields new knowledge and technologies that citizens can then develop and commercialise. The resulting companies pay tax and boost the country’s economy, benefiting everyone.

Yet the evidence for this theory is far from conclusive. The UK government’s Department for International Development (DfID) recently produced a literature review that showed there was little evidence that enabling research in developing countries drives economic growth there. That does not mean the invention won’t be helpful to some individuals, or go some small way to boosting GDP in any nations that decide to take it up. It’s just that, statistically speaking, there is little evidence to suggest that research on its own always boosts economies.

On the other hand, the research does promise a fix to a tangible problem: the cost of plastic labware used in anaemia tests. DfID’s literature review shows there is good evidence that new technologies – from life-saving drugs to fuel-saving cookstoves – improve people’s health. This does seem to have a tangible effect on reducing poverty, presumably because those people can then access education or find a job. There is a caveat: there are many technologies that work on paper, but fail to deliver once on the ground because they do not fit into existing cultures, or ways of working.

I make all these points because I think it’s important for scientists in the global north not to imagine they can parachute a new technology into a poverty-stricken region and solve all its healthcare problems in a flash. Our bubble wrap example, with its potential snags, makes that clear. Yet if technologies do make sense in the context of local culture and conditions, there is reason to be optimistic that they will do some good.

Hopefully, I have convinced you that finding chemistry-based solutions to developing world problems can and does work, if thought through properly. So let’s look at another problem where chemistry can help: mercury poisoning among gold miners.

Gold mining is a popular profession in parts of the developing world, notably northern Africa and Latin America. This is partly because miners can achieve good prices for their gold – often about 70% of the amount international buyers pay – whereas other industries, such as farming, can be less fruitful.

Unfortunately, mining is also hazardous. Gold miners that operate in small, informal teams – so-called ‘artisanal gold miners’ – used 1400 tonnes of mercury in 2011, according to estimates reported by the United Nations Environment Programme. Miners often add mercury to powdered rock thought to contain gold. They do this because mercury forms an amalgam with gold, meaning tiny specks of the precious metal coalesce into larger lumps that are easier to filter out. Miners then heat these lumps up, evaporating the mercury (which boils at 357°C), and leaving what is called ‘sponge gold’ behind. 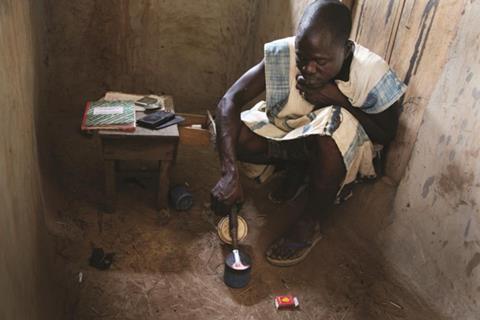 It’s a neat, but also a dangerous, chemical trick. Mercury is highly toxic. Breathing the fumes can cause flu-like respiratory problems at first. But quicksilver also causes serious damage to the nervous system so it often leads to problems with concentration, sight and touch. And containment of mercury is also a problem. If they’re not careful, miners can end up releasing the chemical into the air and environment where it enters the food chain. In some areas, people have become very ill after eating oysters or other seafood that had been exposed to huge mercury concentrations.

But chemists have devised ways to separate out gold based on simple chemical principles. For example, gold is heavier than most rock, so using centrifuges or sluices can help concentrate it. Then miners have to use a lot less mercury in the final purification step. And instead of simply burning off the mercury from a spoon held over a flame, miners can be shown how to create distillation set-ups that keep the substance contained. Organisations such as the Artisanal Gold Council work directly with miners to help them find solutions that work for them and avoid as much exposure to mercury as possible.

Both of the previous stories have shown how chemistry can be directly applied in the field. But there are also opportunities to make a difference to people’s lives with fundamental research from the lab bench.

Take crystallography for example. In 2014 I spoke to Juliana Torini, a PhD student at the University of São Paulo in Brazil. She studies the biochemistry of parasitic worms of the schistosoma variety. These worms cause a disease called schistosomiasis that affects 240 million people worldwide, most of them in the tropics. The worms’ eggs induce an immune response in people, resulting in diarrhoea and abdominal pain. If cases go untreated for some time, there can be a range of other symptoms, including damage to the liver and kidneys and genital lesions.

Schistosomiasis can be treated effectively with praziquantel, an affordable drug; however, it is not clear how it works and infection can come back at any time after treatment. There are also fears that the worms could develop resistance to the drug, so there is interest among scientists in understanding more about the worms’ chemical biology with a view to developing drugs against it.

That is why Juliana flew to Oxford, UK, in July 2012 to spend some time working at the Oxford Protein Production Facility. She was working on growing crystals of adenosine phosphorylase, a protein that is a key part of the cellular machinery that makes adenosine triphosphate, the molecule organisms use to store and manipulate energy. Armed with the crystalline form of the protein, chemists could use x-ray crystallography to work out its structure and use that information to design molecules that could block it.

Juliana’s visit to Oxford was part of a collaboration between her supervisor at the University of São Paulo, Humberto Pereira, and José Brandão-Neto, a Brazilian researcher who now works at Diamond, a powerful light source in Oxfordshire that can be used to determine the structure of large and complicated proteins. Machines like Diamond are vital for this sort of work, but as you might imagine, they are fairly scarce in the developing world (though Brazil is now building a more powerful synchrotron of its own, called Sirius). 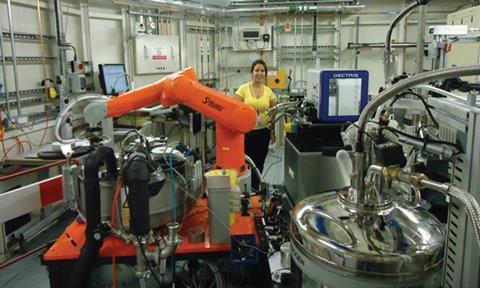 So it’s important that chemists who do have access to state-of-the-art tools in the UK and elsewhere in the developed world continue to care about neglected diseases like schistosomiasis, and keep looking into it.

If you haven’t thought much about how science fits into global development before, now is a good time to start. 2015 is the year when the Millennium Development Goals (MDGs) end. This set of targets ran from 2000 to 2015 and were designed to act as a rallying point for non-governmental organisations and governments. They include challenges like combating HIV, promoting gender equality and eliminating extreme poverty.

But with these goals expiring, a new set is currently being agreed by the United Nations. The new goals, which will be finalised this September, are known as the ‘Sustainable Development Goals’ and will run from the end of 2015 to 2030.

If there’s one thing I’ve learnt from reporting on global development, it’s that the low-hanging development fruit is gone. There’s been fantastic progress in many areas through the MDGs, much of this – including the progress on HIV – due in large part to contributions from scientists. But the problems we have left over are outstanding because they are more intractable.

Josh Howgego is a science journalist at SciDev.Net.