Chlorine is becoming greener; not in the colour, of course, but in the environmental impact of its manufacture. Mercury emissions have decreased over the years, thanks to changes in plant design. Now the energy requirements, and thus carbon dioxide emissions, are due to follow suit. 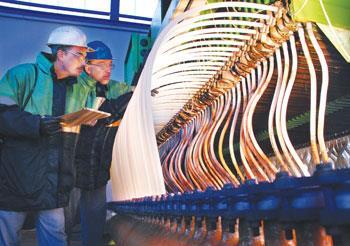 Chlorine takes its name from chloros, the Greek word for 'pale green', since that is how we see it. Chlorine is in fact one of the few gases that has a colour. However, many people see chlorine as very far from green in the environmental sense, and they have some justification.

Despite the associated environmental problems, we cannot live our modern lives without manufacturing chlorine by the megatonne. Some 55 per cent of European chemical production relies directly or indirectly on chlorine, and for pharmaceuticals the figure is 85 per cent. Consequently, we produce about 10 million tonnes of chlorine annually in Europe, and over 60 million tonnes worldwide.

Most chlorine is generated by electrolysing brine (sodium chloride solution), using three basic types of cell: mercury, diaphragm and membrane. Each type of cell employs a different technology to separate the chlorine from the co-products, hydrogen and sodium hydroxide solution (Fig 1). 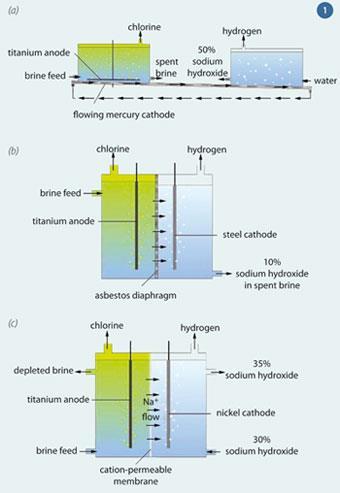 Figure 1: (a) Mercury cell. Discharging Na+ ions at the mercury cathode forms sodium amalgam, which flows to the 'decomposer' compartment, where it reacts with water.

(b) Diaphragm cell. Brine flows through the diaphragm from the anode compartment to the cathode.

(c) Membrane cell. Only Na+ ions pass through the membrane, which is impermeable to anions.

All three types of cell generate chlorine by electrolytic oxidation at the anode.

Their differences lie in the cathode reactions, energy consumption and environmental effects.

Flowing mercury cathode cells, which evolved from Castner and Kellner's original 1890s designs, dominated the industry throughout the 20th century. They produce high purity sodium hydroxide at about 50 per cent concentration.

The problem is that mercury is lost from the cells at a rate of 100-200g per tonne of chlorine (g t-1), carried along with the products and effluent, although the vast majority is subsequently recovered.

In Minamata Bay, Japan, in the late 1950s, severe cases of mercury poisoning were found to have been caused by eating fish and shellfish contaminated with methyl mercury.1 The source was traced to a large local chemical plant; not a chlor-alkali plant, but the incident gave impetus to efforts to reduce losses from mercury brine electrolysis cells, and to develop alternative technologies.

Improved recovery methods have reduced mercury losses, and thus emissions, by over 95 per cent during the past thirty years (Fig 2),2 and by 2007, losses were less than 1 g t-1 (1 ppm).3 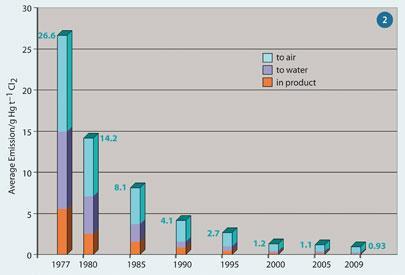 Figure 2 illustrates the 'law of diminishing returns' faced by chlorine producers: The lower the concentration of unrecovered mercury, the more difficult and expensive it becomes to recover any more. It's like finding and removing a smaller and smaller needle in the proverbial haystack.

Diaphragm cells, also originally developed in the 1890s, are mercury-free, but have other drawbacks.

Although they require a lower voltage than mercury cells, and thus less electrical energy, all the brine passes through the diaphragm, diluting and contaminating the sodium hydroxide produced. Consequently, additional energy is needed to purify and evaporate the sodium hydroxide to the 50 per cent concentration achieved with mercury cells. This makes the energy requirements of mercury and diaphragm cells very similar.

Membrane cells operate at similar voltages to diaphragm cells, since the electrode reactions are the same. However, membrane cell sodium hydroxide requires no purification and less evaporation, so the overall energy consumption, and consequent carbon dioxide emissions are lower. This makes membrane cells the 'greenest' option of the three.

A new development, membrane cells with oxygen-depolarised cathodes (ODC), promises much greater energy and emissions savings and are described later.

Table 1 compares the energy requirements of each cell type, and the carbon dioxide emissions associated with the production of this energy.

The transition from mercury to membrane cells

Once membrane technology was proven, it became unacceptable to build new mercury cells. However, decommissioning plants well before the end of their 40-60 year life, and installing new membrane cells, is not economically feasible. So, despite the operational advantages, the transition from mercury to membrane technology is ongoing, with the emphasis meanwhile on reducing mercury emissions from existing plants.

Following Minamata, most Japanese mercury cells were phased out by 1987, with the final two closures in 2003. The US has traditionally relied more on diaphragm cells, and only about five operational mercury facilities remain, while Europe has a higher proportion of mercury cells, and phasing out has been more gradual. Between 1980 and 2010 just over half of western European mercury cell capacity (some 4.5 Mt per year) was closed down and diaphragm cell capacity declined, by about one-third, while membrane cells were installed at an increasing rate (Fig 3).4,5 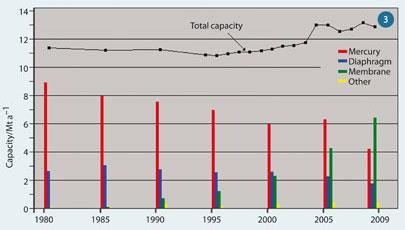 Whichever type of cell is used, brine electrolysis generates one mole of hydrogen for every mole of chlorine produced. In the past, if not required as a reactant for other processes, the gas was often simply vented to atmosphere. However, with increasing energy costs, it became economic to recover some energy by burning this hydrogen to raise steam.

The European target has been to reach an average hydrogen recycling rate of 95 per cent by 2010. However, from 2002 to 2009, the figure hovered between 85 per cent and 90 per cent, with some companies achieving much less, so the target has probably been missed.3,5

On a more positive note, advances in fuel cell technology have made it feasible to use the hydrogen directly to generate some of the brine cells' electricity requirement. In August 2009, petrochemical company Ineos announced its intention to develop such a facility at Runcorn, the UK's only chlorine manufacturing site.

The development of a new type of cathode for membrane cells promises to significantly reduce energy consumption, since the operating voltage is lower.6

As usual, chlorine is generated at the anode by oxidation.

At a normal cathode, water is reduced to hydroxide ions and hydrogen gas

Using an 'oxygen-depolarised cathode' (ODC) instead, hydroxide ions are produced without generating hydrogen. Oxygen gas supplied to the cathode is reduced to oxide ions, and thence hydroxide ions.

Because the difference between the anode and cathode electrode potentials is smaller, ODC cells have a lower operating voltage. Under operational (as opposed to standard) conditions, the reduction is about one volt, allowing electrolysis to occur at about two instead of three volts, which saves around 30 per cent in electrical energy and associated CO2 emissions (Table 1).

Oxygen-depolarised cathodes, developed for fuel cell technology, have been successfully applied to membrane cells for regenerating chlorine from hydrochloric acid, a by-product of many chlorine-based processes. In this case, H3O+ ions rather than Na+ ions pass through the membrane, producing water rather than sodium hydroxide - but again, no hydrogen. 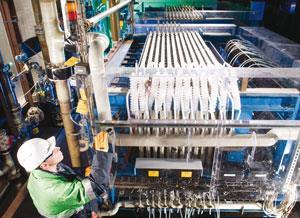 ODC cells being used in practice

ODC cells have been electrolysing hydrochloric acid at Bayer MaterialScience, Brunsbüttel, Germany, since 2003. However, applying them to brine electrolysis was not straightforward.7

The ODC consists of a PTFE-coated metal framework that supports a layer of nanoporous silver particles - these act as a catalyst to adsorb oxygen gas as separate atoms ready for reduction. In hydrochloric acid cells the cathode is in contact with the membrane, and H3 O+ ions passing through react with O2- ions at the cathode. However, in brine cells the Na+ ions passing through carry insufficient water to react with the O2- ions. 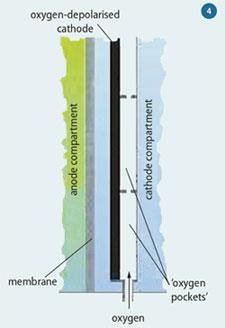 Schematic diagram of an oxygen-depolarised cathode

To solve this problem the ODC is slightly separated from the membrane, to allow water in the catholyte to reach the O2- ions on the cathode. However, this causes another problem. Hydrostatic pressure increases with depth, and at the bottom of the cell the pressure is higher than the oxygen gas pressure, so the liquid electrolyte penetrates the porous cathode, preventing oxygen from reaching it. Conversely, towards the top, the hydrostatic pressure is low, allowing oxygen to diffuse through the cathode and escape into the electrolyte without being reduced.

The ingenious solution was to pass the oxygen upwards through a series of 'pockets' on the back of the ODC (Fig 4), restricting the gas flow, increasing contact time, and thus the chance of reduction. Unreacted oxygen from each pocket flows into the next, but since there is less gas, the pressure is lower. The oxygen pressure thus decreases from bottom to top, balancing the change in hydrostatic pressure.

Using this system, Bayer has trialled brine electrolysis in membrane cells with oxygen-depolarised cathodes nearly three metres square. A 20 kt per year plant is due to come on stream in 2011 at its Krefeld site, north of Cologne.8 Once proven on an industrial scale, it is hoped that ODC technology will become standard on new membrane cells, and be retrofitted to existing cells, making substantial savings in energy costs and CO2 emissions worldwide.

Mike Tingle is an educational consultant and freelance author.