It’s amazing what chemists can do with a jelly-like material that’s mostly water, says Bea Perks 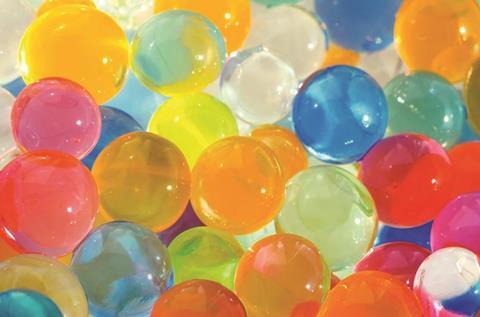 A gel isn’t quite a liquid and it’s not quite a solid, it’s something in between. According to the Oxford English Dictionary, a gel is a colloidal suspension of a solid dispersed in a liquid. In the case of hydrogels, that liquid is water. ‘Hydrogels seem solid but they consist mainly of water, more than 99% in some cases,’ says Neil Cameron, professor of polymer materials at Monash University, Australia. ‘The water is solidified by molecules that form a 3D network throughout the gel.’

One of the most recognisable examples of a hydrogel, at least for anyone who’s ever been to a children’s birthday party, is jelly. Of course hydrogels come in many more varieties than strawberry or lime, and their practical uses extend well beyond entertaining under-fives. But it’s a good starting point, and gives you a pretty good idea of roughly what a hydrogel looks like.

Even before we look at the exciting developments in the pipeline, hydrogels are already in use all around us. ‘There are hundreds of examples, from shampoos to non-drip paint,’ says Alex Routh, reader in colloid science at the University of Cambridge.

An early introduction to hydrogels

Nappies bring us closer to a rapidly evolving area for hydrogels: medicine. There are several simple hydrogels at various stages of clinical approval or practice, says Nik Leipzig, assistant professor of chemical and biomolecular engineering at the University of Akron, Ohio, US – including silicone for contact lenses. 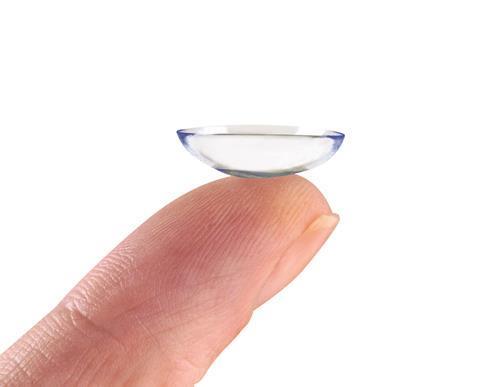 Nik develops chitosan-based hydrogels for wounds. ‘Chitosan has a number of advantages,’ he says, ‘it is abundant in nature, easily sourced from crab/shellfish waste … and closely mimics hyaluronic acid (HA).’ HA is naturally involved in tissue repair, and is used to induce tissue healing after surgery.

Nik’s team has two projects underway with a chitosan-based hydrogel system. In one, they have modified the hydrogel substrate with perfluorocarbon sidechains to allow them to release oxygen and take part actively in respiration. In the second, they have come up with a strategy to temporally guide cellular functions like stem cell differentiation or encouraging nerve cells to extend towards a particular target.

‘Hydrogels that can take an active role in physiology have the greatest clinical potential,’ says Nik. There is a lot of clinical potential beyond his research, he adds, including applications in drug delivery, or the development of sensors that respond to changes such as pH or bacterial growth.

Neil Cameron works at the interface between materials science and biology. His group creates macromolecules and polymers that interact with, interrupt or mimic biological processes. It is an area where hydrogels have great potential, so Neil has recently started working with these materials.

He is particularly interested in current research on double network hydrogels. ‘These have much better mechanical properties than normal hydrogels,’ he says. ‘Andrew Dove has done some very nice recent work in this area.’

Andrew Dove, professor of chemistry at the University of Warwick, UK, is developing double network hydrogels for use in tissue engineering and regenerative medicine. 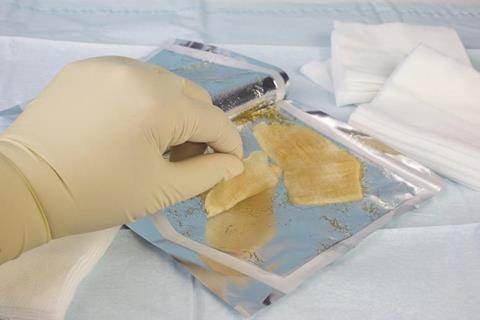 Hydrogels are used in many different medical applications, including these sterile wound dressings

Tissue engineering is attracting wide attention as an exciting field looking to develop biological substitutes to restore, replace or regenerate defective biological tissue. It involves the combination of cells, the scaffolds to support those cells and growth-stimulating signals to direct the cells to where they are needed.

Andrew’s team is using double network hydrogels to construct the scaffolds needed to provide structural support for cell attachment and tissue development. Because they are mostly water, hydrogels have very low surface tension, similar to that of body tissue, he says. We humans are mostly water, after all.

Some of Jian Ping’s double network gels are also very flexible. Her website (http://bit.ly/1Bni4ol), which is well worth a visit, includes a video showing a car driving over a slab of one of these tough, flexible double network hydrogels, leaving it unscathed. A normal hydrogel would squish – think back to the birthday party jelly. With Jian Ping’s double network hydrogels, one of the networks acts as a shock absorber for the other – one of them breaks, and the other one holds the material together and gives it back its shape.

According to Jian Ping’s definition, one of the penetrating networks of a double network hydrogel has to be ionically charged – one of the polymers has to be an ionic polymer. The ionic charge creates a more rigid structure in the gel because the ions repel each other, providing the scaffold for the second network to form around.

Today, however, the term is used more broadly. Andrew’s double network hydrogels simply have two networks within one gel – an interpenetrating network.

‘What we’ve found, and we don’t fully understand it, is that when we compress our gels we see the same behaviour [as Jian Ping’s tough, flexible gels], but because one of the networks is not ionic, we don’t think we’re seeing the shock absorbing property that Jian Ping describes,’ says Andrew. ‘What it means is that our networks can be repeatedly stressed by compression or by extension, they don’t lose their shape or their strength, whereas traditional double network gels do.’

He has a hunch that they may have created a more ‘perfect’ network. ‘There’s less [polymer] chain ends,’ says Andrew, ‘the more efficient your reaction is, the less chain ends you have.’ It hasn’t been proven, he cautions, but it would explain the unusual strength he sees with his gels.

Andrew, winner of an award that recognises original and independent contributions to materials chemistry, is working towards developing double network hydrogels that can be implanted into patients. The gels will have been ‘fed’ with cells from each patient, so that cartilage or ligament – or whatever needs replacing – can be regenerated where it is needed. His team collaborates with biologists to develop ways of incorporating different components into the double network hydrogels in order to encourage different cell responses.

Importantly, these double network hydrogels can be made to degrade as needed. In the case of these hydrogel implants, degradability is essential.

But Andrew is also looking at replacing intervertebral discs – the shock absorbers that lie in between the vertebrae of your spine and hold them together. His team is currently working on the idea that non-degradable hydrogel replacements could eventually act as long-term implants to replace faulty or missing discs.

Of course the final hurdle facing Andrew, and the many other researchers working on equally promising developments, will be the translation of their research to clinical practice. This will rely not only on whether the treatment works and is safe, but whether it can be scaled up from the lab to the clinic, and, crucially, whether it can be made at a price that healthcare systems will accept.