How much horse meat?

It's a simple enough question, but the media, the public and even government officials are having trouble understanding just how much horse meat is in some processed food. Ian Farrell makes sense of the confusion 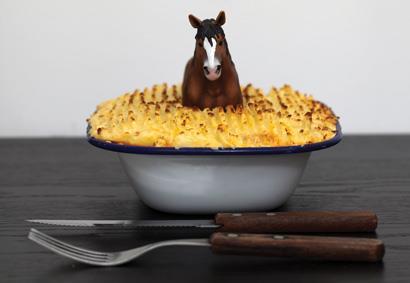 The horse meat scandal broke in January this year, when beef products from the likes of Findus, Tesco and Iceland were found to contain a fair proportion equine-origin meat. Since then, horse meat and food fraud have continued to make headlines, but the way the story as reported by the press can be confusing.

Finding out how much horse is in a food sample is not as straightforward as you might think. The newspapers wrestle with the data from scientists, and struggle to make it understandable to the layman. Even the officials investigating the sample and the politicians have trouble getting their heads around the concepts.

For example, some reports said that economy burgers from Tesco were found to contain 29.1% horse meat - a seemingly well-defined figure. But others quote a range, such as a Findus beef lasagne ready meal containing between 60-100% horse meat. Which of these is the most scientifically accurate?

Liz Moran, president of the Association of Public Analysts, says that to quote a figure of 29.1% was irresponsible in terms of mathematical precision. 'That may have been the absolute value of what was found, but the uncertainty on that value is massive. They shouldn't have reported to one percentage point, yet alone one decimal place.'

The technique of choice used by public analyst laboratories - which undertake testing on behalf of local authorities, government departments and bodies like the Food Standards Association (FSA) - is real-time PCR (polymerase chain reaction). This technique can detect DNA at very low levels and is semi-quantitative, but because of the way it works, the results must be quoted within defined ranges. 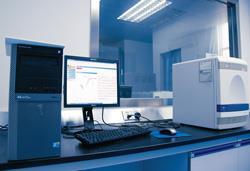 'Rather than just saying "yes, horse is present", real-time PCR can tell you how much horse has been detected,' confirms Moran. 'You get concentration bands, for example less than 1%, 1-5%, etc. But as the concentrations get higher, the bands get broader, so you could be looking at 10-50%, which is a huge variation.'

One source of uncertainty is the difficulty in relating the amount of DNA detected to an amount of meat or protein. 'You're looking for horse DNA, but you don't know where that DNA is from,' explains Moran. 'Is it from muscle fibre, bone, offal or any other part of the horse? Different parts of animals contain different levels of DNA.

'Equally, if you are testing for beef in a lasagne ready meal, how do you know that the bovine DNA came from beef meat? It could have come from the milk or cheese in the sauce, where it's present in very different quantities. This is why the 29.1% figure is very irresponsible. Quoting overly precise single figures causes lots of confusion and is bad for labs too. Officials who are not scientists come to you and say "how can this lab get down to 0.1%?" when actually it's not possible to be that accurate. There are plenty of people [in government agencies] who are struggling with the numbers.'

Duncan Campbell, public analyst at West Yorkshire Analytical Services is equally damning of the 29.1% figure. 'On average, minced meat contains between 50 and 80 ng mg-1 (parts per million) of DNA. With absolute accuracy in the other parts of the assay, and looking at both extremes for the beef and horse meat DNA content, assuming that there is no other DNA there, and assuming that all of the meat ingredients have the same amount of DNA in them, then the range of horse meat in the burgers is 20.4 to 39.6%. Or, more simply, between 20 and 40%.' 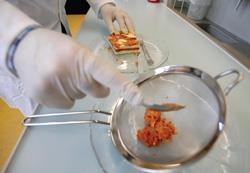 Be careful what you look for

Further uncertainty in real-time PCR comes because the technique only finds DNA from species it is told to look for. Chemical primers, specific to individual animals, are used in the PCR process to amplify the DNA. If an analyst uses primers for sheep, pig and cow DNA, results will come back as a percentage ratio for these three animals, which is assumed to add up to 100%. But there could be other animal DNA in the sample, and if its primers are not included, it won't be detected.

Campbell says this is a major limit of real-time PCR that has to be taken into account when presenting results. 'Although the methodology of the technique is amazing, you start from a position of uncertainty because you don't know how much DNA is in the sample to begin with' he says. 'You'll see figures of "up to 100%" reported, and though that may seem strange it's a correct way of talking. The caveat behind that statement is there could be other DNA in this sample that we haven't looked for . we didn't look for chicken, kangaroo or any other type of meat so we can only say "the burger is up to 100% horse meat."'

There's a rat in my kitchen

So how do analysts decide what to look for? There has always been speculation about what might be in meat of dubious quality - from rat and pigeon to kangaroo and ostrich. Even the chief executive of Iceland, when talking on the BBC's Panorama programme about his company's beefburgers, commented 'Did we test for horse? No. But we didn't test for cat or dog either. There might be cat or dog in it for all we know.' A phrase that no doubt would have given his press officer cause for concern.

Moran says that such contamination is unlikely. 'The whole point of food adulteration is that it is economic fraud,' she says. 'The meat you'd want to use to bulk out burgers has to be cheaper than beef, otherwise there's no point. That's why these suggestions of sparrow or rat in meat products are so ridiculous. It just wouldn't be economically advantageous.'

Campbell concurs, pointing out that the economic factor varies with the time of year. 'It's not uncommon to get chicken being substituted for turkey, or turkey being substituted as chicken, depending on which one happens to be cheaper at the time. Obviously turkey is much more expensive around Christmas time, and its price drops over the summer,' he says.

'At the moment my lab is analysing a ready meal that is claimed to be made from ostrich. A disgruntled employee is claiming that it's not - it's actually made from lamb, which is cheaper. We are carrying out tests to see if we can find any lamb in the meals, but if we can't I'll send some samples to another lab that has the PCR primers for ostrich DNA. That's pretty specialised but someone out there will be doing it.'

How much is too much?

The real-time PCR methods used by public-analyst laboratories can detect DNA down to 0.01%.

'That level of sensitivity starts to raise questions of its own,' says Campbell, explaining that it is unrealistic for the general public to expect absolute-zero levels of cross-contamination in processed foods. 'If a food-processing plant is putting a batch of pork-meat sausages through a machine, and that machine is subsequently used to make a product with processed beef, everything has to be cleaned down thoroughly in the meantime in order to avoid detectable contamination of the beef product with pork DNA,' he says. 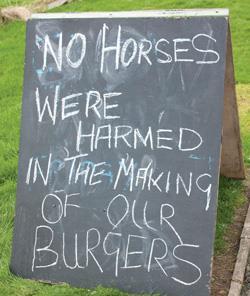 This type of low-level, accidental contamination is very different to the deliberate addition of horse meat to beef, although that doesn't make it a non-issue. 'Pork DNA contamination still has ramifications for those who eat a kosher or halal diet. I think here people probably do expect there to be absolutely no pork in these types of food products,' Campbell remarks. 'But this is a question that needs to be addressed by science, philosophy and religion. When does food stop being halal and become haram because of the presence of pork? It's possible to denature pork to the extent that there is no intact protein present, but those amino acids still came from pigs,' he says.

Moran agrees: 'I think nobody who eats halal food will be happy with, say, 0.5% of pork in their food. And manufacturers of halal and kosher foods shouldn't be producing such food in factories or slaughterhouses where pigs can come near to the food process.'

As the methods used by analysts to detect food fraud get increasingly more sensitive so we, the public, need to keep in perspective just what their results are telling us about the food that we eat, and make informed choices. Public analysts themselves apply common sense to their investigations just as much as chemical technology; the food-buying public would do well to do the same.

Campbell concludes: 'We are all very happy to delegate the responsibility for what we eat out into the food industry, but we have a choice. We must ask ourselves: "how much are we prepared to pay for our food?" Traditional abattoirs cannot compete with the spot prices that meat is selling for on the open market, almost as a commodity. So we have to decide, do we want to pay more for locally sourced meat? Or do we want beef that's come from more than one country, has been moved from place to place for months if not years, and has been stored in deep-freeze warehouses?

'There will always be food adulteration, but rational people see the difference between low-level contamination in mince from the local family butcher that only has one mincer, and large-scale food fraud in processed meals that are the consequence of thousands of business transactions.'

The terms accuracy and precision are used fairly interchangeably in most situations, but there is a difference that is well understood by analytical scientists. A measurement can be accurate, but
not precise. Or precise and not accurate. It's all down to the errors and uncertainties in the measurements performed.

A good analogy is a dartboard. A player aiming for the bullseye, but who constantly misses and hits a spot 10 cm to the left, can be considered precise, but not accurate. There is something wrong with their aim that affects each throw in the same way - a systematic error.

Another player rarely hits the bullseye, but their darts cluster around it. This player is accurate, but not precise. On average, his throw is more accurately heading towards the bullseye, but random, non-systematic errors are spoiling his game.

An accurate, precise player would hit the bullseye every time. And a player who is neither accurate nor precise would never do so.

It is the same in analytical science. Some techniques are precise, but maybe affected by a systematic error. Such systematic errors can be fixed with calibration against known standards, but will always be limited to how good these standards are. Measurements that are not precise, but are accurate, can be improved with statistics - averaging multiple measurements to compensate for a lack of precision.

Ian Farrell is a science writer based in Cambridge, UK