I can see clearly now...

Whether it is to correct eyesight or purely for cosmetic reasons, contact lenses are worn by millions of people. There are now daily-wear contact lenses, ones that can be worn for several days, disposable ones, and even coloured ones. But for whatever the reason, and how long they are being worn, it all comes down to polymer chemistry. 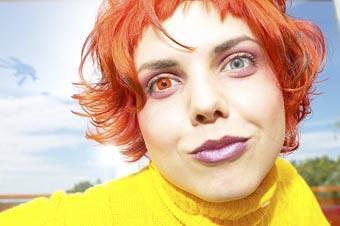 Get 'the look' with clever polymer chemistry

Remedying poor vision has along history. Spectacles are believed to have been invented by Salvino D'Armate of Florence in 1284. Contact lenses took another 600 years to materialise. Although Leonardo da Vinci sketched a few ideas describing these lenses in 1508 he never made any, and neither did the philosopher René Descartes, who in 1632 suggested that a lens placed directly on the eye would be a way of correcting vision. In 1801, professor of natural philosophy at the Royal Institution in London, Thomas Young made a water-filled tube with a tiny lens at the end, which he fitted over his eye but such a design was not practical. Finally, in 1888, F. A. Muller, a glass-blower in Wiesbaden, Germany, made the first glass lens for a patient who had no eyelids. The lens completely covered the front of the eye, and was available for 20 years. However, other patients, notably those of a Dr Adolph Fick at the Ophthalmic Clinic in Zurich, complained that such 'contact lenses' were too uncomfortable to wear for more than a couple of hours and preferred to use spectacles.

Modern contact lenses only became possible with the discovery, in Germany, in 1928 of poly(methyl methacrylate) or PMMA (1) (poly(methyl-2-methylpropenoate)).

At first PMMA was expensive to make so found little use. Ten years later, chemist John Crawford, working for ICI, discovered a method of making PMMA cheaply from propanone, and the polymer became widely available for myriad uses.

Crawford reacted (CH3)2 CO with HCN and NaOH to form (CH3)2 C(OH)(CN) which he then treated with sulfuric acid and methanol to form (CH3)2 C(OH)(CO2 CH3). This molecule is unstable, and spontaneously loses water to form the monomer CH2 =C(CH3)(CO2 CH3), which can be polymerised by heating with free radical initiators at 60-70°C. The process was patented in 1932 and is still the basis of the synthesis of PMMA used today. 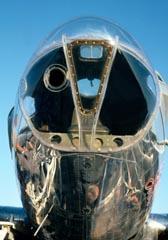 Perspex, as the new plastic was called, was ideal for cockpit canopies and illuminated signs because it was almost unbreakable. It also had a transparency similar to that of glass, which made it suitable for contact lenses.

In 1944 Newton Wesley, of the Monroe College of Optometry in Chicago, made the first contact lenses from PMMA. Together with one of his students, George Jessen, they shaped and polished pieces of PMMA so that they could be used as lenses to cover the eye. By 1955 their company, Wesley Jessen, was fitting contact lenses, each one individually made, to thousands of people. The company is now part of Ciba Vision, which specialises in coloured lenses.

Meanwhile, Californian optician Kevin Tuohy was working on simpler idea - contact lenses that covered only the cornea of the eye. In June 1960 Tuohy's new lenses, which were also made of PMMA, were patented. Patients found them more comfortable to wear and, what was most unexpected, they stayed in place and did not move around the eye balls as one might have expected. Overall, however, Tuohy's lenses were still somewhat uncomfortable and there was the chore of having to leave them in a sterilising solution overnight.

Today's contact lenses may not have reached the perfect state but they are almost there. The most important of features of a polymer for use in contact lenses are transparency, softness, toughness, chemical stability, suitable refractive index, hydrophilicity, and permeability to oxygen. The last property has proven to be the tallest order for the polymer chemist. The cornea needs oxygen to remain healthy and must get it from the air because it has no blood vessels. PMMA does not allow enough oxygen to reach the cornea.

In 1956 Otto Wichterle and Drahoslav Lim modified PMMA by replacing its ester methyl groups with a water-attracting group (ie - CH2 CH2 OH). They made poly(2-hydroxyethyl-2-methyl propenoate), or HEMA (2). At the time they were hoping to find a material that would be suitable for use as artificial blood vessels, but when they dislodged some of the new polymer, which had congealed at the bottom of a test tube, they observed how like a contact lens it looked. The chemists had inadvertently made the first soft lens, which was more comfortable to wear than Tuohy's lenses.

HEMA is a hydrogel, it attracts water and holds it in a framework of polymer molecules. The water absorbs oxygen into the lens and this can then diffuse through to the eye. Even so, the amount of oxygen that HEMA allows through is still less than a healthy cornea requires.

An improved soft lens eventually came in the form of cross-linked poly(2-propenamide) (3) better known as polyacrylamide. This has the ability to absorb and retain up to 75 per cent by weight water. These lenses were marketed by Bausch & Lomb in the US in 1971 under the brand name Soflens and were an instant success.

A problem with these hydrogel lenses, however, was their ability to harbour microbes. Consequently, they needed to be cleaned more thoroughly. Not only did they need to be left in a solution of hydrogen peroxide (a strong oxidising agent and disinfectant) overnight but they also needed to be treated once a week with a protease enzyme. Papain, the enzyme from pineapple, was suitable for this purpose. This enzyme digested any protein residues that the lenses had absorbed from the tears of the eye, which allowed microbes to breed.

These early soft lenses were eventually superseded by ones based on modified HEMA, which were reformulated by adding measured amounts of other polymer precursors and then polymerising the mixture. HEMA polymer absorbs 40 per cent water by weight, but if the methyl groups on the polymer backbone are removed this figure rises to 400 per cent. Different ratios of copolymers were tried until a hydrogel was obtained that had all the right features, including a negatively charged surface. The latter is necessary so that the contact lens clings to the film of tears on the surface of the eye. While these improved hydrogel-based lenses were better than the older forms they still relied on water to transport oxygen to the eye. 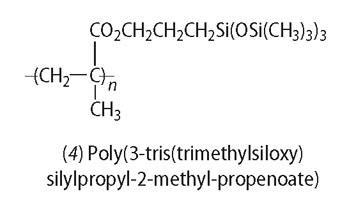 The first 'breathable' lenses were patented in 1974 by Leonard Seidner and Norman Gaylord, who set up their own company and marketed them in 1979. The company was bought by Syntex Ophthalmics, who launched the lenses - rigid, gas-permeable lenses - in 1979. Initially, however, combinations of siloxane and hydrogel gave only an opaque material. Chemists solved this problem by making them from nano-sized particles that were smaller than the wavelengths of light and so appeared transparent. Softer hydrogel contact lenses with siloxane incorporated became available in the late 1980s and within five years sales exceeded $150 million.

Another challenge for the polymer chemist with the early soft-gel contact lenses was that they sometimes glued themselves to the eye balls because they attracted lipid molecules from the cornea and these acted as an adhesive. Today, after much research, there are siloxane-hydrogel materials on the market with water contents ranging from 25-45 per cent to limit adhesion, and all have excellent oxygen absorption and transmission. 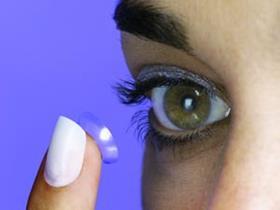 Soft lenses based on siloxane tend to be stiff and though they can be worn when asleep, they are not 100 per cent comfortable. However, Johnson & Johnson chemists in the US have managed to minimise the stiffness of these lenses by reducing the amount of siloxane and putting a layer of poly(vinyl pyrrolidone) (PVP), as a 'wetting' agent onto the surface. This PVP layer was added to overcome a major drawback of soft lenses - that of drying up the eye. As many as half their users report this discomfort, which is sufficiently irritating to cause many of them to discontinue wearing them. Another way chemists have found to counteract dryness is to expose the lenses to a gas plasma which creates a permanent ultra thin layer of silicate, from the siloxane, on the surface. The resulting silicate does not attract lipids and has increased wettability.

The revolution looks set to continue

More recently, chemists at Ciba Vision, US, have produced a contact lens that blocks out ultraviolet light, filtering out more than 90 per cent of UVA, and 99 per cent of the UVB rays which are more dangerous to the eye. (Note: these lenses are no substitute for protective goggles which some workers wear to screen their eyes from uv light.)

The daily ritual of cleaning contact lenses puts many people off wearing them but now there are some lenses that can safely be left in the eye for a week, and there are some experimental ones that have been left in the eye for as long as three months. Ted Reid of Texas Tech University Health Science Centre in Lubbock, Texas, has found that this becomes possible if the lenses are coated with a layer of a selenium compound one molecule thick. The coating is bonded chemically to the lens and tests have shown that it is stable and will remain in place for as long as two years. The new lenses have yet to be approved for sale to the public.

Research into contact lenses continues. Nathan Ravi of Washington School of Medicine in St Louis, Missouri, has developed a hydrogel that can be injected into the eye, there to form a new lens to replace a diseased or ageing one. His research is as yet only in its early stages but it might one day make all external aids to better vision a thing of the past.

John Emsley FRSC is a popular science writer. His latest book is Better looking, better living, better loving published by Wiley-VCH. He can be contacted at JohnEmsley38@aol.com. 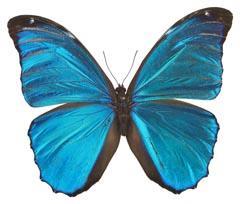 Colour was first added to contact lenses in the 1970s and this was done to make them easier to see. Today colour is added for other reasons, the main one being to enhance the natural colour of one's eyes. You can't make brown eyes blue but you can make blue eyes bluer.

Some lenses use azo dyes, some use nanosized pigment particles such as titanium dioxide, iron oxide and barium sulfate. The size of the particles determines the perceived colour. The most sophisticated lenses use layers of polymer to produce interference colours, in the same way that butterfly wings produce colours without the use of dye molecules. Manufactured by chemists at Bausch & Lomb these lenses consist of five alternate layers of low and high refractive index materials - dielectric films of metal oxides, sulfides, polymers and metal halides. Together these produce constructive, ie in-phase, interference to generate the perceived colour.