If it smells - it's chemistry

Smell is the most chemical of all the senses - but what's the theory behind the practice?

Like Proust, for whom the scent of a madeleine dipped into tea recalled childhood Sunday mornings with his aunt, most of us are familiar with the smell of cut grass, or a piece of blue cheese, or an amazing white wine, or Chanel No 5 perfume. Smell is the most chemical of all the senses, intimately rooted in our memories. But do we know how we smell these 'fragrances'? 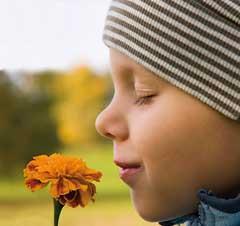 Such smells can be attributed to specific molecules, though the smell of many substances comes from a combination of many molecules. Moreover small changes in molecules can make an amazing difference to their smell.

How do we smell?

Scientists have been interested in how we smell molecules for many years. To be smelt, the molecules must vaporise, either as a result of evaporation if a liquid or sublimation if a solid (eg menthol or camphor). They are therefore fairly small molecules, with a Mr of below about 300 (note some small molecules, like glucose (Mr = 180), are odourless if they are non-volatile).

Molecules that can be smelt must also at least have some solubility in water and be lipophilic. (Note: some volatile molecules cannot be smelled, such as H2O, O2, N2 and, tragically, CO.) 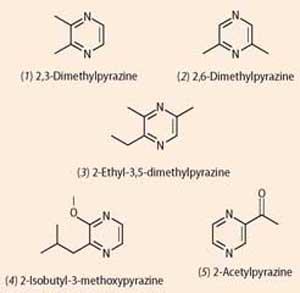 As molecules pass up the nose, they reach the olfactory epithelium, a region of tissue with an area of around 3-4 cm2, near the top of each nostril. Here the volatile molecules meet odour receptors, which are covered in mucus-coated hairs or 'cilia'.

The molecules dissolve in the mucus (and thus need to have some water-solubility) and are carried to the receptors, by specific 'transport' proteins. When you have a cold, your sense of smell is reduced because molecules cannot reach the smell receptors.

Scientists have tried to make links between molecules and their smell using two different types of theory - one based on the shape of molecules and the other on their vibrational properties.

In 1946, Linus Pauling proposed that the smell of a molecule was determined by its shape and size. This idea was taken up by R. W. Moncrieff, and developed by John E. Amoore, and was based on a 'lock-and-key' principle. Amoore suggested that there were seven types of 'primary' odours - camphoraceous, musky, floral, pungent, ethereal, minty and putrid (other types such as almond, aromatic and aniseed were also possibilities). He hypothesised that these corresponded to different shaped receptors, which recognised different 'shaped' odorants. The overall smell was determined by the strength of binding of a molecule to the various receptors.

By the mid-1960s this theory was believed to be inadequate, and was supplanted by the 'weak shape' or odotype theory. This theory, again based on the shape of molecules, suggested that receptors probe sections of a molecule, and that the overall smell reflects the combination of the responses from the different receptors.1 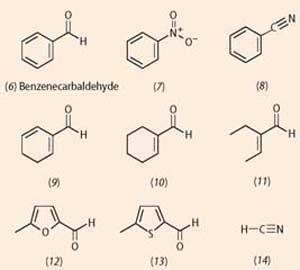 Like most processes involving recognition of molecules, odotype theory was based on a fit with a receptor, similar to enzyme-substrate interactions. Scientists looked for common structural features in molecules of a particular shape. Benzenecarbaldehye (benzaldehyde, 6) for example, is well known for its use in almond essence. Molecules (7)-(14)  have similar, but not identical, 'almond' smells. Note that all these 'almond' molecules, bar one, share the structural element of a multiple bond conjugated with a C=C bond (or its equivalent in a benzene ring). The exception is hydrogen cyanide, a molecule with a very different structure.

Significant smell differences have, however, been reported for molecules with similar shapes. For example, 1,1-dimethylcyclohexane (15) is described as camphoraceous with a faint sweet fruity, powdery, background; the Si substituted analogue, 1,1-dimethyl-1-silacyclohexane (16) has an intense chemical-green note reminiscent of cis -3-hexenol, with a faint camphoraceous background.2  In contrast, silicon substituted analogues of two 'lily-of-the-valley' odorants (17) have only subtly different smells to their entirely carbon-based analogues. In line with this, computer modelling of the fit to the receptor binding site indicated very similar binding.3 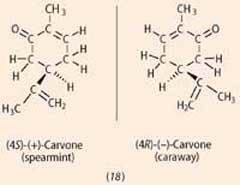 One argument generally given in favour of odotype theory is based on chiral molecules. While most enantiomer pairs have similar smells (to humans), a significant minority have different smells, the most familiar example being the isomers of carvone  (18) (spearmint and caraway smells).4

A'shape-based' theory explains this difference in odour by pointing out that binding of optical isomers to chiral protein-based receptors will differ, whereas the two molecules will have identical infrared spectra. Biophysicisist, Luca Turin suggested that one isomer may be bound to the receptor so that its carbonyl group is oriented unfavourably with respect to excitation, explaining the difference in odour. In an experiment he added pentan-2-one to the 'minty' carvone in a 3:2 ratio. The mixture acquired a 'caraway' odour note, and Turin suggested that this was because 'minty' carbonyl groups were now detectable by the spectroscope.5 However, as the perfume chemist Charles Sell pointed out,6 if the alcohol nonan-1-ol is added to 'minty' carvone, this mixture also acquires a 'caraway' smell, so Turin's experiment was not conclusive.

In 1938 Malcolm Dyson put forward the vibrational theory of smell, which was developed by Robert H. Wright (1964), and has recently been modified by Turin (1996). According to Turin, receptors detect vibrational frequencies of odour molecules. Molecular vibrations, he suggests, are transmitted from olfactory receptor proteins (which effectively behave as vibrational spectrometers) via a mechanism of electron tunnelling. When the receptor site is empty, electrons are unable to tunnel across (traverse) the binding site, because no suitable pathway exists; when an odorant is bound, electrons can lose energy by tunnelling, through exciting an appropriate vibrational mode of the molecule. This electron flow is transmitted through a zinc ion to a G-protein, activating the receptor.5

In favour of the vibrational model, Turin argued that the presence of certain functional groups, such as
-SH and -NO2, often gives rise to characteristic odours (such as 'bad egg') that appear to reflect the functional group rather than molecular shape. He suggested that the 'unique' smell character of thiols (most famously used by skunks) coincides with the S-H stretching frequency ca 2550 cm-1, a region found in few other molecules, though decaborane, B10 H14, whose B-H stretching vibrations also fall in this region, has a similar smell. However, not all thiols have this nauseating smell, a prominent exception being 1- p -methene-8-thiol, the key odorant responsible for the smell of grapefruit.

Turin went on to make the following predictions based on his theory: 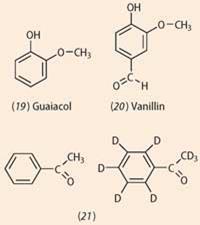 It appears, then, that neither theory is correct. Modern biochemical understanding considers that the arrival of the smelt molecule activates the olfactory receptor (OR) proteins, which span membranes and contain seven helices (7TM receptors). Nerve impulses are sent from the receptors to specific areas of the brain responsible for smell (glomeruli in the olfactory bulb). Signals from each kind of receptor cell are believed to come to the same glomerulus. The pattern of signals arriving at the brain constitutes the 'smell' of the molecule perceived by the brain.

In 1991, Richard Axel and Linda Buck reported on the family of genes coding for odorant receptors.8 (This work was recognised by the award of the Nobel Prize in physiology or medicine in 2004.)

Buck and her team went on to study9 the interaction between individual odorant receptors and C4 -C9 aliphatic odorants with different functional groups (eg alcohol, carboxylic acid), and found that:

The researchers concluded that it is not a case of one odorant for one receptor but rather that different molecules activate a different combination of ORs, and so sends a different signal to the brain. Given that there are around 340 different active ORs in humans (in contrast to around 1000 in mice and rats), this system can discriminate between large numbers of odorants. This explains why though there are only a few hundred different receptors, humans can recognise 10,000 or more different odours.

Even small changes in the odorant molecule, such as using octan-1-ol instead of octanoic acid, produces a change in the combination of ORs detecting it. The researchers also found that a change in odorant concentration may alter its receptor code. This explains why sometimes a substance has different smells at different concentrations; for example, dimethyl sulfide. Other researchers have shown that some neurons in the olfactory cortex only respond when two odorants are present and not when each component is separately present, explaining why mixtures can have smells that are not simply the sum of the component molecules.10

Humans devote a smaller fraction of the olfactory epithelium to olfactory neurons compared with other animals, where the density of receptors is also much greater. Dogs, for example, can distinguish breath samples of lung and breast cancer patients,11 and urine samples from bladder cancer patients,12 evidently because of the presence of minute quantities of volatile organic molecules, acting as biochemical markers (though the molecules responsible have not yet been identified). In a recent experiment olfactory receptors were expressed in yeast cells and attached to a sensor chip, and shown to keep both the selectivity and sensitivity of the natural receptor. This could form the basis of bio-electronic sensors that could detect odorants in urine, for example, that act as markers for the presence of a disease, drugs, or explosives.13 This could add an exciting new dimension to the chemistry of smell.