Post-16 students are challenged to design and carry out an investigation to compare the activation energies of the enzyme-catalysed and the inorganic-catalysed decomposition of hydrogen peroxide.

In our discussions with secondary school teachers in Hong Kong we are told that students, aged 16-17, generally find it difficult to plan their own experiments to determine activation energies for reactions. To address this problem we have devised a laboratory-based investigation which challenges students to compare the activation energies for the catalase-catalysed and iodide-catalysed decomposition of hydrogen peroxide. This investigation should also help them to understand the different effects of biological and inorganic catalysts on activation energy. To make the investigation more authentic, simulating the work of a biochemist for example, students extract catalase from a natural source, in this case lettuce leaves. Our trials demonstrated that lettuce produces a suitable concentration of catalase for this kind of investigation.

The students are given a short introduction to the reaction under investigation, and their task.

Kinetic studies play a significant role in elucidating the mechanisms of a reaction. A catalyst offers an alternative reaction pathway with a lower activation energy than the uncatalysed pathway, thus increasing the proportion of molecules that have enough energy to form products. The decomposition of hydrogen peroxide into water and oxygen can be catalysed by inorganic substances such as iodide ion, iron(II) ion, and manganese(IV) oxide.

This reaction also takes place in human cells. Metabolism of fats and carbohydrates produces toxic hydrogen peroxide as a byproduct. One of the harmful effects of hydrogen peroxide is that it can damage DNA and cell membranes, resulting in ageing. Fortunately, the enzyme catalase, a biological catalyst present in our cells, speeds up the decomposition of hydrogen peroxide into harmless water and oxygen molecules. Catalase is also present in some vegetables and fruits. Examples are onion, carrot, celery, lettuce and papaya. 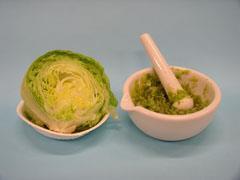 Extracting the enzyme catalase from lettuce

Imagine that you work as a biochemist and want to investigate the catalase activity in lettuce. You have to design and carry out an investigation to compare the activation energies for the catalase-catalysed and iodide-catalysed decomposition of hydrogen peroxide. Based on the activation energies, you can determine whether iodide or catalase is the more efficient catalyst.

Students are expected to get approval of their experimental procedure from their teacher, who must also discuss any safety precautions with them before they begin.

Enzymologists measure reaction rate by following the catalase-catalysed decomposition of hydrogen peroxide by using modern analytical methods such as UV spectrophotometry and chemiluminescence.1  Older methods include titration with potassium manganate(VII) (KMnO4) and colorimetry. Owing to constraints on equipment and time, our students determined the reaction rate by collecting and measuring the oxygen evolved over water in an inverted cylinder.

If we apply the method of initial rate, the concentrations of hydrogen peroxide and catalase can be assumed to be unchanged. (The initial rate of a reaction is the instantaneous rate determined just after the reaction begins, ie  just after time = 0.)

Thus, the above rate law may be replaced by initial rate = ck, where c is a constant.

The variation of reaction rate with temperature is given by the Arrhenius equation, which in its integrated form is:

where A is a constant, the frequency factor, Ea is the activation energy, R is the universal gas constant (8.314 J mol-1K-1), and T  is the absolute temperature. Since initial rate = ck, the initial rate can be found by:

Thus, we can plot log (initial rate) against 1/T  to obtain a straight line. The slope is multiplied by -2.303R to get Ea. The rates can be expressed in volume of oxygen per second or in arbitrary units because the slope of the straight line will not be affected.

The initial students' plans revealed misconceptions that they had about their challenge:

After doing several pilot experiments, students finalised their procedures for measuring the rate of the catalase-catalysed reaction. Box 2 shows an example of the experimental procedure written by a group of students. They plotted the volume of oxygen evolved (cm3) per second at the different temperatures, and calculated initial rates from the slopes of the straight lines drawn through the data points. Students used the Excel program to draw the straight lines on the plots. Although they used a crude sample of lettuce catalase and collected oxygen over water, the points in the Arrhenius plot (log (initial rate) versus 1/T × 103) lay satisfactorily on a straight line (R2 = 0.94). They found that the activation energy for the catalase-catalysed reaction is 19 kJ mol-1. (A reported value from the literature is 18kJ mol-1.)3  Note that teachers should be wary of comparing their students' results with the literature values because different sources of catalase affect the Ea values. For this catalase investigation, the Ea values obtained by students were 15-20 kJ mol-1.

The students used the same experimental set-up (Fig 1) to measure the rate of the iodide-catalysed reaction, but they put 5 cm3 of 0.1 M potassium iodide into the weighing bottle and 20 cm3 of 0.22 M hydrogen peroxide into the conical flask. They did five experiments, at five different temperatures over the range 31-50°C, to calculate the initial rates. The students drew the straight lines based on the data points below 6 cm3 of oxygen. They found that the activation energy is 55 kJ mol-1 (R2 = 0.97), which is in good agreement with the literature value of 56 kJ mol-1.4 Again, the methods used by the students often give approximate Ea values only, ranging from 54-58 kJ mol-1.

The rates of the iodide-catalysed and catalase-catalysed decomposition of hydrogen peroxide can be compared with that of the uncatalysed reaction. The relative rates are shown in Table 1. Lowering the activation energy from 75 to 55 kJ mol-1 increases the rate by a factor of 103, but catalase is even more efficient than iodide by a factor of 106.

Although the experimental procedure shown in Box 2 is crude, students can get consistent results if they keep the following points in mind:

The kinetics of the catalase-catalysed decomposition of hydrogen peroxide is complicated and abnormal. Catalase is a redox enzyme responsible for the disproportionation reaction: 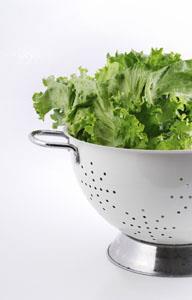 Catalase activity is particularly high in our liver, kidney and red blood cells. At temperatures higher than 40°C, the molecular and atomic motion disrupts the coiled globular structure of catalase, thus reducing its catalytic activity. The enzyme is said to be denatured. Catalase can also be inactivated by low-frequency ultrasound. Reseachers report that the activation energy for the thermal inactivation of beef liver catalase is 185 kJ mol-1 while the activation energy for the ultrasound inactivation of beef liver catalase is just 82 kJ mol-1 within the temperature range from 36- 55°C.7 This implies that ultrasound can denature catalase more efficiently than heat.

The catalase protein consists of four subunits. The active component of each subunit is a ferriproto-porphyrin group which is responsible for the disproportionation reaction. Researchers have discovered that an enzyme-substrate complex is involved, but the mechanism of the disproportionation reaction is still not fully understood.8,9 The enzymatic reaction is thought to comprise two steps:

Catalase is a very efficient catalyst. Each molecule of catalase can convert 4 × 107 H2O2 molecules to products per second under optimal conditions.10 In enzymatic reactions, the rate-determining step is normally the cleavage of the enzyme-substrate complex into enzyme and products. However, catalase shows abnormal kinetics - both steps are rate-determining. Consequently, the measured activation energy in this investigation is actually the resultant of the effects of temperature on two rate-determining processes instead of one.

Dr Derek Cheung is associate professor in the department of curriculum and instruction at The Chinese University of Hong Kong, Shatin, Hong Kong (e-mail: spcheung@cuhk.edu.hk).

I would like to thank the Quality Education Fund for financial support of this project (grant code 2003/0750).