Carbon sequestration - the removal of carbon dioxide from the atmosphere - is an active area of research. Deep-ocean burial is one method being considered. Another is the enhancement of marine photosynthesis by seeding the oceans with iron.

Few people are aware that atleast 50 per cent of the photosynthetic activity on Earth occurs in the oceans, even though marine phytoplankton make up only about one per cent of the biomass. Fig1 shows the land (deep green) and sea areas (deep blue) which contribute most to photosynthesis. 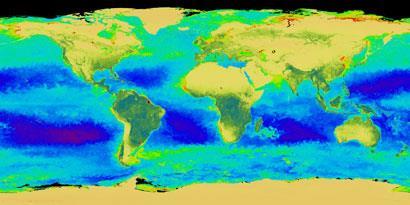 In the 1930s the English biologist, Joseph Hart, suggested that the ocean's 'desolate zones' of plankton were the result of an iron deficiency.2 However, Hart took the matter no further. 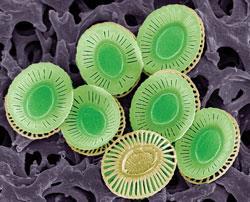 Phytoplankton for our future...

Later in the 1980s American oceanographer, John Martin, reignited the issue. Martin had been studying trace metal concentrations in the oceans. At a scientific meeting in 1986, other speakers had reiterated the 'conventional' explanation that the lack of phytoplankton in parts of the ocean was a result of the phytoplankton being eaten by zooplankton. Martin contested this view. He had found low iron concentrations in three of the poor-productivity regions: the Antarctic Ocean, the equatorial Pacific Ocean, and the Gulf of Alaska. He concluded that it was a lack of iron that inhibited plankton growth. 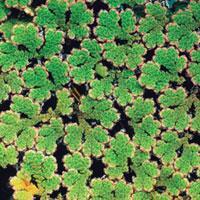 Did the aquatic fern cool the planet?

In 1991, during a visit to Woods Hole Oceanographic Institution, Woods Hole, Massachusetts, US, Martin went further, saying: 'give me half a tanker of iron and I will give you another ice age'. This remark was, in part, a reference to the Azolla event which had occurred in the middle Eocene period, about 49 million years ago. At the beginning of the event, the Arctic Ocean had a mean temperature of about +13°C and by the end, -9°C. The massive drop in temperature is ascribed to a significant and rapid reduction of carbon dioxide in the atmosphere from 3500 ppm to 650 ppm. One of the best explanations for the absorption of such enormous quantities of carbon dioxide was a massive bloom of the rapidly growing aquatic fern Azolla  in the then-surface freshwater layer of the Ocean. Martin reasoned that fertilising the low-productivity oceans could result in phytoplankton absorbing very large quantities of the greenhouse gas.

To test his 'iron hypothesis', Martin sent three laboratory technicians on a research expedition to the Antarctic Ocean. The technicians collected samples of seawater, added iron to some and not to others and placed the containers in sunlight. Only those samples to which iron had been added resulted in massive phytoplankton production.

Traditionally, oceanographers believed that only three nutrients were essential for phytoplankton growth - carbon, nitrogen, and phosphorus. They established the mole ratio needed for optimum growth - the Redfield ratio - as 106 carbon: 16 nitrogen: 1 phosphorus.3 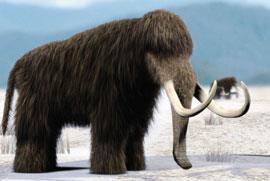 Could iron seeding really lead to another ice age?

However, to biochemists, Martin's finding would have come as no surprise. Iron is essential for electron transfer in many metabolic reactions. This metal is particularly suited to its redox role because it can cycle between iron(ii) and iron(iii) as a one-electron transfer agent.

In 1962 the first pure sample of an iron-sulfur protein of this type was isolated. The generic name of these proteins is ferredoxins, from ferrum, the Latin for iron, plus 'redox' (to give fer-redox-in). Plants contain a particular type of ferredoxin, a 'chloroplast-type' or 'plant-type'. The core of this protein is a Fe2 S2 cluster, bonded tetrahedrally to four cysteine amino acids, see structure (1).

The energy is then used to convert adenosine diphosphate to adenosine triphosphate in the photosynthetic cycle (Fig 2). The involvement of iron has now become widely recognised and the revised Redfield ratio is: 106 carbon: 16 nitrogen: 1 phosphorus: 0.001 iron. 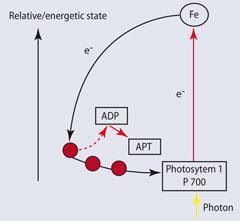 Figure 2 - Schematic of the photosynthetic pathway involving the ferredoxin protein

The current interest in the role of iron in phytoplankton productivity is as a means of carbon sequestration. Commercial companies are looking towards large-scale seeding as a means of generating carbon credits which can then be sold at a large profit to carbon dioxide producing companies.

To understand the way in which carbon is removed from the atmosphere, we need to look at the marine carbon cycle (Fig 3). The CO2 that enters the top layer of the ocean from the atmosphere dissolves rapidly and is chemically distributed among the three components that make up dissolved inorganic carbon (DIC) - aqueous carbon dioxide, hydrogen carbonate ions, and carbonate ions. 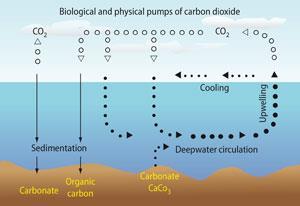 When carbon dioxide is taken up by phytoplankton, it is mostly utilised in photosynthesis. However, some is used to form calcium carbonate skeletons and this is particulate inorganic carbon (PIC).

Phytoplankton are eaten by zooplankton, which excrete dissolved organic carbon (DOC) and respire organic carbon back to dissolved inorganic carbon. When marine organisms die, their carbon skeletons (PIC) and some organic components descend into the depths as 'marine snow', becoming buried as sediments. Some of the carbon, however, as DOC, is swept into the deep water circulation systems where it remains for a 102-103-year timescale. Carbon settling to the sea floor is removed from atmospheric circulation, but carbon trapped in deep ocean currents as DOC can also be considered as sequestered. 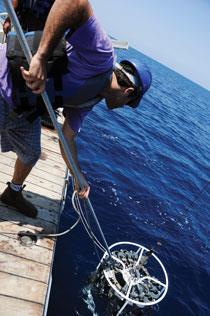 Unfortunately, Martin did not live to see the larger-scale international experimental trials of his iron hypothesis. To date, there have been nine fertilisation experiments, starting from 1993 and the Ironex I experiment through to 2009 and the LOHAFEX experiment. All experiments showed a significant increase in phytoplankton production.5  However, there was a wide variation in the results.

The most recent experiment (LOHAFEX) involved research institutions from seven countries, led by Germany and India and part financed by Planktos Science. The expedition was mired in controversy from its inception because both the International Maritime Organisation and the United Nations Convention on Biological Diversity had recommended that limits be placed on such experiments owing to their potential negative effects on ecosystems. Although the expedition had been approved by the German Ministry of Education and Research (but not by the German Ministry of the Environment), many environmentalists contended that the experiment violated the recommendations. The Antarctic and Southern Ocean Coalition (ASOC), for example, contended that any such planned experiments should be first approved by an international decision-making process. In addition, ASOC is opposed to any large-scale ocean seeding which would lead to commercial gain.

In the experiment, which was done in early 2009, scientists fertilised an area of 300 km2 with two seedings of 10 tonnes of iron(ii) sulfate solution to give an approximate surface concentration of 2 nmol l-1. As Martin had predicted and previous experiments had shown, there was a massive phytoplankton bloom. However, the type of phytoplankton that flourished were those without shells. As a result, the plankton bloom was rapidly consumed by zooplankton (crustaceans). Most of the carbon therefore would not descend to the depths but instead be recycled in the surface waters. 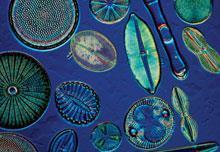 Previous iron fertilisation experiments in other ocean locations had produced diatoms. Diatoms have silicate structures which protect them from predators and these would contribute to long-term carbon sequestration. Thus ocean chemistry and biochemistry are more complex than initially anticipated and significant silicate concentrations are required for carbon sequestration. The differences in results between sequestration experiments suggests that several, maybe many, factors are involved in enhancing ocean productivity by iron seeding.

Martin's prediction that iron fertilisation would cause ocean 'deserts' to bloom was true. Two expeditions, IronEx II and EisenEx, in particular found very high levels of carbon dioxide absorption. Clearly though, more research needs to be done to understand the various marine ecosystems and the effect of added iron on each one. For example, none of the trails to date have monitored the fertilised region for an extended period of time. Also, experiments have all been on the small scale, and it cannot be assumed that larger-scale fertilisation would give, in proportion, the same type of results.

There are some specific concerns. One of these is that certain types of phytoplankton respire dimethyl sulfide, a gas which escapes into the atmosphere where it is oxidised to the sulfate ion. The airborne sodium sulfate particles can act as seeds for cloud formation, altering the reflectivity (albedo) of incident sunlight and resulting in a cooling effect.

Other types of phytoplankton produce toxins - in particular the dinoflagellates of the 'red tide' blooms in some coastal regions. Ingestion of these specific organisms leads to death among aquatic species - and to any humans who eat shellfish which have absorbed the toxin. 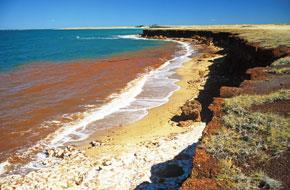 Some scientists are also concerned that the descent of large quantities of dead phytoplankton into the depths could cause the deep oceans to become oxygen-depleted (anoxic) and hence deep-ocean species would die. On the other hand, there have been some enormous naturally occurring large blooms and these do not seem to have caused any serious damage to the ecosystem.

In the end, it comes to a choice of priorities. Which will be worse for the planet (and for us) - the effects of growing carbon dioxide concentrations in the atmosphere or any downside of carbon sequestration. Of all the proposed methods of carbon sequestration, iron ocean seeding seems to be the most feasible. To sequester three gigatonnes of carbon dioxide per year would require about 2 ×105 tonnes of iron per year based on the most optimistic results and about 4 ×106 tonnes on the most pessimistic estimate.3 The latter only represents about 16 supertanker loads of iron per year. The question, then, has moved from the realm of science to that of politics. Should large-scale iron seeding be permitted? Who would regulate it? Who would benefit from the carbon-capture profits? If it is to be private corporations, to whom would they be answerable? With the possibility of enormous profits, it is important that governments attempt to develop enforceable rules before it is too late.

When seeding the ocean, it is important to understand some iron chemistry. In seeding experiments, iron(ii) ion in the form of iron(ii) sulfate solution is usually applied. The most stable species of iron depends upon the pH and the potential, Eh, (reducing or oxidising) of the aqueous environment. A Pourbaix diagram can be used to identify in general terms which species would be preferentially stable under various Eh/pH combinations. Figure 4  shows a simplified diagram for iron species in aqueous solution at a concentration of 1 mol l-1 and we can see that it is the FeO(OH)(s) species that is favoured in pure water at a typical ocean pH of 8.1 and the oxidising conditions of surface ocean water. Thus the applied iron(ii) ion solution will be oxidised to iron(iii) species. 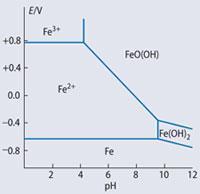 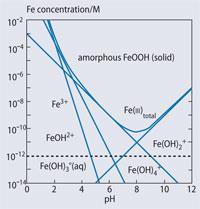 Figure 5 - The pH and concentration dependence of iron species

Although FeO(OH) is insoluble under those conditions, it is in equilibrium with soluble ions and these soluble species become more dominant as the concentration is decreased (see Fig5).6  In particular, the Fe(OH)2+( aq ) ion becomes important. Although the ion is conventionally written as Fe(OH)2+ for simplicity, it is actually a hexacoordinate iron(iii) ion, [Fe(OH)2(OH2)4]+. In addition to the 'free' iron, there is a significant proportion of solubilised iron in the form of complexes, particularly those of tetrapyrrole (porphyrin) ligands (see structure) which are widely distributed in the oceans. Some oceanographers contend that it is the complexed iron which is more easily absorbed into the surface cells of the phytoplankton.