Lending a hand with sanitiser

When one of the key weapons in the fight against Covid-19 was in short supply, some unlikely manufacturers stepped in 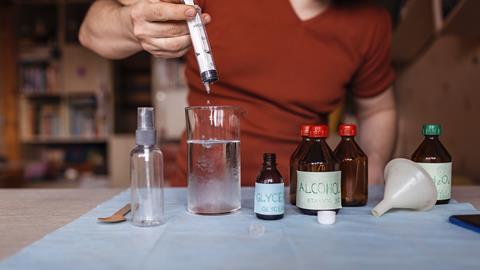 When a new strain of coronavirus was discovered in Wuhan, China in early 2020, few people could have predicted how quickly it would affect our society and economy. As Covid-19 spread around the globe, one of the first noticeable changes in UK day-to-day living was the availability of common items in shops. Items like pasta, flour and even toilet rolls were soon completely missing from supermarket shelves.

One item sold out because it became a household essential overnight: hand sanitiser. Good hygiene has been key in the fight against Covid-19. While soap and water are the materials of choice for handwashing, an alcohol-based hand sanitiser is a great alternative when bathroom facilities aren’t available. And when everyone wants a bottle for their handbag or coat pocket, demand is bound to outstrip supply.

On the return to school for the majority of students in the autumn term, hand sanitiser will become a back-to-school essential. This article describes how this simple mixture is formed and the factors that chemists had to take into consideration when they decided to temporarily manufacture hand sanitiser on a large scale.

We teach extensively about how to separate mixtures. Hand sanitiser provides an excellent context on which to pin discussions about the importance of the reverse process – mixing formulations – in our everyday lives.

Soap and alcohol kill Sars-Cov-2 (the virus that causes Covid-19) in exactly the same way. They disrupt the lipid bilayer that forms a protective coat around the virus’s RNA (and gives it its distinctive crown-like or ‘corona’ shape). Once this RNA is exposed, it’s broken down and the virus is rendered inert. For soap to work effectively it needs to be applied for at least 20 seconds. Hand sanitisers based on ethanol or isopropyl alcohol (IPA) work a little quicker, so long as you don’t skimp: to be effective against Sars-Cov-2, hand gels need to be at least 60% alcohol, preferably more.

To address the hand sanitiser shortage, organisations that usually have nothing to do with healthcare began to manufacture it. Thanks to two simple formulations published by the World Health Organisation (WHO) – one that uses ethanol and another that uses IPA – anyone with a background in organic chemistry or flammable solvents could make an effective hand sanitiser easily. It was what frontline workers were crying out for.

One such organisation was Bristol University’s school of chemistry, where one professor, Tim Gallagher, turned his attention away from synthetic organic chemistry to spearhead a programme of hand sanitiser manufacture. ‘There was concern from local hospitals, schools and care homes that they wouldn’t be able to keep people safe,’ he says. ‘My colleague Adam Perriman and I realised we were in a position to do something about that.’

These recipes are designed to be as simple as possible, so they can be made anywhere – from a university lab to a rural village

Tim and Adam began to make small batches of the WHO’s IPA recipe at home over a weekend, which they tested on their families and neighbours. ‘In addition to IPA, all that’s needed is a small amount of hydrogen peroxide to kill bacteria, some glycerol to stop your skin drying out, and some water. It’s more like mixing cocktails than chemistry,’ Tim says. ‘Both IPA and ethanol formulations use 70% alcohol – more than enough to kill the Sars-Cov-2 virus.’

While the technical side of making hand sanitiser was simple, the team would face other challenges in the form of regulation and red tape. Ethanol is a controlled substance because of its use in the drinks industry. In the UK, Her Majesty’s Revenue and Customs (HMRC) collects tax and duty on its sale and limits the availability of the high-purity ethanol needed to make hand sanitiser.

IPA, on the other hand, is not used for drinks (in fact, it’s toxic), but hand sanitisers made using this recipe are classed as biocides and as such need to be given the green light by another organisation – the UK Health and Safety Executive (HSE).

Download a comprehension exercise based on this article as MS Word or pdf. Use the exercise to help students develop their understanding of the text and to apply their numeracy skills to discover the economic benefits small changes to a formulation can have. Also download the article text and answers (as MS Word or pdf).

A comprehension exercise to help students develop their understanding of the text and to apply their numeracy skills to discover the economic benefits small changes to a formulation can have from the Education in Chemistry website: rsc.li/xxxxxx

If you’re thinking that all this sounds a bit intimidating, you wouldn’t be on your own. ‘It was daunting,’ admits Tim. ‘I know of other groups that have taken one look at the regulatory hurdles and said, ‘no way!’ then given up immediately.’

But persistence pays off: ‘At the start it was easier to get permission from the HSE to make the IPA sanitiser, which is why we went down that route. HMRC took longer to get back to us but we got there in the end.

‘I should emphasise, however, that the people I spoke to at both HMRC and the HSE were all very helpful and could see what we were trying to do – a lot of really interesting people that were really invested in our idea,’ Tim says. ‘Getting permissions was undoubtedly easier because we were following the WHO’s formulations, which don’t contain anything fancy like fragrance or gels, some of which can cause allergic reactions. These recipes are designed to be as simple as possible, so they can be made anywhere – from a university lab to a rural village.’ 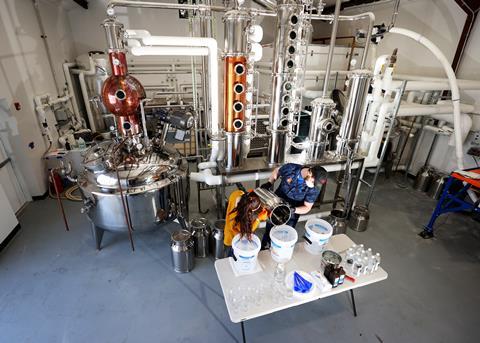 When shelves emptied of hand sanitiser, distilleries and universities stepped in to plug the gap

With their official permissions in place and their recipe working well, Tim turned his thoughts to scaling up. The team had been making 10 litres of sanitiser at once in a single batch process and buying IPA and ethanol in 2.5 litre bottles. Soon they realised they could get IPA in 1000 litre intermediate bulk containers (IBCs), but when it came to scaling up the batch process itself, Tim decided against it on safety grounds: ‘the problem is flammability. When we risk-assessed the scaled-up protocol we asked questions like ‘where can we handle such a large quantity of flammable solvent safely?’ There are also practical issues, like how to mix 100 litres at a time. A sparking mixer motor sitting right above a 100 litre tub of mostly alcohol is an accident waiting to happen.’

So, the team decided to keep things simple. ‘We had a 10 litre batch process that was working well – why change it?’ Tim explains. ‘We have about forty 10 litre containers with 7 litre marks on them. Two people pre-load each flask with IPA and bring them to our teaching labs where we add glycerol, peroxide and water. We put the lid on, give it a shake, and it’s done. Yes, it’s labour intensive, but we don’t have a shortage of labour right now. The system works well for us. One day we said: ‘let’s see how much we can do,’ and we went on to make 500 litres with two people in three hours. The slower step is bottling and labelling afterwards.’

The spirit is willing

Bristol University’s success at making hand sanitiser has been reproduced in other chemistry departments, but there’s another type of organisation that’s also well suited to the job. Distilleries are well used to working with large quantities of ethanol and have the experience of conforming to regulations too. No surprise, then, that some have turned their attention to hand sanitiser manufacture.

One of the first to do this is only just around the corner from Tim and Adam. Bristol-based Psychopomp usually specialise in limited-edition gin, but they soon saw that their talents could be put to other uses when news of the coronavirus broke.

‘It was the beginning of March when we first realised what might be about to happen,’ says Liam Hirt, director and founder of Psychopomp. ‘We hadn’t gone into lockdown yet, but I think other people saw it coming too because the supply of alcohol hand sanitiser just evaporated overnight. But quickly we realised we had the ingredients to make our own.’

Initial batches kept the staff at Psychopomp safe, as well as their friends and family. ‘We all have vulnerable people in our family, don’t we?’ says Liam. ‘We ended up giving away more and more sanitiser and eventually said that anyone could come into the distillery with a 100 ml bottle and take some home. We asked for a small donation for the children’s hospital, but otherwise it was free.’

This was not a sustainable business model, however. The legal requirement to pay duty on ethanol meant that it was costing Psychopomp more than £35 to make a litre of hand sanitiser with £28.70 of that going in alcohol duty alone. If Liam was to avoid bankrupting his company, he’d need to pursue the same tax-exemption route taken by Tim at the university.

‘We got in touch with the British Distillers Alliance, with HMRC and even with our local MP and started pushing for exemption, which we eventually received in April,’ Liam recalls. ‘That then made it very cheap to produce our sanitiser, bringing the cost down to less than £5 per litre.’

Now Psychopomp could produce lots of their sanitiser and put the word out. ‘One day we had the strange experience of seeing some fire engines pulling up at the distillery to refill their supplies,’ Liam says.

He continues: ‘Although the world has kind of caught up now, and suppliers are catching up with demand, we are still making a small amount for customers in the hospitality industry who we already supply with gin. And I guess if there is a second wave and we need to make it again then we can – we have that know-how.’

This last point is a crucial one. All over the UK, organisations like Psychopomp and Bristol University set out to fill a short-term gap in supply. Now that gap is closing, they can think about going back to their day jobs, but with more sectors of the economy opening up after lockdown (and the threat from other diseases, such as influenza, an ever-present danger) the ability of small groups of people to adapt and think on their feet in this way is – quite literally – a life saver. We may well need their services again.

Article by Ian Farrell, a freelance journalist and photographer from Cambridge. Resource by Catherine Smith, a secondary school teacher at Hinckley Academy and John Cleveland Sixth Form Centre, an 11–18 academy in Leicestershire