An understanding of the physical chemistry of ice cream is the route to a smooth, soft, creamy dessert 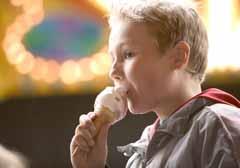 A taste of physical chemistry

Simply mixing cream, sugar and egg yolks, with a flavour such as fruit or chocolate, and putting them in the freezer won't give you ice cream. How these ingredients are processed will affect the texture of the product and this comes down to understanding the physical chemistry of ice cream.

Look at ice cream magnified several hundred times in a scanning electron microscope and you will see that it has a complex structure on length scales of 1 μm to 1 mm (Fig 1). There are ice crystals (ca 30 per cent by volume), air bubbles (50 per cent) and fat droplets (5 per cent) from the cream, held together by a viscous sugar solution (15 per cent). Ice cream thus contains all three states of matter simultaneously and is both a foam and an oil-in-water emulsion. The quality of ice cream depends on its microstructure: small ice crystals and air bubbles give the ice cream a smooth, soft texture. If the ice crystals are too large, the ice cream becomes gritty and unpleasant to eat. Creating this microstructure is the key to making good ice cream - and to understand how to do this, you need to know some physical chemistry. 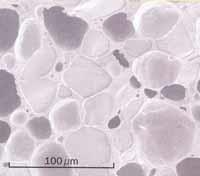 The first step is to know how much of each ingredient to use. lce cream typically contains ca 60 per cent ice by weight. Much more than this and the product would be too hard; much less it would be like custard and would not cool you down on a hot day. The amount of sugar (sucrose, C12H22O11) determines the amount of ice in the ice cream because this will affect the freezing point.

where Tw is the freezing point of pure water (273 K), Ts is the freezing point of the solution, R is the gas constant, ΔHf  is the latent heat of fusion of water (6.01 kJ mol-I) and x  is the mole fraction of solute. (The related observation that the vapour pressure of a solvent above a solution is proportional to the mole fraction of the solvent in solution is Raoult's Law.) Most solutions obey this equation when the solute concentration is low, but may diverge from it at high concentrations.

Making use of the freezing point curve 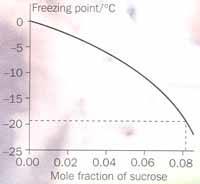 Ice cream scientists use the freezing point curve when formulating ice cream recipes. Suppose, for example, they want to make 1 kg of ice cream that contains 50 per cent ice by weight at a normal freezer temperature of -18°C. How much sucrose should they use? From the curve, the sucrose mole fraction in equilibrium with ice at -18°C is 0.083 or 63 per cent w/w, ie:

The total mass is 1 kg, and 50 per cent of this will be ice, so the remainder, must be sucrose and unfrozen water.

Solving these two equations gives Msucrose = 320 g. In practice, they also have to allow for other solutes, eg  from milk, when formulating ice cream recipes. 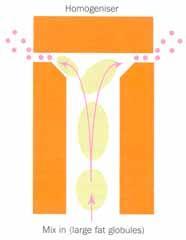 At the factory, the ingredients are first blended in the correct quantities and this mix is pasteurised to kill any harmful microorganisms. Initially, the fat is present as coarse globules. The mix is homogenised by forcing it through a small hole under high pressure (Fig 3 (a)).  This breaks the fat globules up into an emulsion of much smaller droplets (<1μm) with a much larger surface area. To keep the fat droplets small the emulsion must be stabilised with a surfactant (see Box 1). There are two types of surfactant in ice cream: milk proteins (eg casein) and emulsifiers (eg  mono-diglycerides or lecithin from egg yolks or soy beans). These adsorb to the surface of the homogenised fat droplets and stabilise the emulsion (Fig 3 (b)). The mix is then cooled to ca 5°C, below the melting point of the fat, which begins to crystallise. 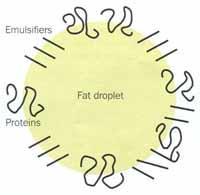 Thus one component of the microstructure - the fat droplets - has been created. In the next stage the mix is converted into ice cream by aerating and freezing it.

Legend has it that making ice cream by simultaneously freezing and aerating cream originated when Mongolian horsemen took animal intestines filled with cream to eat on journeys across the Gobi desert in winter. As they galloped the cream was vigorously shaken, while at the same time the sub-zero temperatures froze it, creating ice cream.

Modern ice cream freezers are less exotic. They consist of a refrigerated barrel, with a rotating dasher inside, which is equipped with scraper blades. Ice cream mix at ca 4°C is pumped into the barrel. Air is injected, forming large bubbles, which are broken down into many smaller ones by the beating of the dasher. The fat droplets and milk proteins adsorb onto the surface of the air bubbles and stabilise them, in the same way that the milk protein and emulsifiers stabilise the fat droplets. Since the fat droplets are partially crystalline, they form a strong, rigid coating, which prevents collapse of the air bubbles.

The barrel wall is cooled to ca -30°C, so that when the mix touches it, ice forms instantly, and heat is rapidly extracted from the ice cream mix (see Box 2). The ice is rapidly scraped off the barrel wall by the rotating scraper blades, and is dispersed into the mix as small crystals. As the ice cream passes through the freezer, its temperature drops, more ice is formed, and the viscosity of the ice cream increases. There are two reasons for this increase in viscosity. 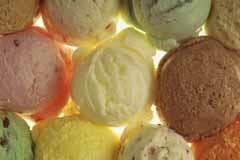 We have already seen that dispersions of one phase in another are unstable and have a tendency to lower their energy by forming fewer, larger particles. In emulsions this usually occurs by the coalescence of two drops. However, when the dispersed phase is soluble in the continuous phase, another mecha?nism operates. This is known as Ostwald ripening, discovered by Wilhelm Ostwald, who won the 1909 Nobel Prize in chemistry for this work. The solubility of a particle in?creases as the particle gets smaller, ie  small particles are more likely to dissolve than large ones. The solubility of a particle of radius r, s(r)  is given by:

where V  is the molar volume and s (∞) is the solubility of an infinitely large particle. This is known as the Gibbs-Thomson equation. (William Thomson, later Lord Kelvin, is best known for proposing the absolute scale of temperature.)

When you take ice cream out of a supermarket freezer its temperature may rise by a few degrees during your journey home, so that some of the ice melts. Crystals that are initially large become smaller, and those that are initially small disappear completely. When you put the ice cream in your freezer at home, it is cooled down again, and the ice that had melted freezes again (Fig  4). However, the ice cannot form on the crystals that have disap?peared. Instead it freezes on the crystals that have survived. The net effect is that the total number of crystals is reduced, and their mean size increases, while the total amount of ice is unchanged. If the temperature fluctuation is too big, the ice crystals become very large (> ~100 μm),  producing an icy, gritty texture.

So having created and preserved the microstructure, the ice cream finally reaches the consumer in perfect condition. The next time you eat ice cream, think of Raoult, Gibbs, Newton, Kelvin and Ostwald - and all the physical chemistry that has gone into making it!

If oil and an aqueous solution are vigorously mixed together (eg  to make a salad dressing), the oil is dispersed to form an emulsion of a large number (n) of small droplets with a total volume Voil. The emulsion has a very large oil-water interface area (A),  which increases as the droplet radius (r) gets smaller.

The energy of the interface is given by:

where γ is the interface tension. Therefore increasing the interfacial area costs energy, which means that the emulsion is unstable. The emulsion can reduce its free energy by reducing its interface area, eg by droplets coalescing. Thus, after a few minutes, the emulsion will separate into a layer of oil over a layer of water.

Emulsifiers are surfactant molecules, ie they consist of a hydrophilic (water-loving) head group and a hydrophobic (water-hating) tail. The hydrophilic part of the molecule is attracted to the water and the hydrophobic part is attracted to the oil. The only way to satisfy both parts of the molecule simultaneously is for the emulsifier to be located at an oil-water interface.

Surfactants lower the interfacial tension: the more surfactant molecules per unit area of the interface (Γ), the greater the decrease. This is described by the Gibbs adsorption isotherm, named after J. Willard Gibbs (1839-1903), one of the founders of modem thermodynamics and statistical mechanics,

T  is the absolute temperature and c is the concentration of surfactant molecules in solution.

As well as discovering the laws of motion and gravity, Isaac Newton gave his name to the law which states that the rate of change of temperature of an object, eg ice cream, is proportional to the difference be?tween its temperature (T ice cream) and the temperature of the refrigerant, (T r)

Thus the colder the refrigerant, the faster the ice cream is cooled down. Ice cream making in the 19th century was a slow process. The best refrigerant available was a eutectic mixture of ice and salt (sodium chloride), which has a minimum temperature of -21.1°C. Today, colder refrigerants are available. Ice cream factories typically use liquid ammonia at -30°C and ice cream making is much faster. In fact, the world record for the fastest ice cream ever made used liquid nitrogen at -196°C.1

This book is ideal for undergraduate food science students as well as for people working in the ice cream industry.