Making the most of starch

Starch represents an enormous and sustainable source of renewable carbon, yet its non-food applications are largely trivial and of low value. With some clever chemistry we can do so much more with it.

One of the great challenges that we face in the 21st century is to build up new manufacturing industries based on renewable resources.1 Traditional organic chemicals, materials and pharmaceutical companies rely on fossil resources, notably petrochemicals, from which they make the products that go into such everyday substances as fabrics, dyes, packaging, drugs, construction materials and electronic goods. But fossil resources are finite, and oil - the source of petrochemicals - will become increasingly scarce as the century progresses. Biomass - in the form of starch - represents a real long-term solution. 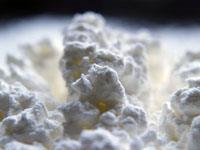 Nature produces about 170,000 million tonnes per annum of renewable carbon as 'biomass', though we only harvest about 3 per cent of this for food and non-food applications.2 Less than 1 per cent of this would be sufficient to meet the foreseeable demands of the chemicals and related industries that currently consume fossil carbon.3 The challenge for us will be to convert the complex chemical structures that Nature produces into the chemical structures that we need.

Starch is one of Nature's three biggest products, the other two being cellulose and chitin. All three are all rich in carbon but this carbon is trapped in macromolecular networks. We can break these large molecules down into the smaller molecules more commonly encountered in organic chemistry - ethanol (with huge potential as a biofuel), lactic acid, succinic acid etc. My research group, however, at the University of York is currently investigating whether we can make more use of these natural polymers as they are. We produce enormous quantities of synthetic polymers from petrochemicals every year, including polyethene, polystyrene (poly(phenylethene)), and polymethylmethacrylate (poly(methyl 2-methylpropenoate)). We also consume huge amounts of other macromolecules, for example silica, in energy-demanding, resource-demanding and wasteful processes. So can the chemical industry use Nature's renewable organic macromolecules, in particular starch, for some of its applications, and perhaps some new applications?

Major starch sources include potatoes, corn, rice and wheat. Starch is a combination of two polymeric carbohydrates (polysaccharides) - amylose (1), a linear structure, and amylopectin (2), a branched structure. The relative amounts of these polymers varies between species with high amylose cornstarch, for example, having about 85 per cent amylose while waxy cornstarch comprises 99 per cent amylopectin. 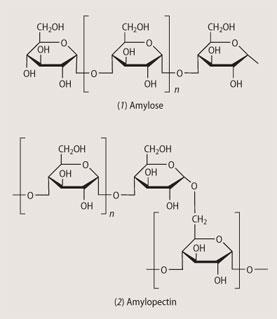 While starch is used predominantly for food, it is also used as a thickening agent, as an adhesive - the glue on the back of stamps - as a stabiliser, and as a binder. Starch is also often used as a carrier for drugs and as a viscosity modifier in paints. From the chemists' point of view starch has many appealing properties - it is abundant and sustainable, non-hazardous, and biodegradable - properties that are becoming increasingly important in these environmentally-conscious and sustainability-driven days. Furthermore, legislation affecting chemicals is increasing at an exponential rate and the use of hazardous substances is becoming increasingly difficult and restricted. Starch also has potentially useful functionality, notably hydroxyl groups to assist adsorption and chemical modification. So why can't starch be used in more applications, including more sophisticated, higher value applications?

The main problem lies in its low surface area (<1 m2 g-1), limiting the accessibility of the functional groups. This means that native starch cannot compete with silica gels, for example, which are also rich in hydroxyl groups but which have very high surface areas (>100 m2 g-1), and are used as catalyst supports, separation media, trapping and in composite materials. Faced with this challenge, we set out to open up and reorganise the polymeric carbohydrates in starch into a structural form that has a much higher surface area.

On heating in water, starch forms a gel. This gelatinisation process opens up the complex interwoven structure of the native material - the hydroxyl groups make the polymer chains susceptible to hydrogen bonding, and there is nothing better at hydrogen bonding than water. Simply drying the gel, however, doesn't increase the surface area. However, if the gel is kept at a low temperature, typically 5°C, for several days, a process of retrogradation occurs, creating a gel network.

Our next challenge was to remove the water from the gel without collapsing the pores. This was done by washing it with a solvent that is miscible with water, but has a lower surface tension. Ethanol proved to be a good choice - washing with ethanol allowed us to remove the water without collapsing the pore structure. The solvent was easily recovered and could be reused.

We thus created a porous, high surface area (100 m2 g-1) form of starch - just by cooking and dehydration. No chemical change occurred and though energy is consumed in the process, this can be minimised, for example, by using microwave heating. The raw material - cornstarch, wheatstarch, peastarch etc - can be transformed into a powdered product or a remarkably low density (ca 0.25 g cm- 3) but quite robust block of material.

Like most high surface area materials, the surface of the expanded starch is largely inside the pores. The pore volume of ordinary starch is so small that it can't be measured by normal methods, but once expanded it is >0.5 cm3 g-1 comparable to the 0.7 cm3 g-1 of typical chromatography silica gels. The average pore size of expanded starch is similar to that of commercial silicas, typically ca 8 nm (6-10 nm for typical silicas). The surface energy of the expanded starch, which affects the adsorption properties of the material, is lower than that of silicas.4 This suggests that expanded starch should be able to adsorb useful quantities of substances, including very large molecules, and adsorb less strongly than silica in some cases. The material should therefore be useful for adsorbing (but also subsequently release when required) hazardous compounds in effluent treatment. Further research confirmed that our expanded starch adsorbs halogenated compounds, metallic compounds, aromatic compounds and many others.

The strongly adsorbing properties of our expanded starch have already led to other more constructive applications.

Chromatography is one of the most important methods for separating molecules of different polarities and/or different sizes. Silica gel is the most widely used chromatographic stationary phase on which separations occur; it has a very high surface area and pore volume, excellent adsorption capacity and strength largely controlled by its surface hydrogen bonding ability (it is rich in surface hydroxyl groups). However, while silica is a totally sustainable material, the preparation of silica gels is resource- and energy-intensive, and its strong adsorption properties mean that large quantities of often polar and/or hazardous organic solvents are required to desorb the compounds that are being separated. Overall, the use of silica gel in chromatography is not an environmentally benign process.

We have found that expanded starch is an excellent stationary phase for separating many chemical mixtures. Furthermore, it generally requires smaller quantities of less polar solvents to elute the individual compounds from the mixture. For example, we were able to use expanded starch to separate a mixture of three ferrocenes - ferrocene, acetylferrocene and diacetylferrocene (see Fig 1). On a silica column, the ferrocenes are so well bound that a simple alkane such as hexane removes nothing. More polar solvents (and more solvent) are needed. We have also used flash chromatography to separate the ferrocene compounds. Here we used a vacuum or pump to force the solvent 'mobile phase' through the column of stationary phase very quickly. The mixture of ferrocenes can be separated over a 22 cm x 1 cm dry packed expanded starch column. 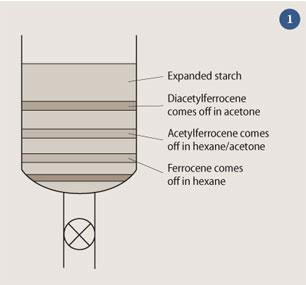 Another important use for porous solids is as catalyst supports. From an environmental standpoint heterogeneous catalysts are preferable to homogeneous ones since the former are much easier to recover (and subsequently reuse) at the end of a reaction. Homogeneous catalysts can be lost in the work-up stage to separate the desired product, and lead to hazardous waste as well as loss of what is often the most expensive component of a reaction. Thus, the heterogenisation of catalytically active species, both inorganic and organic, is currently a popular approach to waste minimisation and resource efficiency.

We have found that expanded starch can be modified with various different and useful functional groups and used for this purpose. The high concentration of OH groups on the surface of the material makes derivitisation relatively easy. Some of the catalytically useful expanded cornstarch surfaces that we have prepared and tested are shown in Fig 2 (L = linker groups; G = other groups). We have done numerous organic reactions with these chemically-modified expanded starches as catalysts. Generally, the results are as good as those using the equivalent silica-based catalysts.5,6 The starches are also recoverable and reusable, and in the environment, they are rapidly biodegradable. 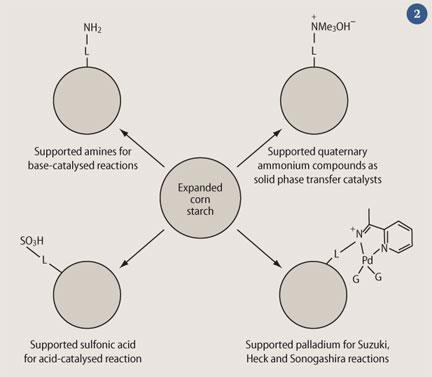 We have also found that we can make organic polymers in the presence of expanded starch, for example by polymerising styrene (phenylethene) units bonded to the starch. This opens the door to starch-polymer composite materials that could be fine-tuned to give properties to suit different applications. Even without a co-polymer, expanded starch can be turned into plastic-like materials, with all sorts of exciting possible uses. Ordinary starch is used in some packaging - it is cheap, biodegradable and food compatible; expanded starch should be better in many ways including easier processing.

We have also found that when porous starch is heated, porous carbon is the result.7 Adding a little acid catalyses the process, so that we can carbonise expanded starch at not much above 100°C. We have nicknamed the carbonaceous materials we make 'Starbons' - they are mesoporous and have adjustable surface properties, depending on the temperature at which they are made. They have many applications - as conducting materials, in advanced composite materials, to trap molecules, in water treatment, and as catalysts.

Can we expand any other of Nature's polymers? The answer is 'yes'. For example, we have recently expanded cellulose to give a material with greatly enhanced surface area compared with the natural material. There is now the real possibility that we can begin to make much better use of these abundant and totally renewable materials with which Nature enriches our planet every day. By manipulating these materials in terms of porosity, surface area, surface structure and composition, the possibilities are endless and sustainable.

The surface area of a material is commonly measured by adsorbing a single molecular layer of a gas such as N2. Thus we really measure the surface area available to the 'probe' molecule.

A material such as a common laboratory grade silica gel has a surface area of several hundreds of square metres per gram. The area includes the (visible) external surface of the particles and the (invisible) internal surface of the pores in the material. High surface areas are normally associated with more porous solids with often ~ 80 per cent of the area being internal. The accessibility of the internal surface is controlled by pore size (which can range from less than 1 nm to about 100 nm).

Aims to promote awareness and facilitate education, training and practice of green chemistry in industry, commerce, academia and schools