The past 10 years have witnessed myriad R&D programmes in nanotechnology around the world. Nanoscale innovations are now among us in everyday products, in computers, medicine and even DIY applications

Almost 50 years ago Richard Feynman told of the enormous potential of physics and chemistry done at the nanoscale in his now famous lecture, There is plenty of room at the bottom. While nanotechnology remained in the realms of theory and speculation for some 20 years following his speech, within the past 10 years real applications have been coming onto the market and it is evident that there is still plenty more to come from the 'room at the bottom'. 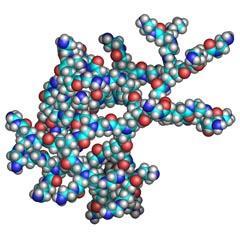 The latest cordless drills, which run on 36 V batteries, are the result of advances in power tool construction made possible by the work by material scientist Yet-Ming Chiang and his team at Massachusetts Institute of Technology (MIT). Five years ago the MIT researchers showed that doped nanoscale crystals of lithium iron phosphate could conduct electricity, and they proposed to use them as battery electrodes.1

Conventional materials used as battery electrodes come as micron-sized particles. Miniaturising the particles further would increase the efficiency, but also improve the thermal conductivity of the electrodes which could make them unsafe. The advantage of Chiang's material is that it is sufficiently stable to be used at a particle size of only a few nanometres. Chiang co-founded the company A123, which soon struck a deal with the power tool manufacturer Black & Decker, with the result that nano-based power tools became available in the shops in 2006, just four years after publication of Chiang's paper.

Other household items that can already or will soon contain nanoparticles include paints and coatings. Measures to improve the efficiency of paints in preventing corrosion, keeping surfaces clean, or even keeping them sterile, have been developed by formulating coatings with specifically designed nanoparticles. Degussa, for example, has developed acrylic-based paints that comprise siloxane encapsulated nanoparticles. The paints are solvent free and according to the manufacturers give a scratch resistant coating that can be used on parquet floors, paper, metal and plastics.

Medicine has been one of the most promising fields for applications of nanotechnology. Since life's functional unit, the cell, operates on the nanoscale, therapeutic interventions should in theory be targeted at cells with nanoscale precision. Specific interactions with the targeted cell type should ensure that side effects arising from interactions with other types of cells can be avoided.

This reasoning has led many researchers to develop nanoparticles for specific cells. For example, Erkki Ruoslathi's group at the University of California at Santa Barbara has recently created nanoparticles that form clots within the blood vessels of tumours. They hope that with further improvements these could be used either to starve tumours or to target them with cytotoxic drugs.

The researchers identified a simple linear peptide, consisting of only five amino acids (CREKA = cysteine, arginine, glutamic acid, lysine, alanine), with a strong preference to accumulate in tumour tissue, including the blood vessels. They coupled multiple copies of this peptide to nanoparticles that are already used in the clinic as MRI contrast agents, such as the amino dextran-coated, iron oxide (SPIO) nanoparticles, which have diameters of around 50 nm.

When the researchers tested their material in mice, they discovered that most is cleared via the liver rather than accumulating in the tumours. Since the peptide alone had not shown this problem, the researchers reasoned that this was caused by the nanoparticles. So they introduced a pre-treatment with 'decoy-nanoparticles' designed to saturate the uptake capacity of the liver before injecting the peptide-bearing particles.

In this way the researchers managed to target the peptide nanoparticles specifically to the blood vessels of the tumours, where they aggregated in a way that resembled the aggregation of platelets in blood clotting. They found that the particles not only bound to target sites in the tumour, but also to each other, so that the presence of initial deposits helped to speed up the deposition of more material.

In essence there are two ways in which nanoparticles might help cancer therapy: by blocking the blood supply or by acting as drug transporters. The Ruoslahti approach looks to be exploiting both mechanisms, thus working synergistically. As they increase tumour vessel obstruction, they also get more nanoparticles into the tumour, which means being able to deliver a larger drug payload.

A few nano-formulated medicines are available already. For example, the widely used anticancer agent taxol is on the market as nanoparticles under the name of Abraxane, and has reportedly fewer side effects than the original formulation. The Dublin-based company Elan Pharma has four nanoparticle products on the market - including one aimed at pain relief and an antibiotic. Their nanocrystal technology is mainly aimed at improving the bioavailability of drugs given orally. Other nanoparticle-based drugs are expected to reach the market within the next few years.

While the nanoparticles mentioned so far are generally made 'top down', ie by dividing larger particles, others can be made via a 'bottom up' approach. Dendrimers - branched polymers that grow like trees and achieve symmetrical yet complex shapes - are an example of the latter.

Chemists can tailor dendrimers to display certain surface properties and also to include cavities beneath the outer shell of the molecule. Dendrimers are therefore ideal candidates for drug delivery to specific sites. Indeed certain types of dendrimers serve as shuttles for drugs that are effective in vitro but fail to survive in the body if administered on their own.

Antony D'Emanuele and his group at the University of Central Lancashire have designed a prodrug by covalently coupling the model drug propanolol to a surface modified version of the commercially available polyaminoamine (PAMAM), a third generation dendrimer. (Prodrugs are drugs that are converted to the toxic drug only at the tumour site because of the presence of a specific compound or enzyme, or specific conditions.) The researchers have shown that the dendrimer succeeds in transporting the drug into living cells. More recently, the same group, by using a range of different dendrimers and imaging methods, has shown that the drug can be delivered to the cytoplasm by optimising the pH-dependent stability of the covalent bond between the dendrimer and the drug so that it becomes cleavable only when the prodrug has entered the cell.3

Meanwhile Jean Fréchet and Francis Szoka at the University of California at Berkeley and San Francisco, respectively, have developed a different approach based on molecules they have dubbed 'bow-tie dendrimers'. The latter consist of two different molecular trees attached to a core molecule. The researchers used one side of the bow tie to optimise the solubility of the construct, and the other to create suitable binding sites for the drug to be carried. Recently the researchers showed that mice with solid tumours which are normally resistant to the drug doxorubicin can be cured if the same drug is coupled to such a bow-tie dendrimer.4

Many other researchers are currently developing dendrimer-based medical applications. While the dendrimer molecule can be the carrier, or the drug itself, most of these applications are based on the idea that nanoscale particles can easily be targeted at the specific cell type that needs therapy.

The ability to create functional systems on the nanometre scale has increasingly allowed scientists to connect artificial systems to living cells, blurring the boundaries between biology and electronics. Prosthetic implants such as artificial retinae are among the most promising applications of this research field. Devices delivering a primitive kind of vision with just a small number of pixels have already been tested on patients, and substantial progress in this field can be expected in the next few years.

The use of nanowires has also helped researchers to make electronics and neurons communicate on the same level, at least as far as feature sizes are concerned. Last year, Charles Lieber's group at Harvard succeeded in growing neurons on a substrate containing numerous nanowire field effect transistors. Previous electrodes used to contact neurons were of comparable size to the cell itself, leaving little room to address specific parts of the cell. The nanowires, however, being much smaller than the neuron, can be made to establish contact in different locations along the cell's body and indeed its axon (nerve fibre).

In one experiment, the researchers coaxed an axon to spread out along an array of 50 nanowire transistors, resulting in 43 functional contacts. They could therefore monitor the progress of nerve signals within a single cell with unprecedented resolution.5 This work reminds us that nano-technology is a move towards a 'natural' technology, because it operates on the same scale as the machinery of life and is thus more suitable to establish interfaces with living systems than the macroscale technology of the past few centuries.

Nanocomputers and other digital toys

The computer industry has been one of the main driving forces of the ongoing miniaturisation of technology. Smaller chips mean faster and more efficient computers. Therefore the chip makers, along with manufacturers of other digital hardware, have been pushing the lower limits of fabrication, and have been operating deep in the nanometre range for some time now. At the time of writing, several manufacturers had reported further breakthroughs in nanoscale manufacturing. Hewlett Packard, for example, announced in January that it had used nanowire technologies to increase the number of transistors on a programmable chip by a factor of eight. At around the same time, both Intel and IBM announced that they were about to reduce the feature size on their chips to just 45 nm.

At this rate of progress, the day when miniaturisation hits the wall defined by the laws of physics is only a few years away. At that point, manufacturers will have to replace their current miniaturisation strategies with something different, such as molecular or quantum computation, if they want to keep making ever faster computers.

In the wider world of digital technology, nanotechnology also helps to improve popular gadgets like digital cameras and the associated printing technologies. In February, Kodak announced a new photo paper for inkjet printers that includes ceramic nanoparticles in a complex nine-layer composition. The company claims that photos printed on this paper can last for over a century, even if exposed to light and/or humidity.

The rapid invasion of nanoparticles in many areas of our lives has also raised concerns about possible risks associated with the small particle size. Fears are often derived from a perceived analogy to asbestos, where the fibrous nature rather than the chemical functionality produced unexpected hazards. However, in the first in vivo study of a range of nanoparticles, compared with the same materials in bulk, researchers in Germany did not find any severe toxic effects that could be attributed to the particle size.6 The nanotech revolution is set to continue.