Phenol encountered in school or college chemistry laboratories demands special respect on account of its toxic and corrosive nature. But phenol and its derivatives do have a few medicinal surprises

Even transient contact with phenol results in white blisters which, if left untreated, will destroy the underlying tissues. The ability of phenol to harden and destroy (sclerose) flesh, however, has found application in medicine. From 1904, 5 per cent solutions of phenol (usually in vegetable oil) have been used to seal off varicose veins and to shrink haemorrhoids.1 When such solutions are injected into a nerve, the cells and surrounding cells are destroyed and thus the ability to transmit pain. While this is useful in relieving otherwise intractable pain, it does have its disadvantages. Not only is the painful stimulus removed, but also all sensation from the region served by the nerve. No more painful toe, for instance, but a numb foot with all the hazards of not having sensation in your foot for safe walking and balance.

Despite the dramatic effect of phenol on animal tissue, chemists at ICI Pharmaceuticals Division, at Alderley Park, Macclesfield, Cheshire, decided to investigate the physiological and potential anaesthetic properties of this substance and its derivatives. The work, which was done during the 1970s, involved investigating substances that had previously been ignored because they were either insoluble in blood or plasma, or perceived to be too corrosive or toxic to warrant further study.

The chemists solubilised/dispersed some of these chemicals as emulsions in Cremophor EL, an expoxylated castor oil, so that they could then inject them into animals. This technique had been first developed in the 1950s to solubilise carbohydrates, fats and vitamins to give them to patients intravenously when they were too ill to eat.

Relatively early in their studies, the ICI chemists hit on a lead molecule - 2,6-diethylphenol - that put mice to sleep with a dose of 15-20 mg kg-1 body mass. The compound was safe - its lethal dose (LD50) was some five-six times greater than this. Indeed, it was even safer than the existing 'gold standard' for intravenous anaesthesia, sodium pentothal, which had only a four-fold margin of safety. However, 2,6-diethylphenol was slow to induce anaesthesia, so the chemists continued to search for other agents among the phenols.

Even unsubstituted phenol was briefly investigated: yes, it acted as an anaesthetic, but its median hypnotic dose (70 mg kg-1 body mass) was too close to its lethal dose (100 mg kg-1 body mass) to warrant further investigation. It rapidly became clear that further success would be found among the alkylphenols, and particularly among those that were, like the lead compound, doubly ortho -substituted. The chemists trawled for likely candidates among suppliers' catalogues and the shelves of ICI laboratories across the world, and many compounds were synthesised for testing.

Success came with a substance cheaply available from Aldrich Chemical - 2,6-di-isopropyl phenol (1), solubilised in water with the aid of  Cremophor EL . This rendered animals unconscious in around 10s at a dose of 5-10 mg kg-1 body mass, distant from the median lethal dose of 50-60 mg kg-1 body mass.

The first clinical trials of 2,6-di-isopropyl phenol, in 1977, reported that a single injection of ca  40-70 mg would send a patient to sleep in less than half a minute, and that unconsciousness would persist for three or four minutes.

Recovery in every case was remarkably quick and excellent, although in one patient the euphoria closely resembled alcoholic intoxication, even to the singing.3

For any but the most minor of surgical operations, anaesthesia could be maintained simply by continuously infusing the di-isopropyl phenol into the patient's vein by using a motorised syringe pump. The agent (marketed as  Diprivan or  Propofol ) became widely available in the mid-1980s. Today, if you go into hospital for an operation, it is almost certain that you will be put to sleep with an intravenous agent. The anaesthesia will sometimes be maintained with a gas or volatile vapour, but increasingly with further doses of an intravenous agent. And 95 times out of 100, the chemical responsible for both induction and maintenance will be  Propofol , our 2,6-di-isopropyl phenol. A few patients react adversely to the Cremophor EL, so this has been replaced by a mixture of soybean oil, glycerol and egg lecithin.4

Friedlieb Ferdinand Runge (pictured below) first isolated phenol in 1834 by distilling coal tar. He called it Karbolsäure (coal-oil acid) because of its action on vegetable dye indicators, which gave rise to today's non-systematic name carbolic acid. The effectiveness of carbolic acid in deodorising sewage prompted surgeon Joseph Lister to use it (2.5-5 per cent solutions) as an antiseptic agent to prevent the infections that at the time were associated with injury and surgery.

2,6-Di-isopropyl phenol was synthesised in 1956.5 Phenol is heated with propene under pressure in the presence of a small amount of aluminium phenoxide (see Scheme 1). The alkene attacks the benzene nucleus almost exclusively in the 2- and 6-positions presumably owing to some form of transient electronic attachment between the aluminium atom and the propene-derived carbocation. Yields of the target molecule exceed 60 per cent. 2,6-Di-isopropyl phenol was available cheaply but, without any significant uses, it languished as a chemical curiosity on suppliers' shelves until its role in intravenous anaesthesia was recognised. 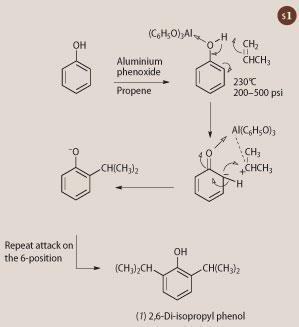 Phenol derivatives continue to offer new surprises in medicine. The recent introduction of mycophenolate mofetil (2, MMF) has led to a significant reduction of rejection of transplanted organs, including heart, liver and kidney transplants. This, too, is a doubly ortho -substituted phenol. Moreover, the anaesthetic for the transplant surgery will probably have been Propofol.

We are grateful for helpful discussions with, and advice from, Dr J. B. (Iain) Glen, co-discoverer of Propofol. We thank Dr John Pring, consultant anaesthetist at the West Cornwall Hospital, for comments about the current status of Propofol anaesthesia.