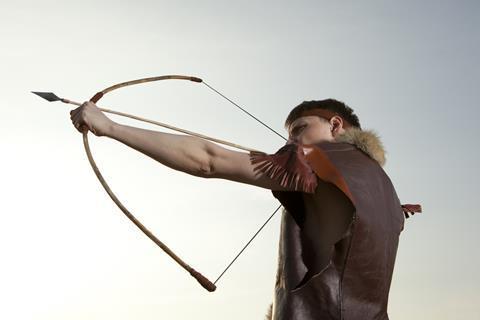 Robin Hood’s catapult had the power but could its aim be true?

In the 1991 version of Robin Hood, starring Kevin Costner, there is a scene where Robin and a friend are catapulted over a castle wall, safely landing onto a large haystack on the other side. It looks great but really how feasible is this stunt?

In the film the catapult looks rather like a giant crossbow with a tensioned string connected to the platform that the two characters sit on. Such a mechanism could develop its power by winding up tension on a rope and unleashing the stored energy like a giant spring.

In antiquity there were catapults and trebuchets capable of flinging heavy objects great distances and there is a legend that the best fibres were made of maidens hair: bundles of long hairs cut from several woman’s heads and plated into a rope.

Hair is composed of keratin – a long stranded protein that twists around other keratin molecules to form rope-like filaments. It is very strong and has a natural elasticity which is good for storing energy.1 The strength of human hair is far greater than many appreciate and there are circus acts that suspend people from their hair.2 A typical hair is very fine – about 0.1 mm in diameter – and by hanging weights I found that a typical hair could take 50 g, although hair strength varies from person to person and with ethnicity.1 To see if a hair could be used we need to estimate the forces on the catapult rope.

If each hair can take 50g we would need 5 000 000 / 50 = 100 000 hairs – about the number of hairs on a typical head. This amounts to a bundle of about 330 x 330 hairs in cross section which would only be a few cm in diameter – so not unfeasible. The serious issue is not so much the catapult’s ability to lift the load but the accuracy of its trajectory. Even if it could throw them up how would you make sure you didn’t smash Robin and his friends onto the walls or simply toss them in the wrong direction – that would be the end of our merry men!