Ionic compounds are usually high melting point solids. But mix together a powdered organic salt with aluminium chloride and the result is a clear, colourless, 'ionic liquid' 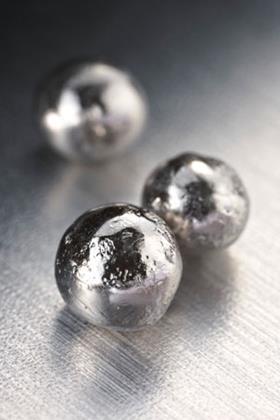 Solvents, in particular volatile organic compounds (VOCs), are used in the manufacturing and processing of almost every product we use. By their nature they are relatively small molecules that have weak intermolecular forces between them, making them highly volatile. They are also flammable and often toxic. Each year the UK emits about half a million tonnes of VOCs into the lower atmosphere from solvent use alone and these become involved in the ozone cycle, leading to a destruction of the protective ozone layer in the atmosphere. With the current emphasis on 'greening' the chemical industry - ie making its operations safer and environmentally acceptable - there has been much interest in finding non-volatile solvents as replacements.

What about ionic compounds?

In contrast to their molecular counterparts, ionic compounds are neither volatile nor flammable and not particularly toxic, making them potentially safer to work with as solvents. But classically we are taught that ionic compounds are high melting point solids - there are strong interactions between ions, which easily organise themselves into stable lattices. So their use as solvents in the liquid state seems counterintuitive. In fact, salts have been used in their liquid state for centuries in the extraction of such metals as sodium, magnesium and aluminium. Salts are also excellent solvents because they have large potential fields around the ions, which interact strongly with a wide range of solutes. This is why you put salt on a red wine stain - the sodium and chloride ions coordinate to the tannins in the wine and stop them interacting with fibres in the cloth.

The key barrier facing chemists to the development and widespread use of salts as solvents seems, therefore, to be their melting points. To a first approximation, the melting point of an ionic compound is related to the lattice enthalpy, which in turn is related to the size and charge of the ions; the larger the ions and the smaller the charge, the less energy is required to break the ionic bonds (see Table 1).

So, organic cations with quaternary ammonium groups (R4N+) have low lattice energies and much lower melting points than their alkali metal analogues. For example, tetrabutylammonium bromide melts at 104°C whereas NaBr melts at 747°C. The symmetry of the ions is also important: non-symmetrical ions are more difficult to fit into a lattice and so the lattice energy and melting point will be lower. Thus most attempts to make low melting point salts, or ionic liquids, have used bulky anions such as (F3CSO2)2 N-, BF4-, PF6- and F3CSO3-, and cations such as butylmethylimidazolium and butyl pyridinium.

There is some dispute in the literature about which ionic liquid was the first, but this seems to depend on whether the authors worked on metal- or non-metal-containing anions.

The main consensus seems to be that the first major studies of ambient temperature salts (the term ionic liquid has been used to describe salts that melt below 100°C) were in the 1940s by a group, led by Frank Hurley and Tom Weir, at Rice University. They were looking for a cheaper and easier way to electroplate aluminium. When they mixed and gently warmed powdered pyridinium halides with aluminium chloride, the powders reacted, giving a clear, colourless liquid.1 The resulting mixtures contain complex chloroaluminate anions such as AlCl4- and Al2Cl7- that are large and hence reduce the charge density, and bulky asymmetric organic cations, which cannot pack neatly, thus lowering the lattice energy. Similar ionic liquids have been made using a wide variety of quaternary ammonium salts, most notably imidazolium cations.2 Aluminium chloride, however, reacts readily with water, which has limited the use of these types of ionic liquids to the electrodeposition of aluminium metal and some synthetic reactions requiring very strong Lewis acid catalysts. The principle can be extended to other metal-containing salts such as zinc(ii), tin(ii) and iron(iii) halides.3

The preparation of ethylammonium nitrate (C2H5N+H3NO3-) by P. Walden in 1914 is recognised by many as the first ionic liquid.4 This compound has a melting point of 12°C but has not really found a use, owing to its high reactivity. More recent studies have concentrated on inert, non-metal-containing anions such as triflamide (F3CSO2)2N- and hexafluorophosphate.2,5 Liquids with these anions are less reactive and more air stable than the chloroaluminate based ionic liquids and some are even water immiscible. Possibly the most studied one is 1-butyl-3-methylimidazolium hexafluorophosphate, which is liquid at room temperature and only freezes at -40°C. These particular ionic liquids have been studied for a wide range of synthetic applications. They are, however, quite difficult to make, very expensive, and their toxicity has not yet been ascertained. Accordingly, none of these compounds has been registered and this currently limits their wide-scale use.

Nevertheless, several companies are developing industrial processes based on ionic liquids. BASF, for example, is currently scaling up a process using alkyl imidazoles as a base for the synthesis of alkoxyphenylphosphines. These are precursors for the synthesis of photoinitiators used in the manufacture of printing inks, glass fibres and wood coatings. The phosphines are prepared by the reaction of phenyl-chlorophosphines with alcohols, as shown in Scheme 1. To drive the reaction a base is required, but separating the salt produced is difficult for the majority of tertiary amines. The use of imidazoles, as shown in Scheme 1, is interesting because the quaternary ammonium salt forms as a liquid in a separate phase, making separation easier. 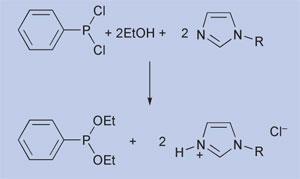 An alternative approach to making large non-symmetric ions is to take a simple organic halide salt and complex the anion with something that will form a hydrogen bond. The complexing agent interacts with the anion, increasing its effective size. This in turn decreases the interaction with the cation and so decreases the freezing point of the mixture. The major advantage of this approach is that common, non-toxic components can be used and the properties of the liquid can be changed with each hydrogen bond formed and each halide salt. This approach has numerous possibilities. Consider how many quaternary ammonium salts are available and the wide variety of amides, amines, carboxylic acids and alcohols which could be used to provide hydrogen bonds. These liquids are similar to the metal-containing ionic liquids, but to differentiate them from the wide range of ionic liquids that are available they have been given the name deep eutectic solvents. Best of all, they are easy to make - simply take the two solids, mix them together with gentle heating, until they melt, and when they cool they remain liquid (see Box 1).

Work to date has focused on choline (2-hydroxyethyl-trimethylammonium) chloride as the quaternary ammonium salt.6 This is vitamin B4 and is produced on the Mtonne per annum scale as an additive for chicken feed and a wide range of other applications. Thus choline chloride is not only cheap and easy to make, but it is non-toxic and even biodegradable. Ionic liquids based on choline chloride have, therefore, the potential to be used on a large scale.

Ionic liquids are relatively easy to make. Simply mix together 0.01 moles (1.4g) of choline chloride with 0.02 moles (1.2g) of urea in a boiling tube and heat them to 80°C on a hot plate or in a water bath. Stir them constantly with a glass rod until a homogeneous liquid is formed. This should remain liquid down to approximately 12°C which is 122°C below that of urea and 290°C below that of choline chloride!

You could then try to see what types of compounds are soluble in this ionic liquid. Ionic liquids have unusual solvent properties - for example, they dissolve a wide variety of metal salts including AgCl, metal oxides such as CuO, sugars and even cellulose (put in some filter paper and see if it dissolves). You could also try to see which liquids are miscible with the ionic liquids. In general, if the compound can form a hydrogen bond it will be soluble. 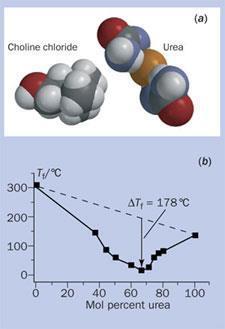 One simple hydrogen bond 'donor' that has been used is urea ((NH2)2 C=O), which is a common fertiliser. Urea mixed with choline chloride in a 2:1 ratio produces a colourless liquid that freezes at ca 12°C, which is remarkable given the melting points of the constituents (choline chloride melts at 303°C and urea at 134°C). Figure 1 (a) shows a schematic diagram of how the urea molecules complex the chloride ion and Fig 1 (b) shows the freezing point of the liquid as a function of composition. The lowest melting point of these mixtures (termed the 'eutectic composition') occurs when the ratio of salt to hydrogen bond donor is 1:2. The depression of freezing point and the eutectic composition changes with the nature of the molecule providing the hydrogen bonds, eg oxalic acid (HOOCCOOH): choline chloride has a eutectic composition of 1:1 and a depression of freezing point of 212°C.

The phenomenon of mixing two solids to make a liquid is not new; every winter this principle is used when salt is added to ice on roads. With deep eutectic solvents, however, the magnitude of the freezing point depression is over 10 times greater than with ice and salt. This approach works best if both the salt and the compound containing the hydrogen bond are solid at ambient temperature. Since the formation of the liquid is endothermic, the driving force for the formation is entropy - taking two highly ordered solids and changing them into a liquid causes a large increase in the degree of disorder of the system.

Probably the most exciting aspect of deep eutectic solvents research is that a whole host of applications is available because of the ease of manufacture and environmental advantages.7 Ionic liquids dissolve a wide range of solutes in high concentrations (see Table 2). As bulk solvents they can be used in applications like cleaning. They can also dissolve a wide range of metal oxides, owing to their high chloride content (see Fig 2).

Figure 2: Dissolution of a range of metal oxides in ionic liquids

Further, since the liquids are ionic, they are good conductors of electricity and as such find use in electrochemical applications. They are currently being developed for electroplating chromium, which is a multi-billion pound worldwide industry. The traditional process uses chromic acid, which is not only extremely hazardous to use but it is also very inefficient. The work to date shows that thick, adherent and crack-free chromium can be obtained by using ionic liquids and this process is currently being scaled-up.

Ionic liquids are also being applied to the electropolishing of stainless steels. The common industrial process uses a mixture of sulphuric and phosphoric acids. Initial results have shown that not only is the use of ionic liquids more benign, but they provide superior surface finishes than is obtained by using the mixture of acids. Developing a process that uses 'clean' chemistry is clearly desirable but the technology will only be adopted if there are also economic benefits. In the case of the electropolishing process, the power consumption when ionic liquids are used is approximately a quarter of that when aqueous acid solutions are used, thus providing a significant economic driver.

Ionic liquids, and deep eutectic solvents in particular, are in their infancy but they have generated a huge amount of academic interest over the past decade and are beginning to yield some industrial potential. There are an almost limitless variety of liquids still to be discovered with a wide range of possible applications. Thus for ionic liquids the future is bright and the future is green.

Drs Andrew Abbott and David Davies are senior lecturers in the department of chemistry at the University of Leicester, Leicester LE1 7RH. They have also set up a spin-out company, Scionix, to develop industrial applications for ionic liquids.