Early in her academic career in the US, chromatographer Apryll Stalcup would visit primary schools to talk to them about her work. ‘During one visit, the class mouse had been kidnapped and the kidnapper had left a ransom note,’ she recalls. ‘The vice principal, who is everybody's favourite villain in the US, came in and the kids took his pen. They analysed the ink from his pen, compared it to the ink the ransom note was written with, and found it was the same type of pen. So they were able to get the class mouse back.’ 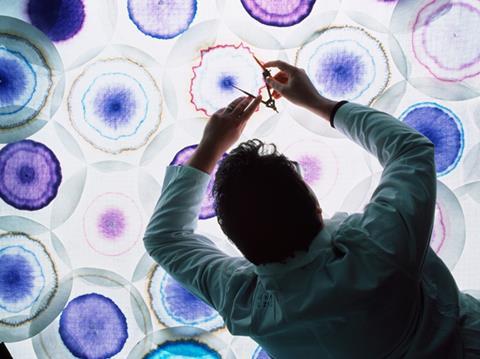 Most of us were introduced to chromatography in a similar way as young children, and have vivid memories of watching colourful streaks of ink travelling upwards on a piece of blotting paper propped up in a glass of water. But as memorable as this early experiment is, many pupils leave education without grasping how widely-used this fundamentally simple technique is in the real world.

The term chromatography encompasses an alphabet soup of techniques all used to separate mixtures. By definition, a chromatographic technique has two phases: a mobile phase (such as a gas or a liquid) that carries the mixture through a material that is stationary. Because different components of the mixture will travel through this stationary phase at different speeds, depending on their ‘stickiness’, the mixture becomes separated into its component parts.

Russian-Italian botanist Mikhail Tsvet is credited as the inventor of chromatography for his early 1900s work developing the method to separate the chlorophylls and some carotenoids in plant pigments. He dissolved the pigments from the leaves using ether and alcohol and then percolated the solution through a column of calcium carbonate. The technique was not initially well accepted by the scientific community, however, and its use didn’t become widespread until the 1930s. (See timeline for more historical information.)

Today, chromatography is an essential analytical tool that is used extensively by chemists, biologists, forensic scientists and environmental scientists all over the world. It comes in many, many forms, all designed to meet specific purposes. These chromatographic instruments are often coupled to a detector, such as a mass spectrometer, that is able to identify the components of the mixture once separated.

It isn’t just school-aged, mouse-saving forensic scientists that rely on chromatography to find the perpetrators of crimes. These techniques have an abundance of different uses in forensics including for detecting components of bombs, analysing drug and alcohol levels in blood, identifying fibres found at crime scenes and finding poisons or other things that shouldn’t be in foods.

Apryll’s research team, now at Dublin City University in Ireland, in collaboration with Henry Spitz at the University of Cincinnati, US, recently used chromatography to help solve a nuclear forensics problem: dating a discarded section of a fuel rod. ‘Uranium fuel rods for nuclear reactors are made using a technique called zone refining or zone melting. They heat a section of the rod and then make this heated zone travel to the end of the rod, collecting all the impurities at the very end. Then that end gets knocked off,’ she explains. ‘There was a factory that was abandoned, and someone found a little end of one of those rods lying in the dirt. One of my students got to analyse it using chromatography. Because of radioactive decay, they were able to date the rod and found that production of the rod coincided with when the factory was in operation.’

Although this project had an obvious purpose – confirming the source of a nuclear material – much of Apryll’s research is fundamental. ‘My group is focused not so much on applications as trying to understand how these techniques work, so that the people who need to use them in new or novel applications have a way to approach the problem systematically, not just go in there and have to do a scattershot approach,’ she explains. Her group’s main focus currently is liquid chromatography techniques.

‘HPLC (high performance liquid chromatography) is a workhorse tool across many industries including pharma,’ says Melissa Hanna-Brown, a chromatography expert at the Pfizer Global R+D Labs in Sandwich, UK. ‘It's got such a wide versatility for a wide range of compound types that it's used throughout the whole life-cycle of a drug. Most of the Pfizer laboratories have HPLC.’

HPLC is used by chemists in the very first stages of drug discovery; to aid the identification of the molecules they are making that will go on to be screened against cells to see if they have a desirable therapeutic activity. Once a suitable molecule is identified, it will be passed to the drug development chemists to develop it into a drug. Melissa works in the drug development section of Pfizer. In the early stages of drug development, HPLC is usually coupled with a mass spectrometer, she explains. ‘Being able to detect everything that's in the sample mixture that you're presented with is very, very important because you don't know everything about the compound that you’re developing. You're gathering knowledge as you're going along.’

In the early stages of drug development, chemists look at various different ways to make a molecule – known as synthetic routes – in order to find the method that is most efficient in terms of safety for the patient, and also efficient in terms of the manufacturing process and then cost efficient as well. ‘For every tweak that they make to the synthetic process, the analysts are getting samples for which we will generally use HPLC-MS,’ Melissa says. ‘A chemist will tell you what they think they've made but you can't take that as gospel, you have to make sure that you detect everything in a sample and separate everything in it too.’

Melissa’s analytical chemists also work with the formulators, the scientists who turn the active molecule into the tablet, capsule or liquid that will be taken by patients. ‘When the formulators are formulating your active pharmaceutical ingredient with various different excipients, for example bulking agents, and using various different manufacturing processes to get that medicinal product made, then everything that you introduce into that manufacturing process has the potential to introduce impurities and may be safe or may not be safe for patients.’ High-resolution versions of HPLC together with mass spectrometry are very important at this stage in the drug life-cycle.

‘As you go later into development, speed becomes the key driver; so when you get into a manufacturing environment, you actually see less mass spec. They want simpler, very robust methods and fast analytical methods,’ she says. HPLC, however, remains one of the main tests used at regular intervals during the manufacture of both the active ingredient and the drug product to ensure everything is going to plan.

Chromatography is also used during the development of drugs to figure out what they are doing once inside the body. ‘When a pharmaceutical company is trying to develop a new drug, it is tested on animals and then people. They need to monitor how long it takes for the drug to be metabolised and what it gets metabolised to,’ explains Apryll. This research area, known as pharmacokinetics, relies heavily on HPLC and mass spectrometry.

Another industry that utilises a lot of chromatography for analysis is petrochemicals. John Langley is an expert in techniques involving chromatography coupled to mass spectrometry at the University of Southampton, UK. He is interested in developing analytical tools for use in that arena with a particular focus on identifying additives and materials that are present in fuels.

‘We're currently looking at corrosion inhibitors that are used in crude oil pipelines,’ he explains. ‘Crude oil is doped with a corrosion inhibitor, or a family of corrosion inhibitors, that coat the inside wall of the pipeline. We need to know that they’re at the appropriate levels and that they're doing their job otherwise your pipeline crumbles, which is expensive. If you over-dope then you're wasting material, but it's the under-doping that is the important factor.’ 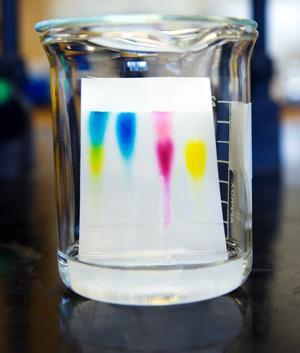 His team has also recently developed a supercritical fluid chromatography method for determining the presence of bio-fuels or bio-diesel in aviation fuel. ‘Aviation fuel by definition has to have no renewable fuels in it,’ John explains. The traditional tool for checking this is gas chromatography-mass spectrometry (GC-MS). ‘We published a supercritical fluid chromatography method which is 10 times faster and also accesses the new materials from bio-diesels that could get into the pipelines.’

Supercritical fluid chromatography has grown in popularity in recent years due to a new generation of instruments hitting the marketplace. ‘Supercritical fluid chromatography has been around over 50 years. It's been through a few painful iterations due to an initial lack of robustness of technology,’ explains John. ‘Over the last 10 years, and particularly in the last two to three years, really robust instrumentation is being developed by a number of different manufacturers.’

Not only winning over chromatographers with its speed and efficiency, the technique also has green credentials as it generates less waste than liquid chromatography. Carbon dioxide is a popular gas for use as the mobile phase. ‘The CO2 is collected as a by-product from other chemical reactions or collected directly from the atmosphere and, therefore, contributes no new CO2 to the environment,’ explains John on his group’s webpage.

Chromatography is also a very popular analytical technique for the environmental scientists charged with keeping watch of the purity of our air, soil and water. Here, GC is often favoured, especially for air analysis where the sample itself is gaseous. Portable GCs coupled with various different detectors are commercially available for use in the field. These devices are about the size of a briefcase and give pretty much immediate results.

Chromatography is also proving its worth as an instrument for space research. A gas chromatograph has been rolling around the surface of Mars onboard the Curiosity rover since 2012. It is part of the three-instrument suite called SAM (sample analysis at Mars) that has been charged with investigating the chemistry of the planet’s surface and atmosphere. After separation, the gases will be analysed using the onboard mass spectrometer or laser spectrometer. Of particular interest are the gases that would signify the possibility of current or past life: methane, carbon dioxide and water vapour.

And while strong evidence for life on Mars has not yet been found, chromatography has proven itself worthy of inclusion in future rovers. A GC-MS will be included in the Moma (Mars organics molecule analyser) instrument on the ExoMars rover, a European Space Agency mission to Mars due to launch in 2018.

With such a stellar reputation both here on Earth and in space, I think it’s fair to say that the uses for chromatography have not yet reached their peak.