Set a fungus to catch a fungus 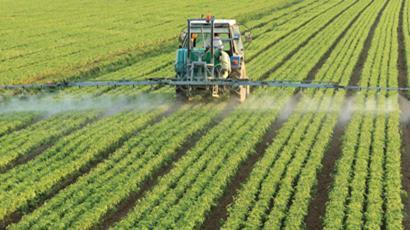 In 1960, a group of scientists cut a slice off a mushroom growing on a beech tree in the woods of South Bohemia, now part of the Czech Republic. Cultivating the sample in their lab, they noticed that their new mushroom prevented other fungi from growing in the same area. Little did they know, they had come across the inspiration for a new type of fungicide worth billions of pounds. 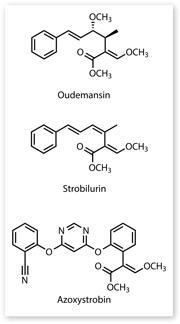 The global crop protection industry was worth $47 billion in 2012. Azoxystrobin is the world's best-selling fungicide

Discovering new fungicides is big business. Not only can they be used to treat infections like athlete's foot, but they also form a major part of the global crop protection industry, which was worth $47 billion in 2012. The compound responsible for what the Czech microbiologists observed was the starting point for the development of azoxystrobin, the world's best-selling fungicide with over $1 billion-worth sold worldwide each year.

Unfortunately, being behind the iron curtain of post-war Soviet Europe meant that the discovery of this unusual mushroom did not get very far. It took another 17 years before a team from [West] Germany discovered the same activity in a similar species. This time, though, it was noticed.

The team of scientists led by Tim Anke isolated antifungal compounds from the mushroom, which they named oudemansin and strobilurin. These were very similar compounds and both contained the β-methoxyacrylate group that is key to their activity. Researchers from ICI's agricultural division (now part of Syngenta) read Anke's paper about these new compounds and asked for a sample to test. 'They're an interesting pair of compounds and you can see they are quite similar to each other structurally,' says John Clough, a chemist at Syngenta who worked on the project from the beginning. 'Strobilurin is the simpler of the compounds, so from the point of view of synthesis it is a more attractive starting point.'

From forest to lab 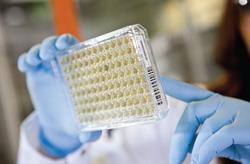 The chain of double bonds in strobilurin creates a conjugated system of electrons that absorbs UV light. Sunlight caused strobilurin to break down; clearly not ideal for a chemical that will be sprayed onto crops growing in the sunshine.

Despite this, the powerful activity seen in the other tests meant that strobilurin could not be ignored. The chemists started trying to produce similar compounds that would not break down in sunlight. One simple way to do this is to remove the double bonds. But this allows the single bonds to rotate, changing the shape of the molecule and making it bind less strongly to its target enzyme. To avoid this and keep the molecule fixed in position, they replaced the middle double bond with a benzene ring.

The new compound worked very well in the glasshouse, but tests with a powerful sun-lamp suggested that it still degraded too rapidly. This was confirmed by small scale field tests. A change to the structure to make a diphenyl ether ensured its stability, and also provided another advantage: 'It was the first strobilurin-like compound that had systemic activity. In other words, it moves around in plants,' says Clough.

This systemic activity is a major consideration when developing modern pesticides. Old-fashioned chemicals would stay on the leaf where they were sprayed and protect just that area. Systemic compounds can be absorbed through the leaves and pass through into the xylem, which is used by the plant to transport nutrients up from the roots. By taking advantage of this, the compounds can spread throughout the plant and even protect parts that have yet to grow. 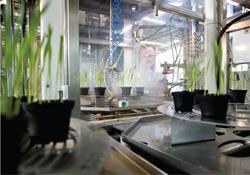 BASF (pictured) were working in the same area as ICI at the same time. BASF launched kresoxim-methyl and ICI had azoxystrobin

Systemic compounds have their own difficulties. By going deep into the plant, they have the potential to cause more damage than they prevent. 'A lot of the compounds early on in the programme were nice and systemic but they were quite toxic to the crop plants and so were non-starters as products. A key part of the optimisation program was to maintain the systemic effect, but to improve the safety to the crop,' says Clough. 'If something is going to get into the plant and be systemic it must be very selective, and that's hard to achieve sometimes.'

Clough and colleagues made analogues of the diphenyl ether in the hope of boosting the potency. Adding another phenoxy group did the job but also increased the lipophilicity, making it greasier. Lipophilic compounds get stuck on the waxy surface of the leaves, so the systemic activity is lost. Systemic activity also depends on solubility, with only a narrow window to get it right. In another attempt, the chemists replaced a benzene ring with pyridine, just a difference of swapping one carbon atom for a nitrogen. This made it more soluble in water, so it travelled too quickly through the xylem, leaving the base of the plant unprotected.

They synthesised a new compound combining both aspects - the extra phenoxy substituent and a pyrimidine ring in the middle - it had the extra potency and the right solubility to be systemic. They called it azoxystrobin.

After producing over 1400 compounds and taking 50 chemist-years, the team knew they had something special. 'It has an appeal because you start off with compounds from nature,' says Clough. 'We have many research programs based on natural products but normally, like most research programs, they don't lead to anything suitable for development and manufacture. But they are a good source of inspiration; if you do get to the market with something it tends to be very different and pioneering.'

One of the key drivers for developing new fungicides, herbicides or antibiotics is the search for new modes of action. Compounds that attack a target in the same way will all become less effective or even useless if resistance develops. Having different methods of attack can mean that different compounds can be combined or used in rotation to stop resistance building up. 'If you look at all of the fungicides sold, they represent relatively few modes of action, probably 20-30 in total. So new modes of action are always valuable.'

This is part of what made azoxystrobin special. Just like strobilurin and oudemansin that inspired the chemists, its target was different to anything seen before. Azoxystrobin binds to the protein cytochrome b, which plays a vital role in converting chemical energy from food into a form that the fungus cells can use. By preventing cytochrome b from working correctly, the fungi run out of energy and die. This protein target is universal across fungi, so azoxystrobin can be used against all classes of fungal plant pathogens.

With a compound that ticked all the boxes, the company raced to the patent office to stake their claim to the discovery. What they didn't realise was that a rival company, BASF, was working with Anke on its own analogues of strobilurin and oudemansin. 'We filed our first patent and we thought: "Great, we're pioneers in this area", and indeed we were,' Clough describes. 'Then seven or eight months later, BASF's first patent appeared. You can tell from the dates that BASF had filed the patent before they saw ours published. They were working in this area independently. Fortunately we had a few months advantage on them.' The first two products were launched within a month of each other: BASF had kresoxim-methyl and ICI had azoxystrobin.

From lab to field

Azoxystrobin is now used on over 100 crops including cereals, fruit, vegetables and even grass on golf courses. Unexpectedly, one of the major uses of azoxystrobin has been to control soya rust. 'It wasn't commercially of any importance when we launched azoxystrobin, but it emerged about eight or 10 years ago as an important fungal pathogen,' describes Clough. The rust fungus, which had been confined to parts of Africa, made the jump over to South America. 'It worked its way northwards quite quickly, so it has become a serious problem in the southern states of the US - it is a devastating disease.' 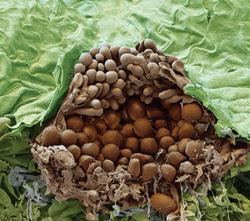 The specific nature of azoxystrobin, targeting one binding site on a specific protein complex, is a double-edged sword, as Clough explains: 'The advantage is that you can finely tune the structure and get compounds that are very potent and very selective. It's like a key fitting perfectly into a certain lock. But if you have a mutation in the active site, you can very quickly find that the key doesn't fit the new lock.' A tiny percentage of some species of fungi were already resistant to azoxystrobin from the beginning. After a few years of applying the fungicide, only the resistant strains were left to grow. Before long, the resistant fungi dominated the population and azoxystrobin was no longer effective against some diseases.

To prevent this resistance from increasing, different fungicides are either mixed together or rotated around. 'If you have a small proportion of the fungi that are naturally resistant to strobilurins, that population is probably not resistant to fungicides of a different class, so by using two or three different modes of action you clobber them all and you don't allow any of them to build up.' 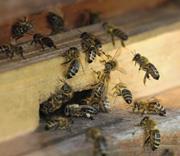 Crop protection products are central to modern agriculture, but are rarely far from the news: neonicotinoids have been featured recently because of concerns regarding their effects on bees

Crop protection chemicals like azoxystrobin are a multi-billion pound industry. And that industry is likely to become larger, as Nick von Westenholz, chief executive of the Crop Protection Association, describes: 'Crop protection products are central to modern agriculture, and given that global demand for food is only going to rise over the next few decades ... we are going to have to look to technology to help us to achieve that increased production.' However, these chemicals are rarely far from the news. Recently, the use of three neonicotinoid insecticides was restricted by the European Commission because of concerns regarding their effects on bees. Environmental impact is an important factor in developing new products. Von Westenholz adds that the challenge the industry faces is to 'enable farmers and growers to increase production and to fight pest and disease pressure, but do so in a way that doesn't damage the environment and make food production unsustainable'.

Clough agrees with this outlook, 'In the last five years, food security has been much more in the news than it was previously. The view in our industry is that it is through technology that we will be able to feed a growing population.'

Azoxystrobin plays a large part in protecting that food security and is one of the big success stories in crop protection. It's more than a bit ironic that the world's best-selling fungicide was originally inspired by an antisocial fungus, but perhaps it's a good example of the deviousness of nature and the ingenuity of chemists.

Ian Le Guillou is a science writer based in London, UK

Discovery of azoxystrobin
See John Clough talk about azoxystrobin, its discovery and development