Spices have been used in cooking since Roman times,1 and were believed to be important as antiparasitic agents and as gastrointestinal protectants in the diet. Today chemists in the West are increasingly looking at the molecules contained in these spices to find out if they really do have medicinal properties.

Capsaicin (1) is responsible for the 'hotness' of chilli peppers. Part of the molecule is structurally similar to vanillin, and so belongs to a class of compounds called vanilloids. The other part has an amide group and an extended hydrocarbon chain, making capsaicin a member of the alkylamide family. Molecules with both these parts are called capsaicinoids.

Scientists have been investigating how the body responds to chillies. In the mouth, lips, throat, tongue and nasal cavity, capsaicin binds to the membrane at the ends of nerve cells, specifically sensory neurons, where it is recognised by a specific protein (a sensory receptor) located in the membrane. They believe that this protein (TRPV1) is important in the detection of noxious stimuli, including abrasion, heat, acids, and vanilloids. TRPV1 provides a channel for Ca2+ ions. When activated by a stimulus, the channel allows Ca2+ ions into the sensory nerve cell and this causes a signal to be sent to the pain-processing centres in the brain.2 The fact that capsaicinoids bind to the receptor that responds to a thermal stimulus explains why chillies are 'hot'. The 'hot' response releases endorphins in the brain, which have pain-relieving properties similar to opiates. Maybe this is why people get addicted to curries? 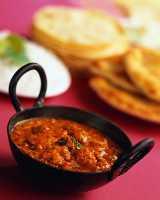 The structures of the capsaicinoids differ slightly, for example in the length of the hydrocarbon chain, and this may explain why some chillies affect the mouth and others the throat. Capsaicinoids contain large hydrophobic portions, which account for their insolubility in water. So if you find a curry is too 'hot' for you, water or beer won't really help; on the other hand milk, which contains the lipophilic molecule casein, is better at washing away the lipid-like capsaicins.

Capsaicinoids have been used medicinally for hundreds of years. Aztec Indians used chillies to relieve toothache, while the Mayans used them to treat asthma, coughs and sore throats. More recent uses for pain relief have followed the discovery that, while initial exposure of the skin to capsaicin causes pain, this is followed by desensitisation. Thus some commercial pain-relieving creams include capsaicin to reduce the pain, eg Zostrix, which is prescribed for pain relief of arthritis. Similarly, capsaicin-containing creams have been used to reduce post-surgical neuropathic pain in cancer patients. (Neuropathic pain, sometimes known as phantom limb pain, is common to people who have had a limb removed.) Sweets containing capsaicin have also been found to ease mouth pain in cancer patients - the capsaicin provides the pain relief, while the sugar helps to overcome the burning sensation caused by the molecule. Capsaicinoids are also known to have antibacterial properties, giving them potential to treat stomach ulcers.

Other peppers used in curries include: black peppers; Indian long peppers, which have largely been superseded by chilli peppers in the East; and ginger. Both black and Indian long peppers have amides as their active ingredient, which can stimulate the TRPV1 receptor. Piperine (2) is the principal active ingredient of black peppers, while the Indian long pepper (Piper longum) contains not only piperine but also two other alkylamides, piperlongumine (3) and pellitorine (4). These peppers - notably the piperine component - have been used to treat stomach complaints, such as ulcers, but little is yet known about the molecular mechanisms involved.

Ginger is less pungent than the preceding peppers, and contains the vanilloids gingerol (5), and zingerone (6), as well as the hydrocarbon zingiberine (7) as active ingredients; zingiberine alone makes up 35 per cent of ginger oil. Ginger has been shown to lower blood pressure and kill pain in for example osteoarthritis. However, the link to specific molecules has yet to be made. 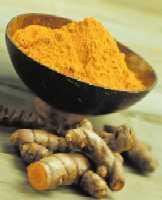 Turmeric is a key component of curries, the vanilloid curcumin (8) being the principal ingredient. Much research has focused on the medicinal properties of curcumin. In particular, this vanilloid blocks several enzymes required for the growth of tumours and may therefore have a role to play in future cancer treatments. For example:

Curcumin also inhibits cyclooxygenase-II (COX-II), an enzyme that catalyses reactions that produce prostaglandins. Prostaglandins are a group of hormones involved in several processes, including inflammation, so studies of curcumin as a COX-II inhibitor may provide new anti-inflammatory treatments. Curcumin could help prevent the development of peptic ulcers because it has been found to inhibit the growth of the bacterium Helicobacter pylori, which is implicated in their formation.

Other conditions that may benefit from curcumin in the future include:

All of these studies, however, are at a stage where it is too early to predict the health benefits of curcumin to people.

Fresh coriander owes its characteristic taste mainly to long-chain aldehydes, both saturated and unsaturated, with between 10 and 16 carbon atoms, particularly trans -2-dodecenal (H3C(CH2)8CH=CHCHO). Coriander juice is known to inhibit growth of Escherichia coli and Staphyococcus aureus, and recently it has been found that the aldehydes in fresh coriander leaves have antibacterial activity against Salmonella choleraesuis, one of the most common causes of food-borne bacterial illnesses. The greatest activity is shown by trans -2-dodecenal. Its increase in activity over compounds such as trans -2-hexenal correlates with its increased hydrophobicity and consequential non-ionic surfactant properties, eg its ability to break bacterial cell wall membranes.6

Cinnamaldehyde (C6H5CH=CHCHO) constitutes up to 90 per cent oil of cinnamon and is responsible for its aroma (though other molecules like eugenol, more usually associated with cloves, give it a more rounded flavour). Recently scientists have reported mosquito larvicidal activity for several cinnamon oils, the most effective being cinnamaldehyde. This compound may therefore find use in antimalarial preparations.7

Eugenol (9) is a major component of the essential oils from the buds of cloves and from bay leaves. It has general antimicrobial properties.

The phenolic group present gives it antibacterial properties and also water solubility, while the allylic C3 side chain enables it to dissolve in lipids. Taken together, this may account for its anaesthetising effects on nerve endings. Traditionally clove oil has been used to give relief from toothache, and also has an antiemetic (anti-vomiting) effect. It has also been used in mouthwashes.

Nutmeg and cloves, traditionally used in medicine particularly for stomach complaints, both contain myristicin (10), a molecule frequently alleged to have hallucinogenic properties (with little supporting evidence). A constituent of essential oils from several herbs, including dill and parsley, myristicin has limited insecticidal properties.

Saffron, with its strong yellow colour and subtle smell, is usually reckoned to be the most expensive spice in the world. Known for at least 3000 years, saffron is obtained from the red stigma of the purple Crocus sativa flower by manual harvesting; it takes over 140000 flowers to produce 1 kg of saffron. A little goes a long way, and this is one reason for its use in colouring rice. Its colour and staining ability are a result of the carotenoids crocetin (11) and the related crocin, while its sharp taste comes from picrocrocin (12), and its flavour and aroma from the aldehyde safranal (13). All of these are ultimately derived from zeaxanthin (14) by bio-oxidative cleavage (Scheme 1).8 Saffron has been used to treat depression, but it is not yet known which of these molecules is the active ingredient.

Although not spices, members of the allium family such as onion (Allium cepa) and garlic (Allium sativum) are indispensable in cooking dishes like curries, and have important antimicrobial properties in their own right. They contain significant amounts of non-protein, sulfur-containing compounds, which impart flavour, and yet are present as plant defence compounds.

Intact garlic bulbs are effectively odourless. Break them open and their characteristic smell and their physiological potential are released. When garlic is cut or crushed, (+)-S -2-propenyl-l-cysteine S -oxide (also known as alliin (15)), which is present in the cytoplasm, comes into contact with, and is cleaved by, the enzyme alliinase, which is present in the vacuole. This releases volatile and smelly sulfur compounds, such as allicin (16), which have antibiotic properties (Scheme 2). Allicin is then converted into cis -ajoene (CH2 =CHCH2SOCH2CH=CHS2CH2CH=CH), which has anticlotting (antithrombotic) properties.

Cutting or crushing an onion causes similar reactions, starting from isoalliin to yield the lachrymatory factor (LF), syn-propanethial sulfoxide (CH3CH2CH=SO). This is believed to be the substance that, on contact with the eye, breaks down into irritating substances like sulfuric acid, hydrogen sulfide and sulfur dioxide.

The smell associated with eating garlic or cooking onions is from sulfides and polysulfides, such as H2C=CHCH2SCH3 and CH3CH2CH2-S-S-CH3. In experiments, garlic has been proved to be active against both Gram-positive and Gram-negative bacteria, and to have antibacterial, antiviral, antifungal properties. The use of garlic and onion in the diet appears to be associated with reduced incidence of several types of cancer.9 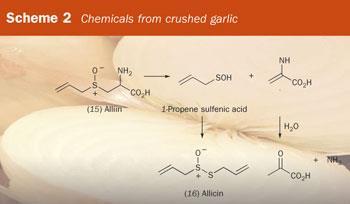 Scientists will continue to uncover valuable compounds in the foodstuffs available to us, and explore their potential. There is little doubt, however, that spices do have health-giving properties, and should be part of a healthy diet.

I am grateful to the referees for a number of helpful suggestions.

Chilli-coated seeds just for the birds

Mammals have the TRPV1 receptor and will avoid chillies.10 Scientists have exploited this 'sensitivity' by developing capsaicin-containing coatings for electrical cables, which deter squirrels, rats and mice from gnawing through them, and for bird seed. Birds do not have the TRPV1 receptor, so capsaicin-coated birdseed is safe for birds to eat while mammals, especially squirrels, will leave it alone. It is possible that chilli plants evolved to produce capsaicinoids as a way to deter predatory mammals, while attracting birds to eat their fruits and disperse their seeds.11 The irritating property of capsaicinoids has seen them put in: pepper sprays, used by the police to immobilise violent people; anti-mugger aerosols; and bear-repellents.