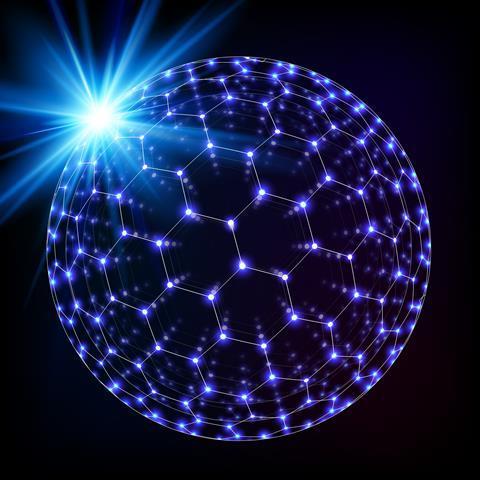 A few years ago the focus of a BBC Horizon programme was the discovery of C60, buckminsterfullerene (buckyball), and the family of similar carbon-cage molecules, the fullerenes. The fullerenes were discovered in 1985 by British chemist Sir Harry Kroto and colleagues in the US. The chemists were doing laboratory experiments designed to probe the chemistry involved when molecules are first created in the atmospheres of cool, red, giant stars, and then ejected into the interstellar medium (ISM) or ‘space’. It was an accidental discovery – a great example of serendipity and led to the award of the Nobel prize for chemistry in 1996.

In these pioneering laboratory experiments, the scientists, using a high-powered laser, vaporised carbon into helium gas, which expanded into a vacuum chamber and cooled – thus simulating the conditions of a star pumping out material into the ISM. They analysed the tiny amounts of material produced using a mass spectrometer. They detected molecules that were known to be in the ISM as well as the totally unexpected fullerenes – in particular, the C60 molecule.

It took five years to find a simple way of making C60 in gram quantities, which was part of my PhD. On the same Horizon programme, I explained my part in this wonderful story. If you create a high temperature electrical spark between two carbon rods you can vaporise carbon. If you do this in an inert gas such as helium, a black smoke is produced, up to 10 per cent of which is made up of C60 and the larger fullerenes. The fullerenes are soluble in solvents such as methylbenzene (toluene) and so can be extracted and purified.

But are there fullerenes in space?

Since the discovery of C60 a common misconception has evolved – ie the molecules were actually discovered in space.

The usual method of detecting molecules in space is by observing their radiowave emission. Molecules with dipole moments – ie ones that are polar, with one end more positively or negatively charged than the opposite end – emit microwaves as they tumble and rotate in the gas clouds (even though they are pretty cold at 20–100 K they still have enough thermal energy to rotate). These feeble signals can be picked-up on Earth by using large steerable parabolic radio dishes with sensitive radio/microwave receivers.

The Horizon programme ended with the speculation that if C60 was in space, it might be responsible for certain unidentified, astronomical emissions and absorptions in the ISM known as the diffuse interstellar bands (DIB). For a while carbon chains seemed a promising candidate but so far neither these nor C60 seem to provide a full explanation.

The symmetry of (pure un-reacted) C60 means that it has no dipole moment so it does not have a radio signature. To measure the infrared, vibrational absorption features of C60, a background infrared source is needed (perhaps from a star or other hot object) but so far the right circumstances have not been observed. The ultraviolet features of C60 are in regions of the spectrum where there are strong signals from other widespread materials in space, so all in all no unambiguous detection of C60 has so far been made.

It is also likely that C60 in space will have reacted with hydrogen (the most abundant element in the universe) or other atoms, thus forming many possible products and complicating matters further. There are, however, carbon rich stars that might be a good source of carbon and also warm enough for infrared investigations and so might be good regions in which to search for fullerenes.