Buckminsterfullerene, C60, is one member of the family of fullerenes, pure carbon molecules that are a cage of carbon atoms. These cages can be closed (buckyballs, fig 1) or open (buckytubes, fig 2). They were first reported in 19851 and were the subject of the Nobel prize for chemistry in 1996.2 In the original experiment when graphite underwent laser ablation, C60 was by far the most prevalent member of the fullerenes, with C70 being the second most abundant.2 C60 contains 12 pentagons and 20 hexagons, fused such that the centres of the pentagons are at the corners of an icosahedron, making buckminsterfullerene a truncated icosahedron. Each of the pentagons shares its edges with adjacent hexagons. 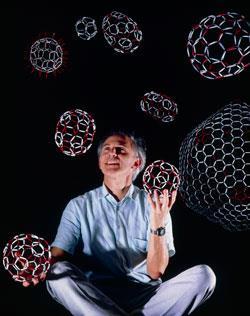 C60 is the smallest buckyball in which none of the pentagons is in contact, ie shares an edge or a corner, with another pentagon. Its structure in three different representations is shown in fig 1, and may also be viewed interactively online.3 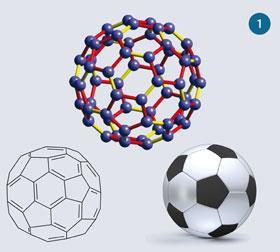 In graphite hexagons fuse into a planar tessellation. It is the pentagons in C60 that cause a bending of the shape out of the plane. Here we show that 12 pentagons are required to close the fullerene cage. We make use of Euler's formula, a characteristic of convex polyhedra: 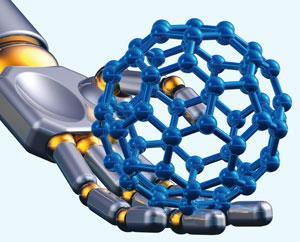 We can use it to help us solve simultaneous equations for a buckyball, ie a convex polyhedron composed solely of p  pentagons and h  hexagons as its faces. From this definition we can say straight away that:

Considering the vertices, it is evident that in any realistic structure a vertex will be shared between three faces. Since each pentagon has five vertices and each hexagon has six:

Using equations (2) to (4)  we can substitute for V, E  and F  in Euler's equation. Multiplying through by 6 to avoid fractions, gives:

Multiplying out the terms, we see that the number of hexagons cancels, leaving us with p  = 12, which we were trying to show.

We are assuming that the buckyballs are purely convex structures, ie structures without dents, where all the dihedral angles around edges are less than 180?. The fact that the number of hexagons cancels mean that closure of the carbon cage can be obtained with no hexagons (as in C20) or with very large numbers of hexagons as is found in the largest buckyballs, eg C100.

where n  is the number of sides of the polygon).

In a buckyball such as C60 or C70, deviation away from the plane is achieved around a vertex that is shared between one pentagon and two hexagons. By considering these three polygons in a net we see that around the shared vertex the angles sum to

This is 12° short of what is required for a planar arrangement.

In constructing the polyhedron from the net this closure of the polygons across the 12° gap causes the vertex to move up into the third dimension. If we consider all five vertices of a pentagon surrounded by hexagons, this makes a total of

of angular defect whose closure causes curvature of the structure. The word 'curvature' is used loosely as deviation from the plane is actually in incremental steps, but considering that buckminsterfullerene is often loosely referred to as spherical, 'curvature' seems quite appropriate. In geometry, Descartes' theorem states that the total angular defect (where each defect is the shortfall from 360° in the net around a vertex) is 720° for a polyhedron that is homeomorphic (ie topologically equivalent) to a sphere.

Since each pentagon contributes 60° of angular defect, the total number of pentagons required is

The equivalence of faces, vertices and edges

One of the strongest pieces of evidence supporting the buckminsterfullerene structure at the time of its discovery was the carbon-13 nmr spectrum, which contains just one peak.4 This implies that all sixty carbon atoms in C60 are in symmetrically equivalent, ie chemically equivalent, environments.

The buckminsterfullerene structure is the only one that satisfies this condition along with chemical valency. It is also the largest buckyball for which this is true (the dodecahedral C20 also contains just a single carbon environment). Each of the 60 carbon atoms is shared between a pentagon and two hexagons.

Plugging p = 12 and h  =  20 into equation 4   we see that there are 90 edges altogether. Since in C60 pentagons are never adjacent to other pentagons 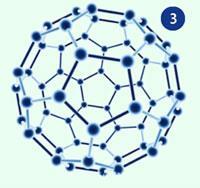 Given the icosahedral symmetry of C60 we can look up the symmetry elements. These include six five-fold rotation axes that pass through the centres of opposite pairs of pentagonal faces. Combinations of rotations around these axes show that all 12 pentagonal faces are equivalent. Given that all the hexagons in C60 are adjacent to pentagons it is easy to appreciate that combinations of rotations around the five-fold axes can also bring any hexagon to the position of any other hexagon in the structure, making all of the hexagonal faces equivalent. Fig 3  shows a buckyball viewed along a five-fold axis.

It has been observed empirically that stable buckyballs are those in which the pentagonal faces are isolated,7 ie not fused with other pentagons. C60 is the simplest buckyball in which all 12 pentagons are isolated. One way to appreciate why this should be so is to consider the instability of pentalene (shown in fig 4), in which two cyclopentadiene units are fused together.

Pentalene has eight ? electrons, which makes it anti-aromatic. It is so unstable that it was not until 1997 that it was successfully isolated and characterised.8

The second most stable buckyball: C70

hexagons. The extra 5 hexagons go around an equatorial plane that defines, perpendicular to it, a unique five-fold axis through the buckyball (there were six five-fold axes through C60 and no unique axis). 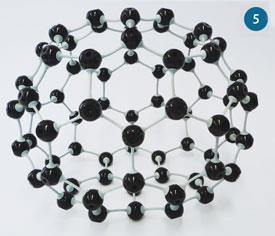 This leaves the buckyball resembling a rugby ball in shape more than a soccer ball, and leaving it with D5h symmetry. The structure is shown in fig 5  with the unique five-fold axis being horizontal.

Some of the difficulties of analysing and comparing three-dimensional structures can be alleviated by considering planar graphs. In these structures the buckyballs are viewed down a five-fold axis, except the pentagon on the bottom face is expanded until is surrounds the rest of the structure with all the other polygons being displayed in the plane. The relative sizes and the shapes of the polygons are distorted but the structure remains topologically, ie graphically, accurate. The planar graph structures of C60 and C70 are shown in figs 6a & 6b. 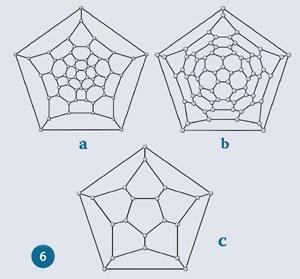 The twelve pentagons in these structures are found in two circular bands of five, leaving one in the centre and the final (bottom) one around the outside of the graph.

The contrast between these two graphs shows us how the symmetry of these two buckyballs differs. While both graphs clearly display five-fold symmetry we can see that a line drawn from a corner on the outer pentagon to the centre of the C70 graph passes through pentagons in both the internal groups of five. In the C60 graph, such a line passes between two pentagons in the internal group of five closest to the centre. If a C60 molecule is cut in half so that each half has an end pentagon and a band of five, the pentagons in the bands of five of each half of the molecule are related to each other by a rotation of 36? (a tenth of a complete rotation) about the axis that passes through the end pentagons. To obtain C70 from C60 one of these halves is rotated by 36? so that these pentagons line up. Where the pentagons line up there is a hexagon between them, preserving the pentagon isolation rule (discussed above). Between the pentagon-pairs there is space for two hexagons in the gap. Around the ring there are five of these gaps between the five pentagons; these extra five hexagons is what takes the hexagon count up to 25 for C70.

Figure 7 - An equilateral triangle whose corners are truncated, removing a third of the length of each edge leaves a regular hexagon. This shows how hexagons arise from the truncation of the corners of the icosahedron, which has 20 equilateral-triangle faces

Two polyhedra are dual when the centres of the faces of one of them connect to make the corners of the other. As a result the number of faces and vertices are exchanged between pairs that are dual. In this way, the cube (6 faces, 8 corners) and octahedron (6 corners, 8 faces) are duals of one another. Similarly the dodecahedron (12 faces, 20 corners) and icosahedron (12 corners, 20 faces) are duals. The simplest buckyball, C20, is a dodecahedron. Its planar graph structure is shown in fig 6c.

It is evident from the shape of the dodecahedron that connecting the centres of adjacent faces gives a 12-cornered polyhedron with 20 equilateral triangles for faces. It follows that truncating the corners such that one third of each edge is removed, leaves 20 regular hexagons in the place of the original 20 equilateral-triangle faces. This is shown in fig 7.

The polyhedron resulting from such a truncation of the corners in an icosahedron is that of buckminsterfullerene.