Traditionally, vaccines are derived from the remnants of whole organisms which prime the body against future attack by an invading pathogen. The design and development of synthetic vaccines offer a more systematic approach to vaccine therapy for illnesses such as meningitis and cancer, and even drug addiction.

Synthetic chemistry has advanced to the stage where it seems that very few molecular entities cannot be made in the laboratory. These advances have resulted in opportunities for medicinal chemistry and related chemical sciences that sit at the interface with other disciplines. This article explores the impact synthetic chemistry is having at the biological interface, in therapeutic vaccine research. 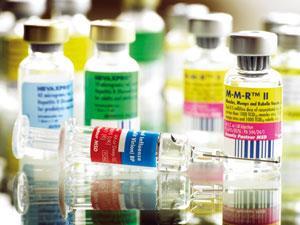 Tomorrow's vaccines - designed and made in the lab

Vaccines contain the inactivated part of a disease-forming microorganism (or antigen) that stimulates the immune system into recognising the invading organism as 'foreign' and produces antibodies that attach to the antigen and not only destroy it but also remember it for future exposure. Fragments of the pathogen can also be used as vaccines and, at the molecular level, those parts of a macromolecule that are recognised by the immune system are called epitopes. In general, antigens and epitopes are made up of proteins or polysaccharides. 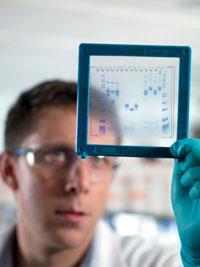 Electrophoresis gel being studied by a researcher

The problem with many vaccine therapies, however, is that they contain a complex mixture of biologically active proteins and polysaccharides that can have different therapeutic effects in different people, and in some patients may even be toxic.

A well-defined synthetic vaccine is an attractive alternative to traditional approaches because it offers a potentially more consistent therapy. In the design of a new vaccine, chemists will look to exploit the relationship between the chemical structure of the vaccine and its therapeutic activity to produce new and improved compounds.

We now know that the immune system doesn't respond to molecules with a molecular weight less than about 10,000. So to create a synthetic vaccine, any molecule below this limit must be covalently linked (bioconjugated) to a carrier protein to elicit a reproducible immune response. In the synthesis of such a conjugate, the chemist will optimise the reaction conditions (temperature, concentration and catalysts) to improve yields, and will use purification techniques to obtain a well-characterised chemical entity.

In general, to confirm the identity and purity of their vaccine chemists use mass spectrometry with a 'soft' ionisation technique, such as matrix-assisted laser desorption ionisation (MALDI). The matrix is used to protect the relatively fragile biomolecule from being destroyed by the laser, which vaporises and ionises the conjugate.

Gel electrophoresis can be used to analyse synthetic vaccines. In this method an electric current moves different biomolecules (such as proteins) through a polymeric gel at different rates depending on their charge, size and shape. A protein carrier will move through the gel at a different rate than the carrier that is conjugated with. 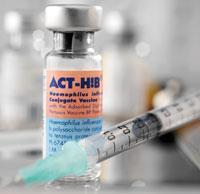 The HiB vaccine - active against ­­meningitis

One of the best known conjugate vaccines is Haemophilus influenzae type B (Hib) vaccine, which has significantly reduced the number of cases of childhood meningitis to the extent that this is no longer a public health problem in Europe or the US. Early versions of the vaccine simply used the purified, bacterial polysaccharide, polyribosylribitol as an antigen, but this was removed from the market owing to a lack of efficacy in children less than 18 months of age. This problem was resolved when the polysaccharide was conjugated to a carrier protein, resulting in a reproducible immunogenic response in young children.

In recent years, chemists have turned their attention to developing carbohydrate-based antitumour synthetic vaccines. These rely on the fact that cancer cells have unusual glycosylation patterns on their surface, and therefore a vaccine that is able to present these aberrant sugars effectively to the immune system should be able to generate an immune response to these tumours. 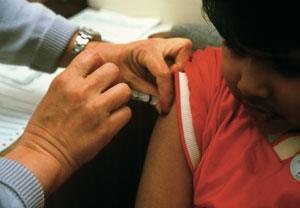 Samuel Danishefsky and his group at the Sloan-Kettering Institute in New York, US, have led the way in this field by synthesising complex vaccine candidates for development.1 This pioneering work led to the Globo-H-KLH synthetic vaccine (1) currently being evaluated in clinical trials for the treatment of prostate cancer. (KLH = keyhole limpet haemocyanin, a carrier protein.)

Globo-H is a sugar found on many different tumour cells but can only be isolated in very small quantities (unlike the Hib vaccine where polyribosylribitol can be isolated from cultured bacteria). The ability to prepare this complex carbohydrate using differentially protected saccharide monomers is a significant synthetic achievement, and the synthetic oligosaccharide confirmed the structure originally assigned to the natural Globo-H antigen.2 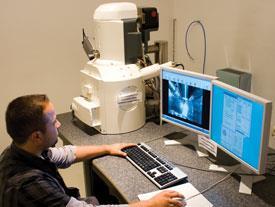 Danishefsky has recently gone further and designed and synthesised vaccine candidates, eg (2). These have multiple carbohydrate cancer antigens on a single oligopeptide backbone which, it is hoped, will take into account the intrinsic heterogeneity of carbohydrate surface antigens present on cancer cells. 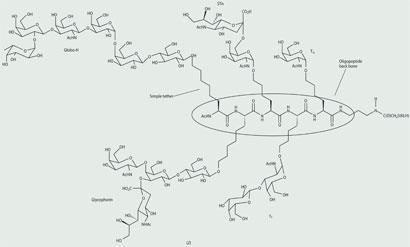 These highly complex synthetic vaccines are made using solid-phase peptide synthesis - each sugar is tethered to an amino acid (bearing a protecting group on the amino function) that can be linked to a polymeric resin bead. The amino group can be deprotected, ready for peptide formation with another sugar-linked amino acid, and the process repeated until the desired peptide sequence is achieved, which can then be cleaved off the resin and conjugated to the carrier protein.

Peter Seeberger at the ETH in Zurich (Swiss Federal Institute of Technology Zurich) has developed an automated solid-phase synthesis technique that significantly speeds up the preparation of complex oligosaccharides.3 His group has used this apparatus to prepare a branched tetrasaccharide (3) that is made on the surface of a protozoan parasite, which causes leishmaniasis, a deadly disease, spread by the bite of a sandfly, that affects more than 12 million people worldwide.4 The sugar antigen was conjugated to a virus-like particle (a virosome), which is devoid of the genetic material of the virus but nevertheless elicits an immunogenic response. This synthetic vaccine construct is currently being investigated for efficacy against leishmaniasis disease. The automated technique speeded up the synthesis of this saccharide from one week (manually) to just nine hours. 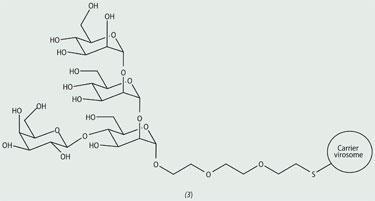 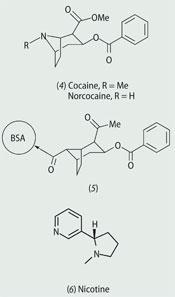 Antigens can also be small molecules, with a molecular weight < 1000. These are referred to as haptens and can also be conjugated to a carrier protein to elicit an immune response. Several research groups, for example, are investigating synthetic vaccines for cocaine (4) and nicotine (6) in the fight against drug addiction.

Kim Janda at The Scripps Research Institute in California, US, is using specific antibodies to sequester these harmful drugs from the bloodstream.5 The formation of an antibody-drug complex would prevent the drug from crossing the blood-brain barrier, thus inhibiting the effects of the drug on the central nervous system. 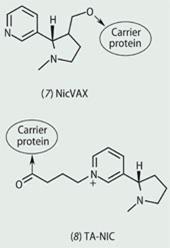 Building on this work,6 Barbara Fox and coworkers at ImmuLogic in Waltham, Massachusetts, US, conjugated a minor metabolite of cocaine - norcocaine - to a carrier protein, bovine serum albumin (BSA, 5).7 Mice immunised with this construct had a lower concentration of cocaine in the brain following cocaine administration. Celtic Pharma is currently developing this vaccine in clinical trials for the intramuscular treatment of behavioural changes associated with cocaine addiction.

Success with cocaine vaccines has led other chemists to design nicotine vaccines as an aid to stop smoking. Several nicotine haptens, with linker attachment locations, have been synthesised and there are currently three in clinical trials - NicVAX (7) by Nabi Pharmaceuticals, NicQb by Cytos Pharmaceuticals and TA-NIC (8) by Celtic Pharma.

The advances in synthetic and analytical chemistry, combined with our greater understanding of the immune system, has resulted in some fascinating approaches to synthetic vaccines. It is an area that sits at the interface of chemistry and biology and will profit from a greater multidisciplinary effort in the future.