How do you (or someone else) clean your dirty clothes? No doubt in the washing machine with shop-bought detergent. But what if the clothes were family heirlooms, like your great grandparents' wedding outfits? These are unlikely to be washed in the same way as your everyday gear and instead would probably be washed by hand with special 'gentle' detergent or taken to the dry cleaners. 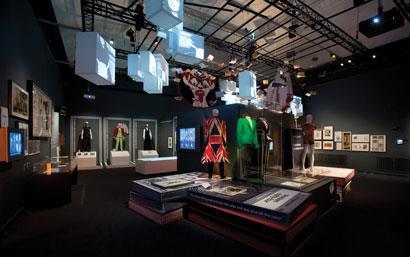 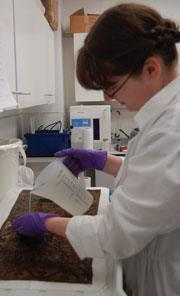 Why the special treatment? Well, for one thing, the outfits have been kept for a long time, probably 80 years or more, and the fabrics will have aged and become fragile. The mechanical action of the washing machine and the chemical strength of today's commercial detergents would prove too harsh for the fibres and physically damage them. These vintage clothes are also heirlooms, part of your family's history. If they become damaged, they can't be replaced easily, if at all.

Imagine, then, the responsibility of a conservator whose job it is to preserve and care for a collection of historically important textiles, say in a museum or historic house. How do they clean these precious artefacts and, just as importantly, why?

Textile conservators make these decisions by calling upon their chemical understanding of aged textile materials and the cleaning process, taking calculated risks whether to clean or not, and, if so, to choose the right cleaning method. The chemistry of the fibres and any dyes present, the properties of the detergent or solvent, the quality of the water, the pH of the cleaning process and the history of the artefact all need to be carefully considered for the decision.

Most historic textiles are made from wool, silk, cotton and linen. The fibres of wool and silk are protein polymers (keratin and fibroin respectively), while those of cotton and linen are cellulose. All of these fibres become weak when their polymers undergo chemical changes that cause intermolecular bonds between the polymer chains to break.

A very damaging reaction is photo-oxidation involving oxygen, uv light and radicals because it affects the intramolecular bonds in the polymer 'backbone' of protein and cellulose fibres. Cotton, silk and wool are all badly affected.

The resulting effect on cotton is that it becomes yellow because of the chromophoric carbonyl, carboxyl and hydroperoxide groups that form from the radical products, and weaker because the polymer backbone is broken and the polymer chains shorten. The free radicals cause further and rapid autocatalytic degradation, making the textile severely degrade in a short time. A similar process happens to the peptides in the fibroin and keratin polymers.

Before we look at the cleaning process itself, there is an important question to ask - why do historical textiles need to be cleaned?

One reason is the deposition of airborne dust, pollutants and particulates from the environment. For example, a tapestry hung in a stately home two hundred years ago would have been exposed to acidic nitrous or sulfurous pollution from the smoke of coal or wood fires.

Another reason is the deposition of damaging substances from wear and use. A common soiling for costumes is uric acid from underarm perspiration, which if left for a long time on the textile will cause the fibres to break down. In these instances, the dust and soiling are damaging to the fibres through oxidation and hydrolysis reactions. Oxygen in the air and high energy uv radiation and radicals also have a role to play in the degradation of aged fibres by photo-oxidative reactions, resulting in acidic and autocatalytic degradation products

These reasons explain why conservators remove the dust, soilings and fibre degradation products because they are damaging to the textile structure. However, if the dirt on Charles Darwin's coat was found to relate to dirt in its seams and pockets, or there were traces of blood on the clothes of a famous assassinated person, the conservator would not want to remove these because they are historical evidence.

Conservators often have to put chemistry into an historical context as well as a scientific one to make certain decisions about whether to clean or not. Sometimes the textile is simply too degraded and weak to withstand the cleaning process even though leaving it in its present state might lead to further degradation. 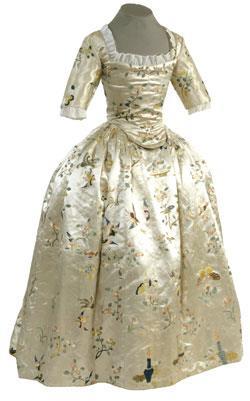 For collections with old and modern textiles, like the V&A, conservators put as much thought into preservation decisions for acquired and displayed pieces from today's designers as they do for a Chinese silk dress from 1760

Conservators use the term 'wet cleaning' when a solvent of some kind is involved. The solvent can be aqueous, either water on its own or with a detergent or cleaning aid in it, or an organic solvent like industrial denatured alcohol. Organic solvents are useful when the dirt is greasy in nature or the textile has water-soluble dyes that run in aqueous solvents.

Before deciding which to use, the conservator carries out a series of simple but crucial tests by pressing small individual pieces of acid-free blotting paper wetted with a range of polar and non-polar organic solvents and water onto small, discrete areas of the textile. The conservator then visually assesses which solvent removes the most dirt without obvious damage to the fibres or loss or change of colour, and makes their choice this way.

You might think that choosing an aqueous cleaning method is the simplest option, but in fact it is the most complex chemically. First the tap water needs to be purified by a deioniser that removes soluble inorganic magnesium, calcium and sodium salts. The deioniser works by passing the tap water though ion exchange resins made of polystyrene. This purification process is important because the salts reduce the effectiveness of detergents and, when dried, form abrasive crystals on the already delicate fibres.

Then there is the detergent itself. A detergent needs specific chemical properties to do three necessary things when it cleans. Firstly it has to attach itself to the dirt, which might be greasy or water-soluble. Secondly it needs to overcome the bonds between the dirt and the fibre to draw it away from the fabric surface. Thirdly it must suspend the dirt in water so that it can be washed away.

Detergents have a distinctive organic molecular structure. One end of the molecule is nonpolar and hydrophobic, typically a chain or ring of 10-20 carbons atoms. The other end is a polar hydrophilic group, either ionisable like a carboxyl (-COO-) or with multiple functional groups like ethers (-C-O-C-).

Anionic detergents are made from fatty alcohols from petrochemicals or synthesised from fatty acids. They ionise in water:

Non ionic detergents are made from petrochemicals. They do not ionise in water.

These detergents are in commercial washing powders, but textile conservators can't use these products because of the additional chemicals in the formulation which would or could damage weak historical textiles, like oxidising bleaches, enzymes for stain removal, and 'softeners' that deposit a lubricating or anti-static chemical layer on the fibre.

Even traditional soap flakes sold for hand-washing are avoided because they form a grey scum with soluble calcium and magnesium in water that then becomes deposited deep into the fibres and is difficult to remove.

The conservator chooses between anionic or non-ionic detergents depending on the type of fibre to be cleaned. Anionics work best in slightly alkaline conditions, around pH 7.5, which suits the cellulosic fibres but not silk and wool which are susceptible to degradation. (See Alkaline hydrolysis.)

For wool and silk, the conservator would choose non-ionic detergents that work best in slightly acidic conditions, around pH 5, and can be more easily rinsed out. A suspending agent like sodium carboxymethylcellulose can be safely added to hold the dirt in solution to make removal more efficient.

The polypeptide chains in wool and silk form intermolecular 'salt-bridge' links through hydrogen bonding and electrostatic interactions between charged carboxylic and amine groups:

In aqueous alkaline solutions, the amine cations become neutral which disrupts the salt bridge, causing the polymer network to breakdown. 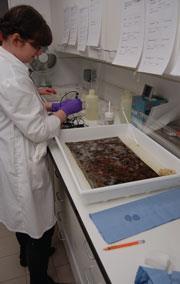 Frequent pH testing with non-bleed indicator strips or a meter enables the conservator to maintain the right conditions for an effective aqueous wet cleaning treatment that does not damage the aged historical textile. In this case, where a nineteenth century dyed textile is being cleaned, the conservator also remains alert for colour bleed

Ideally the pH of the washing process should remain close to neutral throughout the treatment to maximise the efficiency of the detergent and to protect the aged fibres from further degradation. In reality, the pH changes several times during the process as dirt, soilings and fibre degradation products are released into the solution. These are carefully washed away with a few changes of fresh detergent solution and a final rinse with plenty of clean deionised water.

A very dirty or degraded textile can take make the pH as low as pH 2 if, for example, if nitrous or sulfurous pollution products are solubilised, or increase the alkalinity to pH 8 if soluble amines are released from degraded wool or silk. If sustained, these conditions would cause acid or alkaline hydrolytic degradation of the fibre polymers, resulting in a weakened and damaged textile.

Changes in pH can also cause dyes to bleed or change colour. The conservator therefore needs to monitor and control the pH throughout the process to minimise damaging hydrolytic reactions and dye bleed as well as ensuring that the detergent releases and suspends damaging compounds without re-depositing them back onto the textile.

Buffering agents are very useful additives to the wash solution because they stabilise pH by controlling the concentration of hydrogen ions H+ and hydroxyl ions - OH. The addition of a dilute solution in the order of 1 g dm-3 is often all that is needed to maintain pH when low concentrations of acidic or alkaline compounds are released and solubilised during the treatment. Acetic acid, citric acid and the salts trisodium citrate and ammonium hydrogen carbonate are four common buffering compounds used by textile conservators (See Buffering agents). 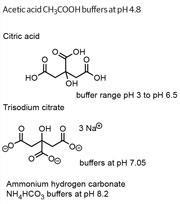 Buffering agents are weak acids, weak bases or the salt formed from the reaction of a weak acid with
a weak base, and all of them partially dissociate
in water.

After the final rinse, the conservator will carefully and quickly dry the textile and gently reshape it to reduce mechanical tensions on the fibre. After all that effort, they will want the clean textile to remain as dust free as possible. If you go into a museum store, you will find all textiles, cleaned or not, carefully packed in acid-free tissue paper and boxes, or protected with covers made from inert materials like polyethylene Tyvek.

Handling is kept to a minimum and only done with clean washed hands. When the textiles go on display, the exhibition areas are as free of pollution and dust as possible, with filters and blinds on windows to cut out uv light. While you might not go to quite the same lengths to protect your family's textile heirlooms, you might like to spare a thought when you are next at a museum or hear about an exhibition for the conservation chemistry going on to preserve our heritage.

Anita Quye is a lecturer in conservation science at the centre for textile conservation and technical art history, school of culture and creative arts, University of Glasgow, UK