The chemistry of self-healing polymers

A familiar example of a system with self-healing ability is the human body. But could an analogous strategy be used for the self-repair of polymeric composites? 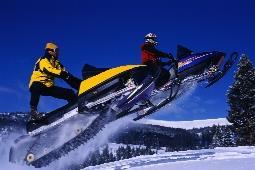 Snowmobiles - an application for self-healing polymers

Composites are materials that are composed of two macroscopic phases. In the case of polymeric composites such as fibreglass, they usually comprise glass or carbon fibres for strength and a polymer phase surrounding the fibres. This polymer is usually an epoxy or polyester resin that cures to form a densely cross-linked polymeric network of covalent bonds. The cross-linking provides properties such as stiffness and strength as well as resistance to solvents or other chemicals. Polymer composites, however, are susceptible to cracking and delaminating (ie when the cured resin de-bonds from the fibres), which are difficult to detect and repair. By making this repair automatic, the materials would have extended lifetimes, thus making their products - from structural applications, through adhesives and microelectronics used in mobile phones, to medical implants - safer and more reliable.

The strategy used for this self-repair is shown in Fig 1. Microcapsules filled with liquid monomer are dispersed in an epoxy matrix like those used in polymeric composites. A catalyst that induces polymerisation of the encapsulated monomer is embedded in the epoxy. When a crack runs through the cured material, it breaks open the micro- capsules. Capillary action draws the monomer into the crack where it is exposed to the catalyst and thus polymerises. The polymerised material binds the two faces of the crack together. The material thus heals itself in response to damage.1

A chemistry that meets these requirements remarkably well is the ring opening metathesis polymerisation (ROMP) of dicyclopentadiene (DCPD), catalysed by Grubbs' catalyst (Scheme 1). Metathesis is a reaction in which two compounds with a similar functional group (usually a double or triple bond) exchange the components on each side of the bond to give new compounds (ie A-B + C-D → A-D + C-B). Dicyclopentadiene is an inexpensive monomer that readily undergoes metathesis and is available as a liquid at room temperature. It has low viscosity and flows easily out of the microcapsules, yet it also has low enough volatility to remain in the crack and polymerise before evaporating. DCPD also has a long shelf life, owing in part to its relative insusceptibility to radical polymerisation. All these properties are critical for successful self-healing.

Figure 2 (a) - Dyed microcapsules containing DCPD before being ruptured

Figure 2 (b) - Dyed microcapsules containing DCPD after being ruptured

Another benefit of DCPD is its compatibility with the conditions used for microencapsulation in poly(urea-methanal). This process involves suspending the DCPD as small droplets in a rapidly stirred, acidic solution of urea in water. Methanal is then added and the mixture is heated to 55°C.2 This causes a thin shell of poly(urea-methanal) to form around the DCPD droplets, thus encapsulating the liquid. The resulting microcapsules can then be filtered and dried to give a free-flowing, coarse powder. As seen in Fig 2, the capsules release a significant amount of DCPD when they are ruptured. However, they are sufficiently robust to be incorporated into the epoxy resin without bursting.

There are several catalyst systems, based on W and Mo complexes, that have been developed over the past three decades for the ROMP of DCPD and, as a result, polyDCPD has rapidly become a commercially important material, especially in moulding large parts for trucks, tractors and snow mobiles. One of the key reasons for the success of polyDCPD is its extreme toughness. The strained norbornene-like double bond reacts nearly quantitatively in ROMP, while the second, less strained cyclopentene ring opens on a fraction of the monomers to create a densely cross-linked material that is resistant to fracture (Scheme 1).3

The catalysts that were initially used for the ROMP of DCPD all have one major drawback that has prevented their use in self-healing. They decompose in minutes or less when exposed to air, which greatly complicates the preparation of self-healing composites. Fortunately, the recently developed ruthenium alkylidene complexes - ie Grubbs' catalysts - are capable of performing ROMP without the need to protect them from water or air.4 The ROMP of DCPD catalysed by Grubbs' catalyst is rapid at room temperature and there is no need to control catalyst concentrations. This is an ideal reaction for self-healing. 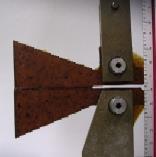 The self-healing materials were originally prepared by mixing DCPD-filled microcapsules and crystals of Grubbs' catalyst in an epoxy resin. The resin was then loaded into a silicone mould to create a sample with a tapered, double-cantilever beam geometry (Fig 3). The mould forms a groove in the centre of the sample to direct crack growth during testing, and the tapered shape is specifically designed so that the fracture toughness can be measured without taking into account the distance that the crack propagates in the sample.5 The testing begins by propagating an initial crack to measure the fracture toughness of the virgin material. The crack faces are brought back together and the sample is set aside to heal for at least 24 hours. It is then fractured again to determine how much toughness has been recovered.6 The toughness of the healed sample divided by that of the original sample is defined as the healing efficiency.

Our initial materials showed significant fracture-toughness recovery, and healing efficiencies of up to 90 per cent could be achieved. However, to heal well, we had to include 2.5 wt per cent catalyst (relative to the epoxy), a catalyst loading requirement that is much higher than what would be expected based on the concentration needed to polymerise pure DCPD in non-self-healing situations. Since Grubbs' catalyst is relatively expensive, this high loading makes the material prohibitively costly.

To reduce the amount of catalyst needed, we had to determine why such high loadings were required. One reason could be that the amine curing agent for the epoxy resin destructively attacks the Grubbs' catalyst. By adding a large amount of catalyst, some of it survives this attack, but a significant amount is also lost in the process. Another problem is that the Grubbs' catalyst crystals tend to aggregate rather than disperse throughout the epoxy (Fig 4 (a)), and this creates relatively large regions that have no catalyst present. We concluded, therefore, that higher loadings of catalyst must be added to get sufficient distribution of the catalyst throughout the sample.

We overcame both problems by protecting the Grubbs' catalyst in wax microspheres.7 To form these microspheres, a hot mixture of the catalyst in molten paraffin wax is prepared, and this mixture is poured into hot water. Rapid stirring of this biphasic mixture produces small droplets of molten wax containing the catalyst particles. Cold water is then added rapidly to solidify the wax. This process produces spheres with diameters of the order of hundreds of microns. To determine how much of the catalyst's reactivity is lost as a result of the heat, air, and water involved in the encapsulation process, we dissolved and tested a sample of these wax microspheres and found that more than 90 per cent of the reactivity is preserved. This is an excellent illustration of Grubbs' catalyst's remarkable stability under ambient conditions.

The wax-encapsulation strategy is only a minor change from the original self-healing material, but it is a cheaper process. Perhaps more importantly, this strategy also allows different chemistries to be used that are not possible without wax protection. For example, many materials employ a vinyl ester resin which is cured through radical polymerisation initiated by peroxides, and it would be desirable to develop a self-healing system that is compatible with these vinyl ester resins. Unfortunately, peroxides react with Grubbs' catalyst, making it impossible to prepare self-healing materials with unprotected catalyst. However, by protecting the catalyst with a wax coating, the interaction between the peroxides and the catalyst can be avoided. A self-healing material based on vinyl ester resins is being developed using this wax-protection technique.

In addition to providing the possibility of using different matrix materials, wax-protection also allows different catalysts to be used. Because of the benefits gained from wax-protection, it may be possible to use ROMP catalysts that are less expensive and more readily-available than Grubbs' catalyst, but that suffer from less stability. Work is currently focusing on a tungsten-based catalyst in a self-healing material that will be more commercially viable in large-scale applications.

While ROMP has proven to be an excellent chemistry for self-healing, other chemistries are also being investigated. A self-healing material using an entirely different strategy which requires no catalyst or microcapsules has recently been developed.8,9 This material is based on a reversible polymerisation using Diels-Alder reactions of multifunctional furan and maleimide monomers (Scheme 2). When the monomers are mixed, heated, and cooled slowly, the Diels-Alder reactions go nearly to completion, and a cross-linked material is formed with physical properties similar to those of common structural epoxy or polyester resins. However, these Diels-Alder reactions are reversible under certain conditions, and when a crack propagates through this material, retro-Diels-Alder reactions occur to regenerate the furan and maleimide groups. If the fractured sample is clamped together and heated, the Diels-Alder reactions occur again to mend the crack efficiently via covalent bonding. An attractive feature of this material is that the same sample can undergo multiple fracture-healing cycles with almost no decrease in the healing efficiency. A limitation of this chemistry, however, is that the fractured sample must be heated for healing to occur. 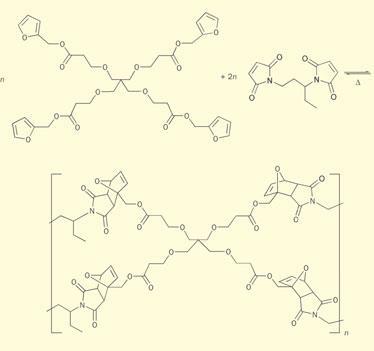 An alternative healing chemistry is being developed in our labs for use in polymeric bone cement.10 This cement is a putty or paste-like substance composed of methyl methacrylate (methyl-2-methylpropenoate) and poly(methyl methacrylate) that can be solidified by adding peroxides and other activators. It is used to fix implants to the native bone, but it has the potential to fracture, and this failure can lead to further surgery for the patient. If self-healing bone cement could be used, these cracks would be able to repair themselves, and invasive treatment and patient discomfort could be avoided. However, because of the sensitivity to toxins of the in vivo environment in which bone cement is used, an alternative to the ROMP system must be used. The same radical polymerisation of methyl methacrylate that is used to cure the bone cement is a good option for self-healing because it meets the demands of the in vivo environment. Progress is being made toward using encapsulated methyl methacrylate and embedded peroxide initiators to achieve biocompatible healing of bone cement. While the ability to prepare self-healing materials has now been demonstrated, the key to making these materials perform effectively while remaining practical will lie in the ability to develop polymer chemistries.