The Chemistry Olympiad – miss it, miss out

The international final of the Chemistry Olympiad - a chemistry competition for sixthformers - was held this year in Taiwan. Some 225 students from 59 countries took part in this prestigious event, which lasted for 10 days. Round one is the first step of the journey. 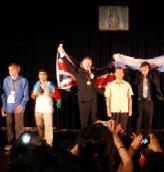 Olympiad competitors from across the world celebrate their achievements

Each year, the Royal Society of Chemistry (RSC) organises and funds round one, which starts the selection process for the four students who go on to represent the UK in the International Chemistry Olympiad final. The RSC is keen to encourage as many students as possible to take part in this round, which is a challenging but enjoyable test of chemical knowledge and is an event in its own right. Round one is open to all UK upper sixth students. Gold, silver and bronze certificates are awarded, and the top 50 students are given book tokens.

Round one - what's involved

Round one consists of a two-hour written paper taken at the students' own institutions early in the spring term (January-February). The paper, prepared by the UK Chemistry Olympiad Committee, is designed to promote chemistry as a relevant and exciting subject. Teachers can submit any number of papers for consideration for certificates but only the top five candidates from any institution will be re-marked by the committee for possible selection for round two. This year, around 1000 candidates from over 300 schools sent in scripts and there was a good distribution of marks - more than half of the students who entered gained a certificate, and there was also an encouraging number of good quality scripts from students in the lower sixth. Box 1 outlines the timetable for the UK rounds to the Chemistry Olympiad.

Some recent round one questions have included the chemistry involved in ant bites, self-heating drinks, 'tin disease', radioisotope-based satellite heaters and thermal generators, pollution at the Taj Mahal, Agent Orange, supernovae, and 'Nanoputian' molecules. A good example of a previous round one question, which appeared in the 2003 paper, is the synthesis of Rohypnol (see Box 2). This is a synoptic question which draws together many simple reactions and puts them into a real, contemporary context.

Box 2 - Synthesis of Rohypnol (extract from round one question, 2003)

Rohypnol is a trade name for the compound flunitrazepam whose structure is shown in the scheme below. It is a controversial sedative which has been misused to 'spike' people's drinks. Draw the structures for the reagent phenylhydrazine and compounds A to L.

The synthesis steps to Rohypnol include radical halogenation, the nucleophilic substitution of bromide by cyanide, the hydrolysis of a nitrile (cyanide) to give an acid, the formation of an acid chloride using thionyl chloride, a Friedel-Crafts reaction and phenylhydrazide formation. These reactions form the first half of the synthesis. It is unreasonable to expect any student to predict the outcome of the Fischer-indole synthesis, and so this is given. The synthesis then continues with an ozonolysis (plus a clue to what is involved in this step) to form an amide. The amide is hydrolysed to give an amine and this, in turn, reacts with an acid bromide to form a new amide. After the substitution of a bromide by ammonia, a condensation reaction yields the tricyclic skeleton precursor of the desired product. The final steps are a classic aromatic nitration and the methylation of a secondary amine.

Some of these steps are tricky and require the careful application of a candidate's chemical knowledge. While some of the reactions are, sadly, no longer included in many A-level or similar specifications, the formulae of all the intermediate products are provided, together with the structures of the starting material and the phenylhydrazide. Good candidates realise that they can work backwards from the structures of the products of both the Fischer-indole synthesis step and the final product itself. Students simply need to apply some basic functional group chemistry and understand that these groups can be manipulated while leaving the carbon backbone intact. These same strategies prove effective for solving many problems of this type. This initially formidable-looking question was well attempted by many of the round one candidates in 2003. (This question and others from round one Olympiad papers could provide a valuable resource for teachers.)

Round one papers always include questions which illustrate how chemistry is relevant to the world in which we live. From the responses of teachers so far, it would appear that many students enjoy the challenge presented by these papers and many perform well on questions which involve unfamiliar contexts and ideas. Teachers have commented that round one questions stimulate much debate on, and enthusiasm for, the subject. This is the aim of the Chemistry Olympiad competition - to raise awareness of what chemistry is all about and to give students the chance to test the extent of their knowledge and understanding of the subject beyond the requirements of the examination specifications. Tackling the round one paper should be seen as an opportunity to enhance teaching and learning, because the skills required are very much those that are needed for university and beyond.

For me round one was a last-minute experience. This was the first year my school had entered, and though I had not done any preparation I'm glad I took part. Round one questions are tricky, but at least they are different. 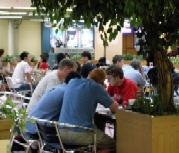 The format of the International Chemistry Olympiad has remained essentially unchanged over the years. The students compete as individuals, taking a five-hour theory paper and a five-hour practical test. The level of chemical theory or practical task varies from that expected to be covered by the majority of post-16 courses (designated 'Levels 1 & 2') to the kind of chemistry met in first-year, bordering on second-year, degree courses (Level 3). The host country's Olympiad exam committee selects topics from the Olympiad syllabus and publishes a booklet of preparatory problems similar to those it intends to use in the actual competition. Worked examples of any questions that the host country intends to set at Level 3 must be included in this booklet.

The theory exam usually encompasses a wide range of topics under the headings of physical, organic, inorganic, and theoretical chemistry as well as biochemistry, analytical chemistry and instrumental methods for structure determination. The practical exam is likely to include a synthesis plus qualitative and/or quantitative exercises. In this year's final, for example, the practical exam involved the synthesis of racemic D,L-phenyl- glycine from benzoylformic acid followed by the enantiomeric resolution of the product plus the identification of unknown inorganic samples by using chemical spot tests and simple electrolysis experiments (see Box 3). Students have five hours to complete the experiments which means they need to plan their work carefully. The students are tested on their ability to perform experiments accurately as well as do calculations and interpret data.

The exams usually include at least one question of 'local interest' - a question connected in some way to the host country. This year the theory paper included a question about the chemistry involved in gold extraction, the link being a town in northeast Taiwan called Chiufen, often referred to as the 'Gold Capital of Asia' (see Box 4).

Chiufen, the old mining town located within the hills in northeast Taiwan, is a place where you can really experience Taiwan's historical legacy. It was the site of one of the largest gold mines in Asia. Accordingly, Chiufen is often referred to as the Gold Capital of Asia. The compound KCN is traditionally used to extract gold from ore. Gold dissolves in cyanide (CN-) solutions in the presence of air to form Au(CN)2-, which is stable in aqueous solution.

Draw a structure for Au(CN)2- showing the spatial arrangement of the atoms. How many grams of KCN are needed to extract 20g of gold from ore? Show your work.

It's not all hard work

Although the International Chemistry Olympiad primarily sets out to test the students' abilities in solving chemical problems, the event also encourages cooperation, understanding and friendship among the participants from the many different countries. All who take part have the opportunity to meet other chemistry enthusiasts as well as to experience the scenery, culture and history of the host country. After the opening ceremony, the students are separated from their mentors and follow their own programme of visits and socialise with the other students . in between sitting the exams.

The mentors (and scientific observers) also have the opportunity to see the sights and socialise but a good proportion of their time is taken up by lab inspections, lengthy 'jury sessions' to agree on the final version and wording of the question papers, translation sessions, proof-reading, marking and arbitration (to agree on the final marks awarded to the students). Although the working language of the competition is English, mentors from each country translate the papers into their own language. Students and mentors are accommodated in different venues and are not able to communicate until after the exams are completed.

The competition ends with a grand prize-giving ceremony and banquet. Although mentors know the marks awarded to their own students, no-one knows what medals have been won until the awards ceremony. The top 10 per cent of students are awarded gold medals, the next 20 per cent get silvers and the following 30 per cent, bronze medals. Students needed to achieve at least 90 per cent to win gold, 80 per cent for silver and 65 per cent for bronze in this year's competition. The 2005 UK team brought home one gold medal and three bronze medals, continuing the success of previous teams (see Educ. Chem., 2005, 42 (5), 115).

In 2009, to coincide with its 800th anniversary, the University of Cambridge will be hosting the 41st International Chemistry Olympiad. This will give the UK an opportunity to demonstrate the best of what this country has to offer - in the chemical sciences, in education, and in industry and technology.

Acknowledgement: I thank Dr Peter Wothers, teaching fellow in chemistry at the University of Cambridge and a member of both the UK Olympiad Committee and the International Olympiad Steering Committee for his useful comments on the Rohypnol question.

Kay Stephenson is assistant education manager, schools and colleges, at the Royal Society of Chemistry, Burlington House, Piccadilly, London W1J 0BA. She attended the 2005 International Chemistry Olympiad as a scientific observer with the UK team.