The drink of the Gods

Unlike any other living organism, fungi contain unique and potentially toxic organic compounds - mycotoxins - which can be taken up from the environment or synthesised within the fungi itself.1 Despite this, over the centuries, Man has sought to exploit the pharmacological effects of the compounds they contain. 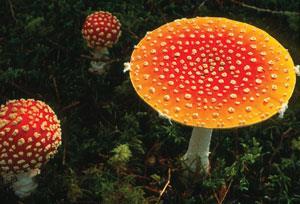 The earliest written reference to the consumption of fungi as a medicine, rather than a food, is within the Sanskrit hymns contained in Rig veda, which forms a part of the oldest sacred texts of Hinduism, the Vedas. In one of the hymns (Book 8, hymn 4, stanza 3) 'Soma' is described as an inebriating ritual drink, which was thought to infer divine powers on those who drank it:

We have drunk Soma and become immortal;
We have attained the light, the Gods discovered.
Now what harm may foeman's malice do to harm us?
What, O immortal, mortal man's deception?

The toxic fungi Amanita muscaria, commonly known as the fly agaric, was used to prepare the soma.1 The feelings of euphoria or invincibility experienced by those who drank it were eventually attributed to a group of isoxazoles centuries later. Two of these - ibotenic acid (1) and muscimol (2) - were first isolated from the Japanese mushroom Amanita ibotengutake in the 1960s, but found in abundance in all Amanita mushrooms. 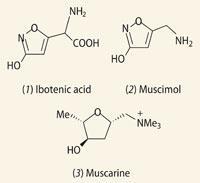 We now know that both of these compounds target the γ-aminobutyric acid (GABA) receptors in the brain. The disturbance or blocking of these receptors allows other excitory neurotransmitters, such as glutamate and acetylcholine (AC), to dominate neural activity, resulting in states of anxiety or excitement.1

Muscimol does not break down in the body, and so remains in the urine for days after it is ingested. Indeed, peasants would often pay their religious shaman for their urine in the hope that if they drunk this liquid they too would enjoy a similar experience to that described in the Rig veda.

However, the euphoria was not without its side effects. Ingestion of extracts of the fly agaric also induce other symptoms, including sweating, nausea, twitching and auditory or visual hallucinations. Some of these side effects no doubt added to the spiritual experience of the drink, others alluded to the toxic and potentially fatal attributes of another compound contained in the fly agaric, ie the alkaloid muscarine (3).

If ingested, muscarine (3) causes increased salivation, twitching and sweating, and in larger doses nausea and diarrhoea. Death is rare but may result from cardiac or respiratory problems in severe cases. Muscarine mimics the action of the neurotransmitter AC.2 Acetylcholine binds to AC receptors on muscle fibres, which causes the muscle to contract, and which goes some way to explain the twitching and nausea experienced when fly agaric is ingested. 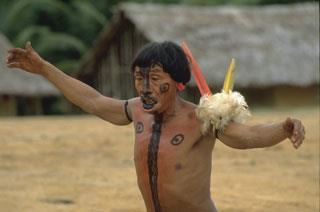 As an AC agonist (ie it binds in a similar way to receptors as acetylcholine, evoking the same response), muscarine also alters the activity of the GABA receptor. It was the observation of the similar activity of these two compounds on smooth muscles which motivated chemists in 1811 to attempt to isolate muscarine and determine its structure. However, the average yield of muscarine when extracted from a batch of fly agaric was extremely small, of the order of around 0.0002 per cent, and though other Amanita mushrooms, notably Amanita pantherina, contain higher concentrations of this alkaloid, the early attempts of structural elucidation proved inconclusive.3

It was not until 143 years later, in 1954, that chemists, using partition chromatography on cellulose, isolated muscarine chloride in its pure crystalline form.3 Using IR and UV spectrophotometry, they established its molecular formula as C9H20O2NCl. At that time, with analytical techniques in their infancy, the structure of muscarine chloride could only be confirmed by total synthesis of the compound.

The first stereospecific synthesis of (+)-muscarine chloride (Scheme 1) was devised by E. Hardegger and F. Lohse.3 Starting with l-glucosamine (4), oxidation with bromine water gave l-glucosaminic acid (5), followed by its conversion to l-chitaric acid (6) with nitrous acid. Subsequent conversion to its dimethylamide (7) was achieved by reaction with diazomethane and dimethylamine. The alcohol groups of this amide were then tosyl protected so that selective reduction of the tritosyl derivative (8) with LiAlH4 gave (+)-normuscarine (9). This compound was then quaternised and converted to the chloride via intermediate steps to give (+)-muscarine chloride (10), thus confirming the structure of the compound. 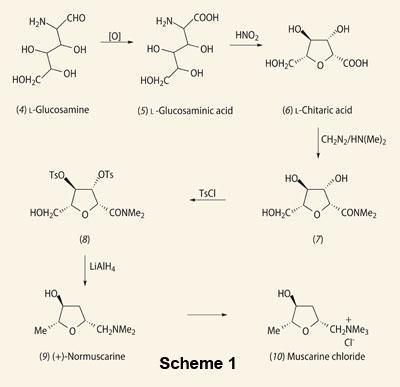 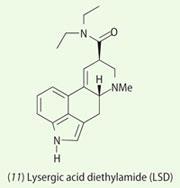 The ancient ritual drink soma has a modern parallel. In 1956 the French mycologist Robert Heim noticed that extracts of the fungi Psilocybe mexicana, were being used in a religious, ceremonial drink, like the soma, by the Indians in southern Mexico.4 He sent samples of this mushroom to Swiss chemist Albert Hofmann for analysis. Hofmann had recently become renowned for his discovery of lysergic acid diethylamide, LSD (11).

Hofmann set about cultivating large amounts of the mushroom in his laboratory so that he would have enough to isolate the active component responsible for the hallucinatory effects. Hofmann and some of his coworkers went as far as to eat the mushroom to test its effects and the following report by colleague Dr R. Gelpecke reveals the similarity of this new hallucinogen to soma:

It seemed to me that 100 years would not be sufficient to describe the fullness of experience of a single minute. At the beginning, optical impressions predominated: I saw with delight the boundless succession of rows of trees in the nearby forest. Then the tattered clouds in the sunny sky rapidly piled up with silent and breathtaking majesty to a superimposition of thousands of layers - heaven on heaven - and I waited then expecting that up there in the next moment something completely powerful, unheard of, not yet existing, would appear or happen - would I behold a God? But only the expectation remained the presentiment, this hovering, 'on the threshold of the ultimate feeling'. 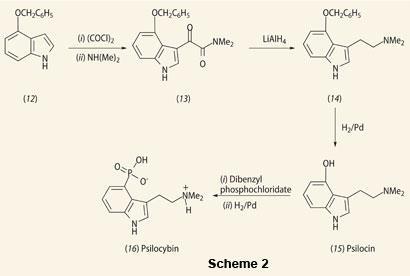 They treated the protected 4-hydroxyl-indole derivative (12) with oxalyl chloride and dimethylamine to attach a side chain to the pyrrole ring (13). They then reduced the side chain of this compound with LiAlH4 to give compound (14). The protecting benzyl moiety was removed by reduction with H2/Pd to form the active hallucinogenic compound psilocin (15). Phosphorylation of the 4-hydroxy group of psilocin with dibenzyl phosphochloridate, followed by reduction with H2/Pd gave psilocybin (16). Although both psilocybin and psilocin are present in Psilocybe mexicana, the former is hydrolysed in the body to give psilocin.

The psilocin and psilocybin discovered by Hofmann were among many hallucinogens tested as drugs in the 1950s and 1960s. Despite showing early promise in areas such as psychiatry and addiction treatment, their use in these areas was eventually discredited. However, pharmacologists are now claiming that psychedelic drugs such as LSD and psilocybin could be beneficial in the treatment of conditions such as anxiety, post-traumatic stress disorder and rare forms of multiple headaches known as cluster headaches. 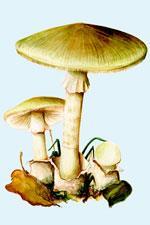 Long after soma had passed into history, fungi continued to be used by the privileged and powerful, but this time for their culinary properties.

Among the most delicious tasting mushrooms is the Amanita phalloides or 'death cap' mushroom, which contains the toxic peptide α-amanitin (17), first isolated in 1940 by Rudolf Hallermayer.6 Subsequent research showed that this compound was toxic, indeed a dose of less than 0.05 mg per kg of body weight is sufficient to cause death. This mushroom formed the basis of the last meal eaten by King Charles VI of Hungary, as part of an opulent and exquisite banquet.

The poisoning of the king followed a pattern now familiar as that of α-amanitin toxicity - after around eight hours a severe gut reaction is felt with vomiting, cramps and severe pain, which persist for at least 24 hours. After this time a pseudo recovery occurs with the painful symptoms receding and the patient typically feeling much better and on the road to recovery. Unfortunately, this stage marks the irreversible necrosis of the liver and death typically follows around three days after ingestion.4 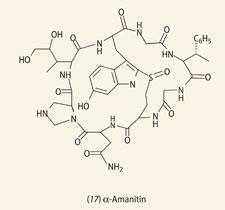 The death of King Charles VI by α-amanitin poisoning led to the Austrian war of succession, ensuring the notoriety of the death cap mushrooms in the historical record. At the time Voltaire noted in his diary that:

This dish of mushrooms changed the destiny of Europe.

The death cap mushroom continues to claim the lives of the unwary amateur mycologist, owing to its close resemblance to the many edible varieties of mushroom.

Albert Hofmann - and his 'bicycle day'

Albert Hofmann was born in Baden, Switzerland, in 1906. After graduating from the University of Zürich with a degree in chemistry in 1929, he went to work as a research chemist with Sandoz pharmaceuticals in Basel. His research centred on the alkaloids extracted from plants and animals. In 1930 he received a PhD for his structural work on chitin.

However, it was his research into the alkaloids extracted from a fungus that eventually led to his unintentional fame. In the years up to 1939, Hofmann systematically investigated lysergic acid derivatives, but many showed little medicinal activity and so he moved on to other more promising compounds.

Four years later on 16 April 1943, Hofmann returned to lysergic acid diethylamide (LSD) and accidentally absorbed a small dose of this compound through his skin, becoming the first person to experience its effects. Three days later, he intentionally ingested 250 g of LSD, leading to what has become known as his 'bicycle day' as he experienced a psychedelic bicycle ride on his way home from work.