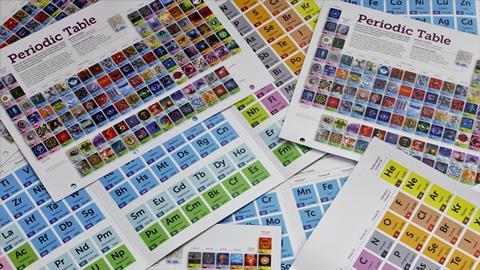 The evolution of the periodic table

2019 is International Year of the Periodic Table of Chemical Elements, but how did we get there?

The periodic table is known the world over, to scientists and non-scientists. While only scientists might notice if some elements were misplaced, the overall arrangement of little squares containing a number and element symbol is immediately recognisable. It didn’t always look like this though, so let’s explore some of the highlights of its development.

This article describes some of the work of the early scientists that led to the modern periodic table. It introduces students to the importance that knowing reasonably accurate atomic masses played in successfully ordering the elements, and shows that the early scientists were not always correct in their assumptions.

The article provides a historical background that fits nicely alongside the curriculum and will be of interest to anyone studying the chemistry of the modern periodic table. The activity will bring a piece of scientific history to life.

French chemist Antoine Lavoisier drew up the first list of so-called ‘simples’ – substances which at the time could not be broken down further. He included elements known as ‘earths’, such as magnesia and barytes, but left out soda and potash since he suspected they could be broken down. 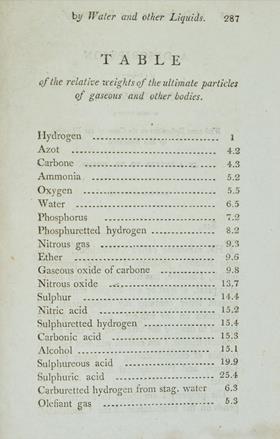 The first table of what we now call atomic masses appeared in print, produced by John Dalton.

Dalton did not know in what ratios the particles were combining. He usually assumed the ‘ultimate particles’, or ‘atoms’ as he later called them, combined in the simplest ratio, 1:1. He thought one particle of water was made up of one atom of hydrogen and one of oxygen. Since the gases seemed to combine in the ratio by mass of 1:5.5, he thought an oxygen atom must be 5.5 times the mass of a hydrogen atom.

Similarly, Dalton thought what we now know as sulfur dioxide was made up of one atom of sulfur with one atom of oxygen. The relative mass of the product (what he called ‘sulphureous acid’) had a mass of 5.5 (the oxygen atom) plus 14.4 (the sulfur atom). Sulfur could combine with more oxygen to form the oxide we now know as sulfur trioxide, but he thought that contained one sulfur atom and two oxygen atoms. He called sulfur trioxide sulfuric acid, since the importance of water in the acid’s formation was not yet understood. According to Dalton, sulfur trioxide had 5.5 more mass than the lower oxide due to the additional oxygen atom.

1807: Sodium, potassium and other metals 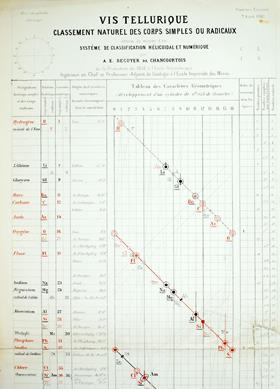 Source: The Master and Fellows of St Catharine’s College, Cambridge

French mineralogist Alexandre-Émile Béguyer de Chancourtois developed a system to arrange all the then-known elements according to their relative atomic masses. He marked the positions of the 60 known elements on a scale showing increasing atomic mass, but then wrapped the scale in a helical fashion around a cylinder of circumference 16 mass units. When plotted this way, elements with similar properties (ones we would now say are in the same group) were, to a good approximation, aligned in vertical columns. Lithium (7), sodium (23) and potassium (39) all differed by 16 units (almost) and were aligned on successive turns of the helix. Rubidium (87) being 48 units heavier than potassium was aligned with, but three turns below, potassium.

Unlike Mendeleev, Béguyer did not predict missing elements’ properties, but since he was plotting a graph, there was space for additional discoveries. Béguyer called his system ‘vis tellurique’ or, in English, the ‘telluric screw’ because the element tellurium was located in the centre of the chart, and, since he was primarily a mineralogist, because the name had a connection to the earth.

Create your own telluric screw

In this activity students replicate the work of Béguyer and create their own telluric screw. Completing the activity will both bring a piece of scientific history to life, and help to reinforce students’ understanding of the patterns seen within the modern periodic table.

Download the student worksheet (MS Word or pdf). The instructions are also available as a slide (MS Powerpoint or pdf)

Russian chemist Dmitri Mendeleev published his first periodic table. Nor was he alone; a number of independent workers came up with early version of the periodic system. It was thanks to the work of others like Béguyer that these early tables were possible. Mendeleev could not have created his table until a reasonably accurate set of atomic masses was known and there were enough elements to recognise patterns within their arrangement.

We now know elements in the periodic table are ordered by atomic numbers. Apart from a few instances (such as tellurium and iodine which have caused considerable confusion), this order is the same as the order of elements’ relative atomic masses.

International Year of the Periodic Table of Chemical Elements, proclaimed by the United Nations to raise awareness of its beauty and significance.

Students can use the game of Top Trumps to compare the appearance and properties of the different elements and make connections between the two. The support packs available for primary and secondary education provide additional activities that could be carried out using the Top Trumps pack.

Students can use the game of Top Trumps (rsc.li/2NUV9gF) to compare the appearance and properties of the different elements and make connections between the two. The support packs available for primary and secondary education provide additional activities that could be carried out using the Top Trumps pack.

An interactive periodic table containing a wealth of information that students can use to delve deeper into the patterns and trends. Also available as an app for iOS and Android.

An interactive periodic table containing a wealth of information that students can use to delve deeper into the patterns and trends (rsc.li/2yY1J0a). Also available as an app for iOS and Android.

Students can use this game to challenge their understanding of the arrangement of the elements in the periodic table.

Students can use this game to challenge their understanding of the arrangement of the elements in the periodic table (bit.ly/2PdscB3).

Take a look at our other articles and resources as we begin to celebrate the International Year of the Periodic Table of Chemical Elements.

Article by Peter Wothers a teaching fellow in the department of chemistry, University of Cambridge and a fellow and director of studies in chemistry at St Catharine’s College, Cambridge, UK. Teaching resource by Catherine Smith, a secondary school teacher at Hinckley Academy and John Cleveland Sixth Form Centre, an 11–18 academy in Leicestershire.