The Last Castle – can a water cannon fire a hook and chain?

The Last Castle (Robert Redford and James Gandolfini) is about unrest and rioting in a military prison. In one rather dramatic scene the prisoners capture a high-pressure water cannon and use it to blast a grappling hook and chain into the air to capture a low flying helicopter. A prisoner then climbs up the chain and takes over control! It looks fantastic but could it really work? 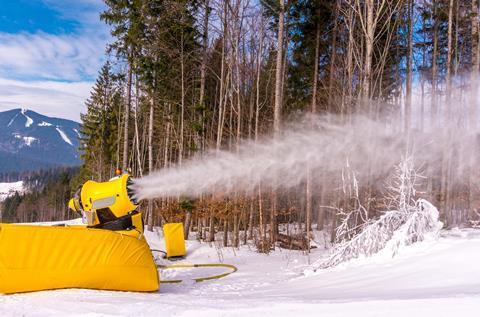 State-of-the-art water cannons can hold 9000 litres of water, pump 900 litres per minute at a pressure of about 1400 kPa and shoot a jet 75 m! The speed and weight of the water can easily knock people over and cause bruising, so you would think that the movie stunt would be very feasible.

If you ram a cork into the end of a garden hose and turn on the water, any trapped air in the tube will be compressed by the incoming water. The air will store up energy like a spring, until the friction of the cork is overcome, popping it out and sending it flying. This is how a spud gun or air gun works and partly how a toy water-rocket works. In the film clip however, the hook is just slotted into a tube at the end of the cannon and it’s very unlikely to be a good air-tight seal. In this case the air pressure won’t be able to build up and the grappling hook will be driven out only by the initial force of the water hitting it.

If the end of the firing tube narrows, the restriction will speed up the water and the resulting jet will go much further. The increased velocity may provide more momentum to the hook, however once the water is free from the hose it will spread out and the pressure will drop. As only a fraction of the water will now interact with the small end of the hook it will receive relatively little momentum from the water. So even though the water jet may go a long way, the hook will tend to drop down.

A few years ago we tried this out on a slightly smaller scale. We found that the water jet went a long way just as you see in the film clip, but unfortunately the grappling hook only went a metre or so. In the film a long metal chain was attached to the hook which would have been very heavy and have made the situation even worse. Overall we found that without the spring-like action of trapped air, the cannon just wouldn’t work for projecting anything other than water.