The Lion, the Wich and the Waller

Almost 30 years after its closure, the historic Lion Salt Works in Cheshire opens its doors to the public as an industrial museum and heritage site. Volunteer Mike Tingle relates some of its history

The suffix -wich, in Northwich, Middlewich and Nantwich in mid-Cheshire (and Droitwich, Worcestershire) denotes a place where salt was produced. The map of the area is scattered with blue, denoting meres and flashes formed by land subsiding, sometimes quite suddenly. The cause? Underground streams dissolving the underlying rock salt, which had already been hollowed out by salt mining or brine pumping.

Marston Flash, near Northwick, UK, was formed after Adelaide Salt Mine collapsed in 1928; water breached the cavern, dissolving the narrow rock salt roof-pillars. In other cases, salt producers unwittingly undermined their businesses by pumping up natural brine for evaporation. As fresh groundwater replaced the brine, more salt dissolved. The resulting cavities grew until they could no longer support the land above. 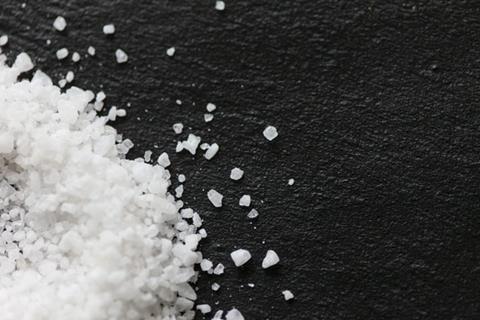 Near Marston Flash stands the Lion Salt Works (LSW). It was opened in 1894 by Henry Ingram Thompson and named after the Red Lion Inn, on whose land it stood. Henry’s father and grandfather had operated the Alliance Salt Works on adjacent land since 1856. LSW continued production until 1986, becoming the last open-pan salt producer in the UK.

Recognising its historic importance, Vale Royal Borough Council purchased the site, intending to restore it as an industrial museum. The Lion Salt Works Trust, set up in 1993, succeeded in securing grants to fund the £8 million project. This historic site, designated a Scheduled Monument, is now reborn as a heritage attraction and educational resource.

Archaeological evidence reveals that salt has been produced in mid-Cheshire (and Worcestershire) since the Iron Age. Natural brine resulting from groundwater flowing over underground salt beds (the remains of Triassic seas) was evaporated in pottery vessels over fires.

The Romans introduced the open-pan technique. Since salt is essential to life, Roman soldiers were paid partly in salt – the origin of the word ‘salary’. They evaporated brine in wide, shallow pans, made of lead to resist salt corrosion. The large surface area made evaporation much quicker than with pots, and also made removing the crystallised salt easier. A few Roman lead pans have been found in Cheshire, as have about twenty Medieval examples.

Originally for culinary and preservative uses, Cheshire salt became increasingly important during the 19th  century for the Merseyside alkali industry around Runcorn and Widnes. The open-pan process operated on an industrial scale to supply the escalating demand. Pans were much larger and were made, not from lead, but cast iron, which was cheaper, stronger, lighter and not liable to be melted by the furnaces beneath, even though it was highly susceptible to salt corrosion. Original pans can still be seen at Lion Salt Works.

However, careful control of the open-pan process enabled production of a range of different grades, unachievable by vacuum evaporation prior to developments in the late 1940s.  Lion Salt Works remained viable by producing a grade known as ‘Lagos salt’, favoured by West Africa. Nigeria’s Biafran War (1967–70) and subsequent political instability, combined with competition from cheaper Brazilian solar salt, led to the decline of this market and the consequent closure of LSW in 1986.

To produce one ton of salt required around 1000 gallons of brine, 0.5 tons of coal, and a lot of labour. Pans were operated on a weekly cycle, producing 24 hours a day for six days, then descaled on the seventh. Scale, which contained calcium, magnesium and potassium salts, was sold as animal salt-licks.

Different grades of salt were produced by workers with different expertise. Highly skilled ‘lumpmen’ were responsible for top-quality fine grades. Coarser common salt was made by workers known as ‘wallers’. 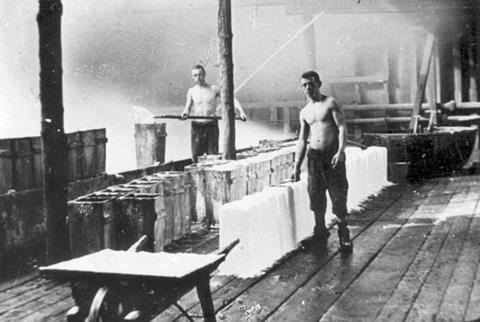 Producing different grades of open-pan salt required control of the evaporation rate, since rapid crystallisation yields small crystals, whereas larger crystals need time to grow. Early in the week, a very hot furnace evaporated the brine quickly, producing fine-grained salt. Part of the lumpmen’s responsibility was to keep an eye on the fire, to produce salt as quickly as possible.

Tiny crystals initially formed on the surface, then sank as they grew larger and heavier. After reaching the required size, they were pulled to the pan edges by lumpmen using long-handled flat rakes. Perforated skimmers were then used to scoop the salt into containers standing on an overhanging shelf, where excess brine drained back into the pan. Originally, these were conical wicker baskets, later replaced by small conical barrels, then by rectangular elm tubs, and ultimately by fibreglass (glass-reinforced plastic). Elm was used, since it is unaffected by being constantly wet; the same reason it was traditionally used for mill waterwheels.

The lumpman lifted drained tubs onto the floor and tamped them down using a ‘mundling stick’ (a cricket-bat-shaped heavy wooden tool) to compact the salt into solid rectangular lumps. Tubs of various sizes gave lumps ranging from 31 lb (14 kg) to 19 lb (8.5 kg), depending on the salt’s intended use. To harvest one ton of salt, therefore, a lumpman had to fill between 72 and 120 tubs. After further draining, he turned the lumps out of the tubs and carried them by barrow to the stove house. Here, waste heat from the pan furnace ran through brick channels, gradually drying out the lumps over the course of a fortnight.

Once dry, a ‘lofter’ lifted them through trapdoors into the warehouse above. Warmth from the stove house below kept the salt dry. Some grades of lump salt, such as Lagos, were crushed and sold in sacks. These lumps could be lofted using a spiked ‘prong’. Others were sold whole, so had to be lofted by hand to avoid damage.

Towards the end of the week, the fires were allowed to cool. The slower evaporation produced coarser grades – the responsibility of wallers. Alternatively, fine and coarse grades were made in separate pans. Sometimes a pan was divided by a metal plate – fine salt was produced in the front end above the furnace, and coarse salt in the cooler rear section.

Like lumpmen, wallers used rakes and skimmers to collect the salt. However, instead of packing it into tubs, they tipped it onto the ‘hurdles’ – a floor of wooden planks with narrow gaps between them, to allow the salt to drain before being barrowed away for storage and bagging.

The names ‘lumpman’ and ‘lofter’ are self-explanatory, but ‘waller’ is not. One possible, but unconfirmed, explanation is that tipping onto the hurdles built up a wall of salt alongside the pan. 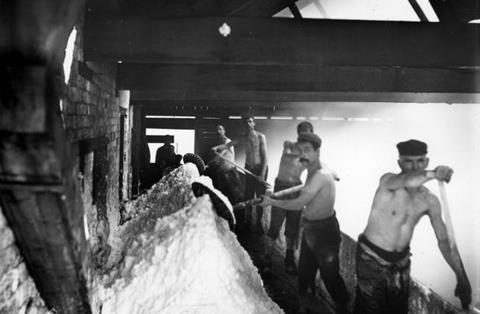 Producing different grades of fine salt involved more than just controlling the evaporation rate, and judging when to remove the crystals. Like other artisans, the lumpman learned the tricks of his trade (or salt-wich-craft). He would add small amounts of extra ingredients to the pan. What he used depended on the grade required. Soft soap and glue were common additions, but oral histories tell of butter, tobacco, shellac and even a cow’s heel. Soap reduced surface tension, causing fine crystals to sink sooner. Glue increased surface tension and crystal size. Other additives may have acted similarly, or as crystal habit modifiers, just as adding a few ppm of sodium hexacyanoferrate(II) produces branched crystals of dendritic salt today.

In the days of uncontrolled ‘wild’ (ie natural) brine pumping, subsidence was common but random, often at some distance from the salt works themselves, making it impossible to pin the blame on particular companies. Many buildings in Northwich town were built on timber platforms that could be jacked up when the ground subsided. Lion Salt Works’ brine well was on-site, yet, unlike Adelaide Mine across the canal, it suffered only minor subsidence.

Modern brine pumping, for both domestic salt and the chemical industry, is carefully controlled. Water is pumped into the salt strata and brine pumped back up. The resulting cavity may grow large enough to hold St Paul’s Cathedral. Its size is monitored with sonar, and when it reaches its safety limit, extraction is stopped. The cavity is left full of saturated brine to prevent further dissolution. Brine wells are arranged in a grid, leaving sufficient solid rock salt between them to support the land above. Some disused cavities are now used to store natural gas under pressure.

On the positive side, the saline landscape (pdf) around flashes and natural brine springs supports flora and fauna normally found only in coastal areas. The shallow flashes attract both breeding and over-wintering wildfowl and waders, such as teal, wigeon, lapwing, snipe and curlew. The water supports salt-tolerant pond weeds, such as spiked water milfoil, while sea aster grows around the edges.

Northwich’s ammonia-soda plants produced vast quantities of calcium-rich waste, which was pumped into huge settling lagoons. The area is littered with their dried-out remains, which now provide important calcareous habitats. Fragrant orchids thrive here, as does birdsfoot trefoil, on which feed larvae of the rare Dingy Skipper butterfly. 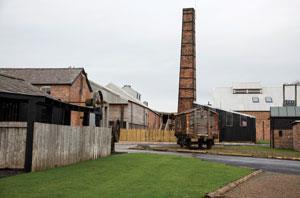 After its closure in 1986, and thus without maintenance, LSW became dangerously dilapidated. Fortunately, it was rescued and stabilised by Vale Royal Borough Council (and now Cheshire West and Chester Council) and the Lion Salt Works Trust. Following many years of preservation, restoration and redevelopment, the site opened to the public in Spring 2015.

Although the buildings were mostly brick and timber to avoid salt corrosion, time and weather had taken their toll, necessitating a considerable amount of repair or replacement, while retaining their Victorian appearance. Where cast iron columns had been used, for example in the stove houses, these have been supplemented with new columns and beams to make the warehouses above safe.

Many of the old features remain, including the brine pump and donkey engine, brine storage tank, three salt pans, the lump salt crusher and an early-1900s wooden railway wagon. Restored buildings, including several pan houses, stove houses and the Red Lion Inn, now house displays telling the story of LSW and its surroundings.

Pan House 3 hosts the ‘Boiling Pan Experience’ centred on its original huge pan, albeit corroded and buckled, with its furnace beneath. Even if the pan were physically sound, it would not be feasible to fire it up; the temperature and steam-laden atmosphere would be intolerable for visitors. Instead, mist generators, state-of-the-art video projection and animatronics conjure up an evocative impression of the evaporation process. 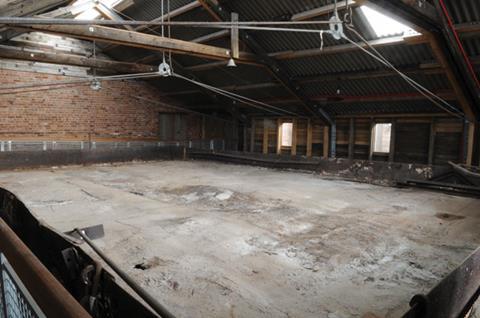 Those interested in the restoration process can read reports from 1995 to 2008 in the LSW Trust’s magazine, The Mundling Stick, and more recent accounts in the LSW blog archive.