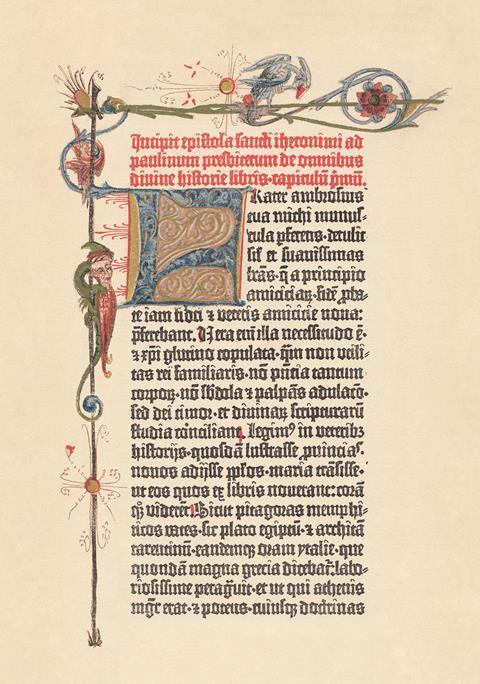 A page from the Gutenberg Bible

Today, if we want to pass on any information, technology abounds – we can print it, photocopy it, send it by post, or via the internet, to any number of people anywhere in the world. It’s easy. But this hasn’t always been the case and it is fascinating to stop and think how stories such as the Gospels in the Bible, written nearly 2000 years ago, ever came to be so widely read given the lack of any technological prowess. But they were. In medieval times, monks in monasteries around the world would borrow manuscripts from other libraries and meticulously copy them word-for-word so that they had their own copy before returning it or passing on the original.

But palaeography tells us nothing about the materials and technology the monks used to produce them. Some information can be gained by simply looking at the manuscripts – they were written on parchment from the skins of goats, sheep or calves. Investigative work in the 1950s on the Lindisfarne Gospels, using optical microscopy to compare samples made up from the few available ‘recipe’ books, suggested the presence of some 13 pigments but was by no means conclusive. A more detailed scientific analysis of the materials on the manuscripts was needed.

In the summer of 2013, the Lindisfarne Gospels and a selection of other medieval books, dating from the early 700s to 1105, were put on display in the Palace Green Library at Durham University, UK. As chance would have it, one of the sponsors of the exhibition was an ex-Durham chemistry graduate who was keen to talk to someone in the chemistry department about using spectroscopy to shed some light on the pigments that had been used in the manuscripts. So spectroscopist Andy Beeby was called to discuss the possibilities.

Around 20 years ago, Robin Clark, professor of chemistry at University College London, had shown that Raman spectroscopy could be used to investigate the pigments in medieval manuscripts, including the Lindisfarne Gospels. However, the books in the Durham collection had never been studied from a scientific perspective. ‘Knowing of Robin’s work in this area meant that we could certainly look at these books with Raman spectroscopy. We had the instrumentation,’ explains Andy. ‘So I said “Bring your books to the department and we will look at them”.’

But these books are priceless and cannot be simply moved anywhere. Andy quickly realised that any analytical instrument used to study them would need to be moved to the books. Furthermore, there are strict rules when it comes to investigating medieval manuscripts: you cannot take a sample nor leave a mark – any technique used would have to be non-invasive, non-damaging and non-sampling.

Last May, with a Raman spectrometer moved to the Palace Green Library, Andy and two research chemists from his group, Kate Nicholson and Andrew Duckworth, started analysing the pigments in a range of manuscripts from the Durham collection.

So what is Raman spectroscopy and what makes it such a good technique for studying medieval manuscripts?

In 1921, Indian scientist Chandrasekhara Raman was on a sea voyage to Europe when he noticed the beautiful blue opalescence of the Mediterranean Sea. He reasoned that the light scattered by the water molecules might be responsible for the colour, and the study of light scattering became his and his student Kariamanickam Krishnan’s main research focus from then on, and for which they received the Nobel prize for physics in 1930. The phenomenon is called Raman scattering.

Andy explains the phenomenon: ‘In Raman spectroscopy, we shine a pure, single colour of light [from a laser] on the material in question, in our case a page, and the light scatters – it bounces off the molecules in the sample. Most of the light bounces off with exactly the same energy and hence the same colour. But a tiny fraction, about one in a million of the photons bouncing off the molecules comes off at a slightly different frequency: they have lost some of their energy to the molecules and therefore have a slightly different colour. By looking at the difference between the light that goes in and the light that comes back,’ he says, ‘you can work out the vibrational spectra of the molecules and therefore identify the substance.’

Raman spectroscopy can be used to reveal the chemical composition of a substance beneath the surface of a solid. Find out more with this article on chemistry with lasers.

Raman spectroscopy can be used to reveal the chemical composition of a substance beneath the surface of a solid. Find out more with this article from Education in Chemistry (http://rsc.li/1pM7Mu0).

Andy likens Raman spectroscopy to going into a sweet shop that has no prices on the sweets; if you buy the same sweet each time (the substance) and pay with a £1 (the single wavelength of light) each time, you can work out the cost (the energy) of the sweet by the change you are given. ‘It tells me, in price terms, what energy I have given to the molecule, and by knowing this I can obtain its molecular fingerprint.’

‘Every molecule has a unique Raman fingerprint,’ says Tony Parker at the Science and Technology Facilities Council–Rutherford Appleton Laboratory near Oxford, UK. ‘Inorganic pigments and symmetrical molecules that are easily polarisable [by light] are particularly strong Raman scatterers. Add to this that the technique can be used remotely away from the sample and it is clear why the technique is ideal for studying these medieval manuscripts.’ 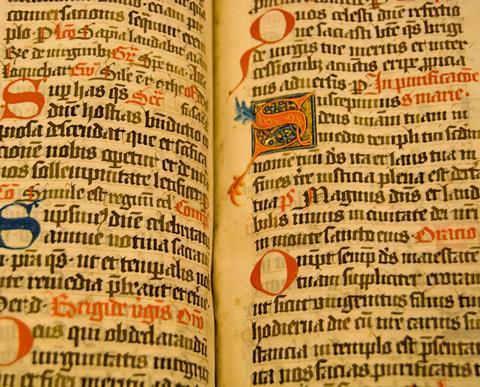 Raman spectroscopy could find traces of pigments such as red lead, vermilion, lazurite, orpiment and verdigris in a page like this

Using Raman spectroscopy, Robin Clark was able to identify the inorganic pigments used in the Lindisfarne Gospels. Robin confirmed the use of orpiment (As2S3) for yellow; minium, red lead (Pb3O4) for the orange and reds; and vergaut, a mixture of indigo (blue) and orpiment, as one of two green pigments, the other being the copper-based verdigris. White areas were either plain parchment, chalk (CaCO3) or white lead (2PbCO3•Pb(OH)2) – the latter two were found in the pink and beige areas. The gold used on the manuscripts did not give the characteristic Raman spectra for the common imitators of gold, such as orpiment, pararealgar (As4S4), Naples yellow (Pb2Sb2O7), or mosaic gold (SnS2), so he concluded that the monks probably used metallic gold.

Significantly, Robin was also able to debunk a myth arising from earlier investigations, that the blue pigment was lazurite (Na8[Al6Si6O24]Sn) from the mineral lapis lazuli. He showed, unequivocally, that the blue is indigo (C16H10N2O2), an extract from the woad plant, Isatis tinctoria.

In the manuscripts they studied, the Durham chemists found extensive use of orpiment, a pigment that was not found in Britain. Andy speculates that it came from Italy because it is found mostly near volcanic outlets and the monks were known to go on pilgrimages to Rome and come back with pigments and books.

The chemists also found red lead in the orange and red hues on the manuscripts. Again, this is not surprising, says Andy. ‘Weardale, inland from Durham, was mined extensively for lead during Roman times. But here the lead is present as lead sulfide – galena – so the monks would have had to process this to make the pigment.’ In the process, other oxides would have been formed, and indeed the chemists have also identified mixtures of red lead and massicot (PbO) in the orange and reds on the manuscripts. The deep and vibrant green pigment used in the Durham Gospels was confirmed to be the copper-based verdigris; vergaut was not present in these books, which pre-dated the Lindisfarne Gospels.

That the monks understood some chemistry is again reflected in the fact that the pigments they used, such as red lead, didn’t fade with time. This pigment in other ancient manuscripts is well known for going grey or black, particularly when used close to orpiment, owing to the formation of black lead sulfide. The monks must have been aware of this, so they used techniques that allowed the two to be used together. ‘We can only speculate on how they did this, but modern artists suggest coating the pigment particles with barriers of proteinaceous gum to stop the reaction,’ explains Andy.

Studies on a later book, which describes the history of the founding of Durham written by a monk called Symeon, showed evidence of a new range of pigments, including deep red vermilion (HgS) and a deep blue, which was confirmed to be lazurite. Symeon probably came to Durham with the Normans when they invaded, and brought with him his own ‘toolbox’ of pigments, which included lapis lazuli and vermilion. The only known source of lapis lazuli at that time was the Badakhshan mines in Afghanistan, so its use implies the existence of a remarkable trade route from Afghanistan, through Europe, to Northumbria.

‘The project has recently snowballed,’ says Andy, ‘and we have had the privilege to look at many other books, including ones produced on the continent in the early 1400s. We are seeing changes in the use of pigments with time and location, and this is allowing us to piece together the story of the “technology of illumination” in the UK from the 600s to this later date. This will help historians to better understand the documents and their historical connections.’