The periodic tables of Mendeleev

In this second celebratory article on Mendeleev, we witness how he corrected the atomic weights of In, Ce and U, and thus constructed the remarkable Periodic Table of 1871. 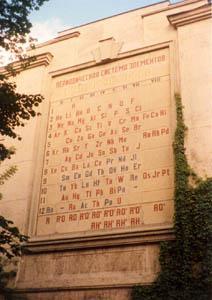 What is important is that the Periodic Tables of 1869 and of 1871 are totally different in appearance.1 Figure 1  shows his Table of 1869. The elements are ordered on atomic weight with 'Groups' running horizontally, eg  Li, Na, K, Rb and Cs. H stands alone. The elements In, Ce and Ur are positioned according to their wrong atomic weights; and there are gaps for the yet-to-be discovered elements with atomic weights of 45, 68 and 70. Here Mendeleev is certain. But he has problems with the heavy metals. Hg and Au are wrongly placed, as are Tl and Pb. It is the robust +1 and +2 oxidation states of these latter two elements that prompted him to put them below Cs and Ba respectively.

A change in layout

By 1871, the layout had changed to vertical Groups, and the elements In, Ce, and U are in their corrected positions.2 (see Fig 2). There are gaps for elements of atomic weights 44, 68 and 72, and 100 (to become technetium in 1940). Now the vertical Groups contain two families linked by a common oxidation state, eg Group II - Be, Mg, Zn, Cd and Hg, and Ca, Sr and Ba. This is different from the arrangement of 1869 where the family Be to Cd is distant from Ca to Ba. We also notice that the elements Cu, Ag and Au are duplicated in Group I and Group VIII, bracketed in Group I. Hg is now correctly placed below Cd, and Au is below Ag. The atomic weights of Os and Ir are marked with '?'. Chemically they are correctly placed below Ru and Rh - it is their atomic weights that are in doubt. Similarly, Te (128?) bothers Mendeleev. He insists that 128 is too large, and that the atomic weight should be smaller and should be redetermined. In this case he was wrong. Hydrogen, H, is still alone, though at the top of Group I. This is the basic structure of the short form Periodic Table in common use until the 1940s when the medium/long form became popular.

By 1886 the three missing elements Sc, Ga and Ge had been found, and the inert gases were isolated in the 1890s. The Periodic System now showed its power and flexibility. It allowed the incorporation of these new mysterious gaseous elements as Group 0, after Group VII, the halogens, and before Group I. This is shown in Fig 3, a Table from the 1905 edition of Mendeleev's textbook, Osnovy ximii.3

The Group of inert gases is nicely separated to the left. There is a well-defined gap for an element of atomic weight 99, and a series of gaps for elements that will eventually become the lanthanides. (Mendeleev in a footnote to this Table comments on the difficulty that he has with placing those few which have been unequivocally identified.) The radioactive elements Rd, Th and U are correctly placed, with gaps for missing elements in horizontal row 12. Cu, Ag, and Au are still duplicated. There is a feeling of complete certainty all the way through to row 8, and again for the series Au to Bi in row 11. However, Mendeleev also offers a 'Groups horizontal' Table, shown as Fig 4. 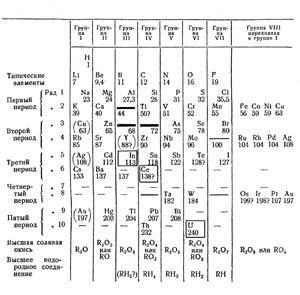 We see here the Group 0 gases duplicated at top and bottom. The atomic weights in each vertical column increase down, and if the Table is rotated 90 degrees, it looks very much like a typical post-1950 Table, except that the atomic weights now increase from right to left, eg the series Ar, K, Ca to Se, Br and Kr. This arrangement with a continuous series in a column makes it obvious that the series Os to Bi is related to Ru to Sb and to Fe to As. Fe, Co, Ni head Group VIII (misprinted VII). He to Ne and Ne to Ar are labelled 'Typical Elements'. Here are two arrangements that seem to be totally different, both from the discoverer of the Periodic Law, but both follow the System.4

A closer look at the Table in Fig 4 shows that Ar = 38 has a superscript, as also does Ni = 59 and J (iodine) = 127. In the accompanying text Mendeleev says that these figures must be the correct atomic weights to fit into the System because these elements must obey the Periodic Law. He has a major philosophical problem and is in a scientific dilemma. In fact, the atomic weights (which he will not accept) had been accurately determined and showed that the orders Ar/K, Co/Ni, Te/J should be reversed (!) contrary to any chemical criteria. Only with the discovery of atomic number, the neutron and isotopes (many years after the death of Mendeleev) was this difficulty overcome.

The numbered rows in Fig 3 (and on the memorial Table in St Petersburg) are exactly that - rows, the Russian term ryadi. The numbering of Periods in our current Periodic Table is based upon the principal quantum number, n, and is accepted internationally. This did not exist when Mendeleev chose his labels. His rows (ryadi) 6 and 7 (in Fig 3  and the St Petersburg Table) correspond to today's Period 5, except for Kr included and Xe omitted. In 1871 (Fig 2) he used the term Typical Elements for the line Li to F, and Second Period (rows 3 and 4) for (Cu) to Br, Rb to Ag, with our Groups 7 and 1 in the middle of the series. This use of Period was gone from the 1905 and 1934 Tables. The final Table of Mendeleev is that on the wall of the Bureau of Weights and Measures in St Petersburg, erected in 1934. It is little different from that of 1905 (Fig 3), but the new radioactive elements Po, Rn, Ac, Pa have been added, as have the lanthanides (they are still posing problems of where to put them).5H stands alone, and there is still much debate about where to place this element. The small detail is interesting: note how capital letter J is used in place of capital I for iodine, and Jn is indium and Jr is iridium. J is for illinium, later shown to be spurious. The capital J is being used rather that capital I. This is done because in the sans-serif font used for the letters in this Table, capital I and lower case l are almost indistinguishable. In German, the symbol for iodine is J; the name is jod. Also, the ideal formulae for oxides and hydrides have superscript numbers, eg R2O5 and RH3 for Group V. These were more correctly subscripts in the Table of 1905 (and also in that of 1871). Note too that there are neither atomic weights nor atomic numbers.

Many Tables but one System

One must not be blinkered and believe that there is only one perfect Periodic Table. This is not true. There are many ways of arranging the elements to give Tables of different appearance6-8 - but all arrangements must obey the System of chemically similar elements being adjacent, either vertically or horizontally. Mendeleev shows this quite clearly, see Fig 3  and Fig 4. He was quite satisfied with both of these two alternative arrangements, otherwise he would not have published them in his book. Michael Laing is emeritus professor of inorganic chemistry, University of Natal, RSA. He can be contacted at 61 Baines Road, Durban 4001, Republic of South Africa (e-mail: laingm@eastcoast.co.za).