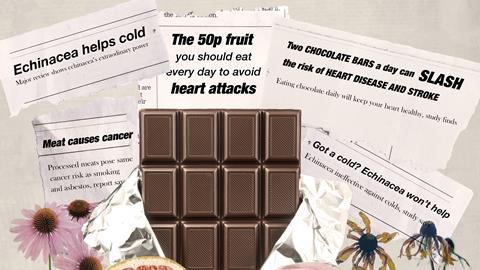 The science behind the headlines

Science headlines in the national media can mislead, so how do we find the real story?

Bacon causes cancer. Two bars of chocolate can reduce our risk of having a heart attack or stroke. Such headlines are often in the national news, but are they true or false? Fake news or accurate health advice? How can we find out?

Much scientific research finds its way into mainstream media; indeed, there is often much to report. In 2009 an estimated 2.5 million new scientific papers were being published every year. Not all of these are reported in newspapers, TV bulletins or on major news websites, but when they are, it can be difficult to decode the headline to understand what the research really said.

In order to make medical breakthroughs, scientific research and trials are essential. They provide trustworthy, evidence-based information. This is described as the practice of evidence-based medicine (EBM). It underpins modern medical practice and is made up of three components: patient values, best research evidence and clinical expertise.

Best research evidence is vital and many organisations, such the Cochrane Library, provide it. The Cochrane Library offers six databases in medicine and healthcare specialties, which the public can search. These kinds of sources are useful for working out what science is behind the headlines.

Equally important are the clinicians who advise us, with their wealth of clinical expertise and knowledge, and our values and expectations as patients. All three components inform EBM, and the eventual success or otherwise of medical research.

The critical analysis of scientific evidence is a key skill both for scientists and the general public. In a global technological world with 24-hour news reporting we are bombarded with headlines about science and accompanying data.

This article highlights some key messages about the science headlines we see in the media. It can be used as a stimulus for discussion of science in the media, how data can be misrepresented and the role of evidence in decision making. The article is suitable for students to read and a quick web search will turn up many headlines for them to research. The linked resource helps younger students (11–14) develop their critical thinking by analysing claims presented to them in advertising.

When you’re reading the news, look behind the headlines. Think about whether the research has been reported accurately. Find out what kind of studies were conducted and examine the reported evidence. And before you start eating more chocolate to combat heart disease and less bacon to avoid cancer, talk to a health professional.

Here are two examples of how research was reported in the national news:

In 2015, The Guardian reported on a press release from the World Health Organisation (WHO) concerning the link between processed meats and colorectal cancer. The headline was: Processed meats pose same cancer risk as smoking and asbestos, reports say. The Guardian wasn’t alone in implying a comparison between the risks of eating processed meat and of smoking.

But this isn’t the case. The WHO statement didn’t mention comparative risks. It announced processed meats were to be included in their list of Class 1 carcinogens (substances known to cause cancer). Other Class 1 carcinogens include tobacco and asbestos.

In fact, eating processed meats (50g per day, about two rashers of bacon) increases our relative risk of developing colorectal cancer by about 20%. What does that mean for the average person? Before this report, the baseline risk of having colorectal cancer at some point in our lifetime was put at 5%; the report increased it to 6%. This is an increase in absolute risk of 1%, which is not as alarming as the headlines made out. Smoking increases our relative risk of having lung cancer by around 300%.

Why might bacon cause bowel cancer? No one knows for certain but it may be to do with nitrite preservatives. These can generate N-nitroso compounds in the gut, which damage the cells lining the bowel.

Finding the truth behind the headlines

Critical analysis of evidence, especially in social contexts, is a key skill for young people but it is easily overlooked in the rush to get through exam specifications. A good place to start analysing evidence and data is the advertising that surrounds us in our daily lives. This is an especially engaging context for younger students. Claims are made in advertising headlines that may be misrepresentations or even completely untrue. Mistakes in the use of numbers, for example, in price reductions and multibuy savings are also common. Use this resource to get your students used to spotting these kinds of errors and then encourage them to hunt for their own as they go about their daily lives.

Reporting on a University of Aberdeen study, in June 2015 The Mirror wrote: Two chocolate bars a day can slash the risk of heart disease and stroke. It seems too good to be true and, of course, it is.

The research was an observational study from the 1990s. Researchers followed a cohort of middle-aged and older people in Norfolk over 20 years. They studied data on their diet, lifestyle and health. On the face of it, it appeared that those eating more chocolate were less likely to have a heart attack or stroke. But there are several reasons why this wasn’t the whole story.

Firstly, those eating most chocolate tended to be the healthier, leaner, more active participants, while those at higher risk (and therefore having more heart attacks and strokes) tended to eat less. The data relied on self-reported dietary records, which are not always reliable. As an observational study, it could suggest a possible correlation between chocolate consumption and cardiovascular health but it did not establish a causal link. What is known is that chocolate is stuffed full of saturated fats and sugar, known ingredients for cardiovascular disaster.

However, there might be a kernel of truth hidden here. Chocolate contains flavonoids derived from cocoa. These compounds are antioxidants and may be beneficial to our hearts and blood vessels.

Lynda Maria WareLynda is a senior fellow in general practice at Cochrane UK, and also visits schools to teach students about critical thinking and healthcare