To boldly go where no analytical instrument has gone before 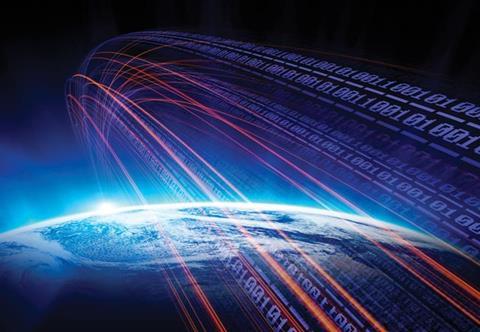 On 12 November 2014, the Philae lander became the first spacecraft to touchdown on a comet. And although it unexpectedly bounced, landing on its side in a shaded spot – preventing battery recharge by the sun – the analytical instruments onboard successfully collected 80% of the planned initial data before Philae went into hibernation. 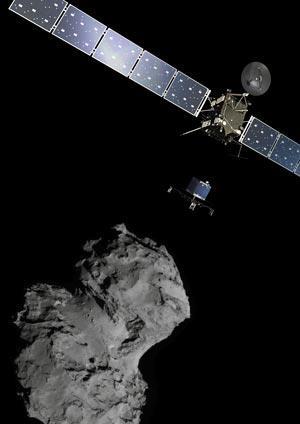 Its mothership Rosetta is still circling the comet, known as 67P/Churyumov–Gerasimenko (or 67P/C-G). It’s still collecting analytical data and will continue to do so until the end of September, when it too will land on the comet’s surface. ‘We are hoping that as its gets close to the comet we will get some good imaging of the Philae lander and its landing site,’ explains Ian Wright, a professor of planetary sciences at the Open University in Milton Keynes, UK. ‘This will give us some extra information to help us interpret our results.’

Ian is head of the team responsible for the gas chromatography mass spectrometry (GC-MS) instrument onboard Philae, called Ptolemy. Packed into a space the size of a shoebox, this instrument contains ovens, three gas chromatography columns (capable of separating components within different sample types), a mass spectrometer (that measures the mass of the separated components) and helium cylinders. Apart from its tiny size, the most obvious difference compared to a GC-MS instrument here on Earth is the lack of a vacuum pump. ‘We don't need a pump because we've got a really brilliant vacuum in space,’ explains Ian.

There is also a drill onboard Philae, which was meant to drill into the surface and deliver samples to Ptolemy and some of the other instruments onboard. But because of the landing position, it couldn’t reach the surface. ‘We got lucky with the first impact, as the legs on Philae gouged out holes on the surface about 20–30 cm deep and threw up a load of dust which went into the instrument. We got a sample into Ptolemy in a way that we didn't anticipate we were going to, but that's the nature of exploration.’

Ian’s team are still sorting through the data Ptolemy gathered from that dust cloud, and also the information it collected during Philae’s descent onto the comet. Ptolemy was charged with collecting information on the masses of the small organic molecules present on the comet. ‘We are looking for absolutely any molecule with a mass between 10 and 140 and also at the ratios between their isotopes,’ Ian explains. Water, carbon dioxide, carbon monoxide, acetone and formaldehyde are just some of the molecules his team are hunting in partnership with other instruments both onboard Philae and Rosetta.

The isotopic ratio of water is of interest, for example, because one theory as to how water came to be on Earth is that it was brought by comets that struck the planet’s surface in the early days of the solar system. However, results already released from the Rosina instrument (a mass spectrometer onboard Rosetta) show the deuterium-to-hydrogen ratio of the water it has detected on 67P/C-G is significantly different to that on Earth. This undermines the theory that comets brought the oceans to our planet. 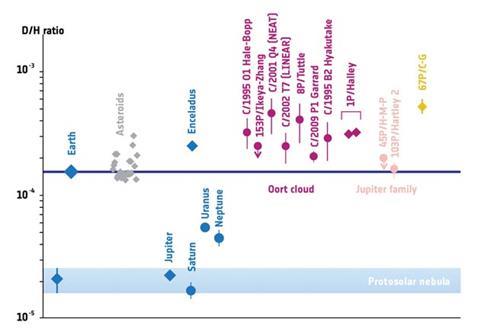 Formaldehyde is also interesting as it is widely assumed to be a building block to more complicated organic molecules, which in turn may have evolved to form life as we know it on our planet.

Helping to answer questions such as this about how our planet, and the life upon it, came into existence is one of the major aims of the Rosetta/Philae mission. ‘Comets are the debris leftover from the formation of the solar system,’ Ian explains. ‘They're the bits and pieces, along with asteroids and so on, that never coagulated into a planetary body. What you can get by studying these fragments is a complete insight into what it was the solar system was made of, and in particular, our own planet.’

It is near impossible to look at Earth as it is now and figure out what it started out as. The processes of heating, geology, atmospheric effects, and ultimately the biology, have changed the chemistry beyond recognition. ‘The chemistry's been changed from what it was originally, so you've no idea just by studying the Earth what it would have looked like at time zero. The way to tackle that is to study the fragments that have been in the deep freeze for 4.5 billion years,’ Ian says. ‘You can study that stuff in a number of ways. Asteroid fragments arrive on those meteorites, so that's one way of doing it, and then going to these bodies is another. Rosetta was the first ever attempt to not just merely fly past a comet, but to stay with it in orbit for a couple of years and also land on the surface and make some measurements.’

The mission has been a huge success, explains Ian. Although Philae was active for a far shorter time than hoped, ‘in many ways, it's remarkable that it achieved anything. There are so many unknowns with space missions’, he says. Rosetta and Philae launched in 2004, and then spent 10 years hurtling through space to reach the comet. ‘To have an instrument in space for 10 years, and then for it to switch on and do what it's supposed to do in the way you expected it to is an achievement in its own right.’ In fact all 21 of the scientific instruments onboard Rosetta and Philae woke up as planned. ‘With Beagle 2, which went to Mars, we ultimately didn't get any science return. That puts this mission into some kind of context,’ Ian says. 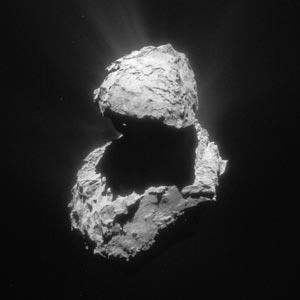 One of the biggest surprises of the mission so far was the comet’s rubber duck shape. ‘When we started getting close to the comet, the shape didn't look anything like we'd expected. We'd been practicing for landing on something the shape of a potato, and of course we had to just rip those plans up and start again.’

For chemists, of course, answering the question of what it’s made of is the most exciting part. ‘We want to know how the chemical elements are distributed. Are they in ices? Are they in silicate materials? The gases coming off the comet, how do they relate to the solids on the comet itself? That’s the kind of analysis we're all doing, those of us who are involved with chemical analysis.’

There may be another long wait, however, before we get all these answers, as data analysis is expected to take 10 years to complete. This takes the total mission length to 30 years: 10 years planning, 10 years in space to reach destination, and 10 years analysing data.

The data comes back to Earth pretty much instantly, whenever the spacecraft are in view of the Earth, but it all arrives raw – a series of zeroes and ones. Huge amounts of data come back from the space missions that then have to be put into software and interpreted, Ian explains. ‘Even just sorting out the image data is an enormous amount of work.’

And don’t think the mission teams have rested on their laurels during the 10 years Rosetta and Philae were hurtling through space. The instruments were all launched without any commands, and their teams spent the following decade determining how to programme it to behave upon arrival at the comet.

‘You have an identical version in the lab, and you're learning how to do different things with that. You launch the hardware without commands on it, and then upload the control software over time,’ says Ian. This has to all be programmed into the instruments in advance of them taking any measurements, owing to the time lag in communication between Earth and the spacecraft. ‘It's not like you sit there with a joystick and control things.’

Putting people back on the moon

Even though this mission is viewed as exceptionally successful, there are no plans yet to go back to a comet for more information gathering. ‘It's an active topic of conversation now, what to do next,’ says Ian. The next logical step, he explains, would be to bring a piece of comet back to Earth for more in-depth probing. ‘But that's a huge challenge because you've got to collect the stuff, you've got to keep it cold all the way back, and all the way through the atmosphere, and then you've got to not contaminate it when it gets back on the ground. It would be a massively complicated business.’ 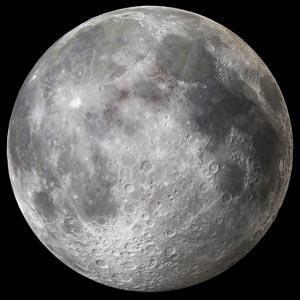 ‘We've got to find ways of practicing how to do that, and that is unquestionably going to involve the moon. The moon's going to very much come back into vogue and that's certainly our next venture, to build an instrument to go to the moon.’

The instrument – that will be very similar to the GC-MS on Philae – will take flight aboard a joint European Space Agency and Russian lander called Luna-Resurs or Luna 27. The launch date is currently scheduled for 2021. ‘My experience is that you're always optimistic with these things, and it won't surprise me if that slips,’ says Ian.

The purpose of the Luna 27 mission will be to look for volatiles at its south pole. ‘The reason is it's a useful resource, not just for possible astronauts staying on the moon, but as a fuel source. If you do simple electrolysis, you can then make rocket fuel. Most of the mass in a rocket launch is fuel, so you don't want to have to take more than you need. We'll ultimately be looking at ways of making rocket fuel to then send missions to other places from the moon.’

The beauty of exploring the moon compared to a comet for the analytical teams is a much shorter wait for data. ‘It only takes three or four days to get to the moon,’ Ian says.‘This mission is very much part of a campaign to think ultimately about sending humans to the moon. I think we will do this one first, and then the next one will be to start bringing samples back again,’ and then a crewed mission will follow.

‘I think these are really exciting times, and it's a great time for young people to get into the space business,’ he says. ‘The moon is going to be something entrepreneurs start getting into, in a really big way. I think it's a great time for youngsters to get into this, because they won't have to wait for national agencies to cough up money. There'll be all kinds of space companies operating, for all kinds of reasons, including tourism. They were talking about that when I was a little boy, but I think now, things are really in place to do this. The technology is there and there are individuals with just unbelievable wealth, who, if they want to do it, can do it.’

So, would Ian like to go on holiday to the moon? ‘Absolutely not, no. I'm not one of those people who wants to go into space. I like being in the lab, with a good feeling of gravity!’