How worried should we be about the toxins such as oxalic acid in our food? 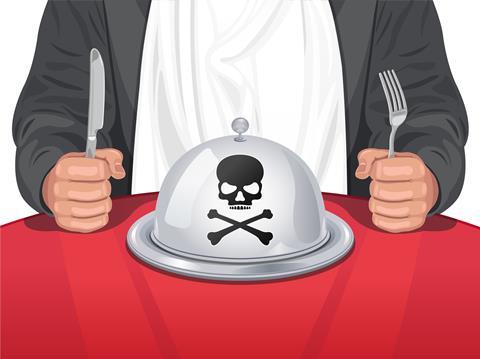 Bon appetit! Be careful what you tuck into

We talk a lot about what we eat. Are you a meat-eater or a vegan? Do you opt for gluten-free or whole wheat only? Do you buy organic food? Some choices are linked to fighting global warming and animal cruelty, but others come down to a more primal issue: food safety. We want to make sure the food we eat is good for us. However, the science shows us there is no escaping a little bit of poison.

Many foods contain naturally occurring toxins. The humble parsnip contains furocoumarins, which can cause gastrointestinal problems and severe skin reactions. Red kidney beans are full of lectins that will send you into bouts of vomiting and diarrhoea if you eat them raw – as few as four beans will do the trick, according to the World Health Organization (WHO). And bitter almonds famously contain cyanide, a chemical so deadly it’s been used in war and plenty of Agatha Christie plots.

Oxalic acid may be a toxic ingredient lurking in green vegetables but Advanced Higher students in Scotland will be familiar with it for other reasons. It is used as a primary standard and students need to be able to prepare it as a standard solution. It is important that students have an appreciation of the toxic effects of oxalic acid to allow them to handle the substance safely.

Many of the toxins found in otherwise harmless and tasty foods are produced as a defence mechanism. After all, plants are alive too and will try their best not to get eaten. ‘Plants can’t run away or hide from threats,’ writes botanist James Wong , ‘so they use a different strategy: chemical weapons.’ But we don’t see people collapsing due to having eaten a warmongering parsnip or a murderous almond. This is largely because what we consider food simply isn’t toxic enough.

As Laurie Dolan writes, ‘foods are regarded as such because they are edible.’ Food is only food if it doesn’t make us horribly ill. Many types of mushroom are dangerously toxic so we don’t consider them food, even if we eat other mushrooms.

There are strict regulations on what qualifies as food, and legislation and guidance are in place to keep food with excessively high levels of natural toxins off the shelves. For example, in the UK raw, unprocessed apricot kernels cannot be sold for human consumption unless the manufacturer can prove the cyanide levels are below a safety threshold.

One of the toxic substances in this article is oxalic acid. Advanced Higher students need to be able to handle and prepare oxalic acid safely. Solutions of oxalic acid can have serious systemic effects if ingested, and irritate the eyes and skin. Follow the instructions in this practical to safely prepare a standard solution of oxalic acid and then use it to standardise a sodium hydroxide solution.

In part because of natural toxins, no food should be eaten excessively or exclusively. For example, many green vegetables such as spinach contain oxalic acid. Oxalic acid binds minerals, eg calcium, so they can’t be used by the body. This can cause decreased bone growth and kidney stones. To avoid this, having a diet high in oxalic acid should be offset by mineral intake from other sources.

Bitter almonds famously contain cyanide, a chemical so deadly it’s been used in war and plenty of Agatha Christie plots

Greens are the perfect example of how to think about toxins in food. They are full of vitamins and minerals necessary for a healthy diet, and many people don’t eat enough of them. While it may be bad for us if they don’t form part of a balanced diet, most people who eat lots of green vegetables will never be affected by their toxicity. Sometimes, the toxin may even be the very thing that is good for us. ‘The beta-carotene that makes excess carrot juice a bad idea,’ James writes, ‘is also converted into vitamin A in the body, which is essential to our survival.’

Natural toxins are not the only potentially harmful molecules in our food. Both organic and conventional farming can use pesticides, though the number and types of pesticides differ. A pesticide is any chemical substance used to regulate, prevent or destroy pests. Whether or not pesticides are harmful to human health is controversial and the subject of ongoing debate. The WHO states that they are ‘potentially toxic’ but that the evidence is reviewed every year to keep safety information up to date.

This area is also tightly regulated. The UK government tests pesticide residues on foods every year, aiming to ensure that all residues are kept below a safe level. A 2017 report found that only around three per cent of foods had residues above safe levels and this was mainly due to imported foods, specifically beans in pods, rice and okra. For nearly all the foods sampled, the amount of pesticide a consumer would be exposed to was less than the maximum accepted level to eat every day for a lifetime.

Yet food standards aren’t the same all over the world. Famously, the practice of washing chicken meat in chlorinated water is common in the US, but it was banned by the EU in 1997. The chlorine wash is meant to get rid of microbes, but research shows that some dangerous bacteria such as salmonella survive. Instead, the EU approach is to ensure high levels of hygiene at the farm and the abattoir so chickens don’t need to be disinfected after slaughter. A post-Brexit UK-US trade deal could result in chlorinated chicken being sold in Britain.

At a time when we seem obsessed with the goodness of what we eat, we can rest assured that the small concentrations of toxins naturally found in food are harmless. However, we are protected by our safety standards. With a change in culture or politics, the idea of what is acceptable can morph too.

Article by Emilie Steinmark, a biophysical chemist and freelance science writer. Resource by Claire Ritchie, a chemistry teacher at Leith Academy and a lead teacher of chemistry in Edinburgh